It’s a familiar sight. The lone figure emerges from a vast western landscape. Riding high on his mount, he is stoic and directly perceived as determined and competent. In the case of Michael Winner’s Lawman (1971), one of the era’s better and more visceral revisionist Westerns, this solitary individual is also pulling along a second horse, over which is draped the lifeless body of another man, a man named Marc Corman. Marshal Jared Maddox, the eponymous protagonist of Lawman, played by a resolute Burt Lancaster, is the type of man who enters a town like Sabbath and instantly halts its day-to-day flow, as residents stop and stare in silence. Part of it has to do with the corpse in tow, but part of it is also the fact that a man like this is a man who impresses most people—“Don’t make an enemy of him,” says one onlooker. “Step wide of him.” Then again, there is Cotton Ryan (Robert Ryan), the town’s shaggy-dog sheriff. He’s not impressed. He knows of Maddox’s reputation (he used to have one of his own); the trouble now is that Ryan simply doesn’t care. Like most in Sabbath—like the entire town, in fact—Ryan acts under the shadow and thumb of powerful cattle baron Vincent Bronson (Lee J. Cobb). Ryan, as he readily accepts and admits, has been bought and paid for. 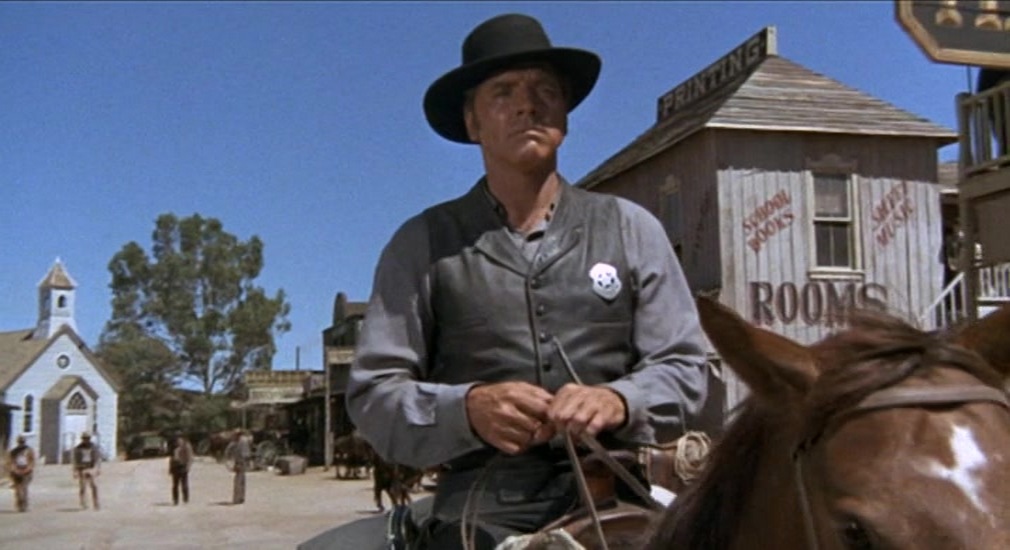 Maddox is a man on a mission, though. The ill-fated Corman was one of half-dozen men involved in a raucous stopover in Bannock, where a drunken night out culminates in a hail of bullets and the bloodied, albeit inadvertent, termination of a random bystander (amazingly just one, given how frenzied this introductory sequence is). The others are all indebted to big boss Bronson, but Maddox is there to collect. Sarcastically decrying the unruly evening, as what some may consider mere “cowboy fun,” Lancaster’s motivated peace officer embodies one who is incumbered by personal commitment and certified responsibility. The first is something that gives a man purpose in life, a reason for being; duty is what he is obliged to do, his occupation. Connected though they often are, these traits aren’t always in unison. For Maddox, however, they are—they’re one and the same. For better or worse, he is what he does for a living, and his profession is an all-consuming passion. Briefly seen in solo concert, playing his flute in a quirky bit of business frequently assigned to Spaghetti Western heroes, who often adopt a unique attribute or calling card, Lancaster manages to instill in Maddox a sincere respectability, despite his obstinacy and his capacity for vehemence. He is honorable, with steely, blue-eyed confidence and an uncanny aptitude for violence, but he can also be obsessive and unforgiving. According to former flame Laura Shelby (Sheree North), they call him the “widow maker.”

There is more to Lawman than Bronson versus Maddox, though, with Ryan playing ambivalent mediator. While it’s stocked with genre clichés and a bounty of hackneyed musings, the script by Gerald Wilson is noteworthy for its assembly of side characters. In his feature film follow-up to 1969’s Midnight Cowboy, where he appeared as oddball Mr. O’Daniel, John McGiver is Sam Bolden, Sabbath’s semi-comic mayor with a hearing problem. And just prior to his star-making and Oscar-nominated turn in The Godfather (1972), Robert Duvall is Vernon Adams, one of the wanted men, a callous but sympathetic hired hand who didn’t kill the Bannock victim but resists Maddox’s decree because he can’t afford the time needed to stand trial; he has land and animals that need tending to, which is perfectly understandable. There is also Crowe Wheelwright (Richard Jordan in his film debut), who voices his thoughtful reservations and has mature doubts about the merits of blind retribution. Then there is Harvey Stenbaugh (Albert Salmi), Bronson’s right hand, who has a touching, rather irregular relationship with his boss. Modern viewers will no doubt read into their closeness, especially as Cobb’s sensitive supervisor crouches on his knees, prays for his colleague, cries when he is killed, and repeatedly testifies to his value.

Wilson, who would go on to write several Winner productions, including the Western Chato’s Land (1972) and Scorpio (1973), also starring Lancaster, upgrades these characters by authenticating their moral ambiguities and affirming the sort of individual nuance that distinguishes superior Western films; there isn’t the resounding depth one sees in Ford, Hawks, or Mann, but there is more than usual. Perhaps the most significantly complete character is Bronson. Cobb, sans wig but with his typical snarl intact, presents a man with assured adaptability. Times have changed, he observes. Impatient and pragmatic and a little weary, he discourages the old ways of rushing into a situation with guns blazing, just because it’s the simplest thing to do; money now holds sway, and he would sooner pay his way out of a given situation—“No man needs killing,” he remarks. He knows the way of the gun and laments its unrelenting cause and effect, and in the end, in what is one of the more shocking and exceptional conclusions to a Western, he can bear it no longer.

Lawman’s West, like in so many Spaghetti Westerns, with which Winner’s film shares more than a few similarities, is a region worn down and parched, adorned with anticipating buzzards and stacks of bull skulls, all intimating prevalent death. Shot in Mexico but apparently set in California, the land is dusty and gritty and inflamed. It is a land suitable to the brash talents of producer-director Winner. Working with cinematographer Robert Paynter (one of their ten features together), the Englishman’s dramatic flair for visual impact is reinforced by aggressive camera movements, conspicuous close-ups filling the frame Leone-style—to the strains of Jerry Fielding instead of Ennio Morricone—abrupt, too frequent zooms, and jarring editing patterns between scenes, with cuts made just a second or two sooner than normal. Often criticized for his crassness (see the way he lingers on a horse cadaver consumed by ravenous coyotes), Winner finds in Lawman an ideal vehicle for high-minded ideals about the nature of violence, but also the truth of its inevitability. Lawman might present individuals capable of change, and indeed we see the evolution of several within the film, but like its depiction of a developing nation, with bureaucratic land offices and maps of deed boundaries, the impression of a settled territory is deceptive.

Released on Blu-ray from Twilight Time (where Julie Kirgo’s accompanying essay is the only supplement of note), Lawman’s ultimate view is one of alienation, social ostracization, and unfulfillment. In a world where violence begets violence, what exactly has been accomplished after its despairing and graphic finale? What is this world where a man can’t change what he is, as Maddox argues, because if he tries, something always calls him back? Be it a sheriff or a marshal, a lawman is, according to Lancaster’s laconic anti-hero, a “killer of men,” and with a post-Wild Bunch predilection for bloodshed, Winner’s brutality afflicts both man and beast—the proximity is part of the point.