Being raised protestant, specifically Methodist, I wasn’t fully immersed into the culture of the Passion of Christ. Although we recognized Lent and all the holy days leading up to Easter, we didn’t emphasize the suffering, but rather the resurrection part of the story. It wasn’t until I attended a Lutheran elementary and middle school, and later a Catholic high school, that I became familiar with the Passion and the legendary pageantry (and guilt) that accompanies it. My lack of exposure to this particular religious account might seem weird, but Catholicism isn’t as prevalent in the South. And in many protestant faiths Catholicism is often regarded as problematic, particularly with the church’s view of the Virgin Mary (the celebration of her “Immaculate Conception” for instance). I still remember the shock and bewilderment of attending my first Catholic Mass: the constant kneeling, lack of good old fashioned hymns, the copious amounts of incense and funny hats. But after a few weeks, mass became second nature. I felt like an honorary Catholic, but without all the obligations.

Our high school was relatively progressive and for years had a reputation for being a wild party school. The rumors were true, I’m afraid, and while I wouldn’t want my daughter going to a school like that, I had a blast. For parties, parents bought kegs and took away keys with the seemingly rational thinking that “well, they’re going to drink anyway, might as well make it safe for them.” We didn’t have nuns (although I’ve heard they’re back), and the two or three priests we had were very liberal, including one who rode a motorcycle and told us stories about his experiences at Woodstock. While it was a fairly laid-back environment, at least compared to many of my friends’ experiences with Catholic school, holy days were recognized with utmost reverence by participating in certain traditions and rituals. Every year we were “treated” to a live performance of the “Stations of the Cross.” (I say “treated” because it offered us the rare three-hour nap…that is, until one of the teachers popped you on the back of the head.) Another one of the traditions at the school was the mandatory viewing of Franco Zeffirelli’s 1977 television miniseries Jesus of Nazareth. (A six-hour nap for the teachers.) I can clearly remember Father G. rolling in that very small television and blowing the dust off the VHS tapes. If another class had checked out the set from the library he would bring in his homemade copy of one of the NBC airings. We always loved that because Father G. would spend the majority of the time struggling to fast forward through the commercials, and nothing is more entertaining to a teenager than a frustrated adult.

In all seriousness, most of us loved to watch Jesus of Nazareth because it felt like we were getting away with something. Religion classes were always incredibly boring and serious, so experiencing this story, the very backbone of Christianity, in such an epic, cinematic way seemed modern and relatable. It also helped that Olivia Hussey, the subject of many teenager’s sexual fantasies (thanks to the requisite viewing of Zeffirelli’s Romeo and Juliet [1968] in ninth-grade English class), played the Virgin Mary, as well as a very young, extremely attractive Ian McShane as Judas Iscariot. Now that I think about it, I’m pretty sure my classmates and I enjoyed watching Jesus of Nazareth for all the wrong reasons. A bit awkward, yes, but teenagers don’t usually concern themselves with such details when sex is involved. 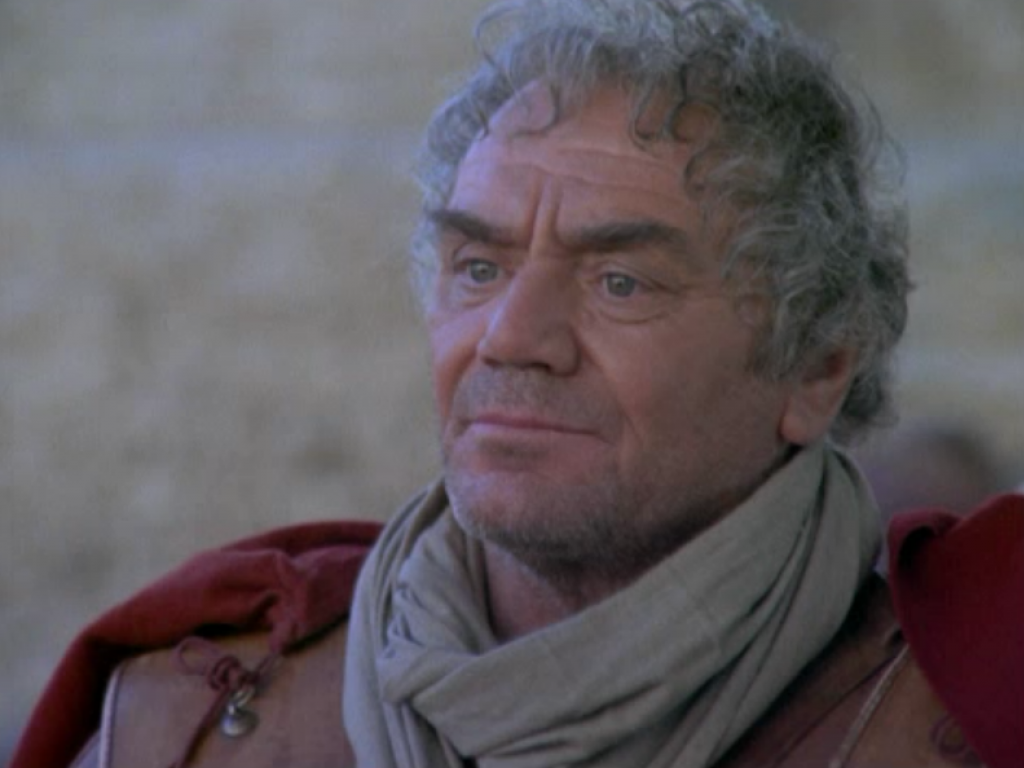 With Filmstruck adding Jesus of Nazareth to its catalog and it being at least twenty years since my last viewing, I decided to revisit the film, if only for the nostalgia factor. From the first notes of the musical score and the Love Boat-esque opening credits, I was immediately taken back to the cinder block, Cold War aesthetic of Father G’s classroom. Except this time, I watched the film for its artistic merit, accuracy in the retelling of the story and the performances, something I definitely didn’t care about or even noticed as a teen. Oh, and what performances they were. When I told a friend of mine about the cast of Jesus of Nazareth, which includes Anne Bancroft, Ernest Borgnine, Christopher Plummer, James Earl Jones, Donald Pleasence, Michael York, Claudia Cardinale, James Mason, Laurence Olivier, Rod Steiger, Anthony Quinn, among others, he joked that they must’ve spilled over from the equally star-studded Airport ’77 (1977). 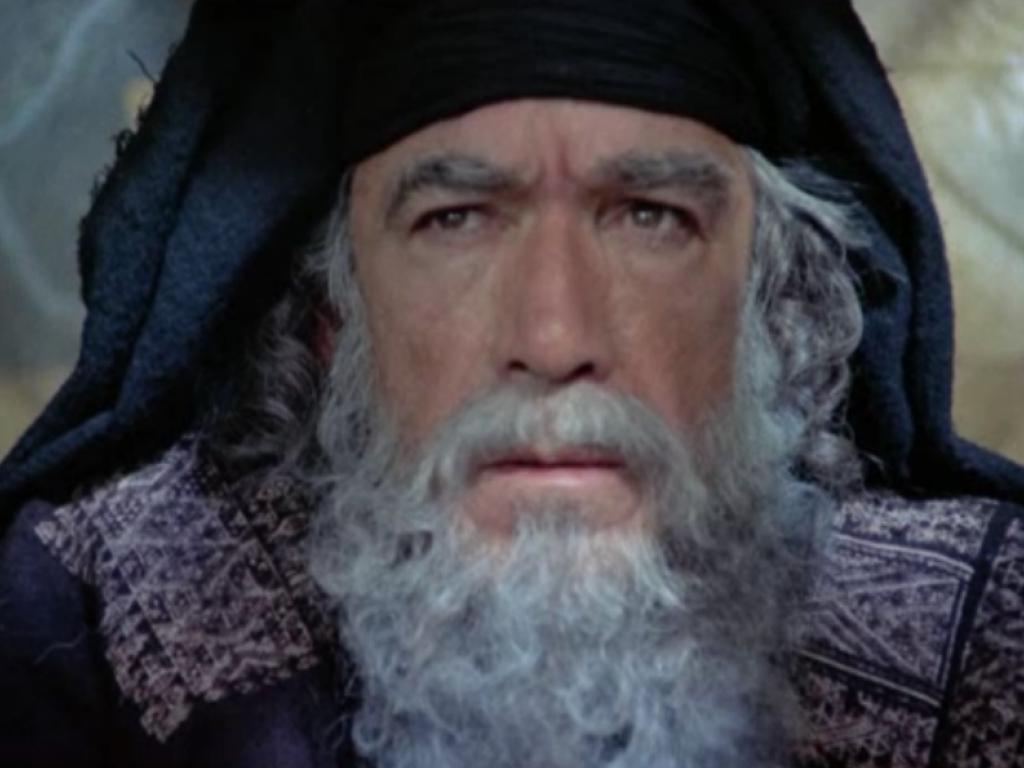 While Jesus of Nazareth is plodding and laborious at times, Zeffirelli, a devout Roman Catholic, is quite faithful to the story of Christ. At the film’s release, there was some controversy, as there often is with any religious-themed content. Many of the objections, though, came from ultra-conservative figures within the protestant church, who didn’t even bother to watch the film for themselves before making their criticisms known. Revisiting this epic as an adult was an entirely different viewing experience than it was when I was a teen. For starters, I noticed that Zeffirelli calls upon the sweeping biblical epics of the 1950s and 1960s for inspiration, but instead of larger-than-life sets and costumes designed more for technicolor than historical accuracy, he attempted a stripped down, more realistic tone. The all-star cast acts as support to the lesser known main players, so we are treated to a seemingly endless cavalcade of cameos. That’s not to say the film is without its problems. For example, a vast majority of the actors are of European descent, including Robert Powell as Jesus. And while his portrayal has been held up as the most “accurate” according to many American Christians, we know this is simply not true. Also, while Zeffirelli strives for authenticity, many of the actors in the film are sporting hairstyles of the 1970s, a common problem in historical films. Ultimately, these are minuscule issues when considering the length and breadth of this film, and Zeffirelli made it so that not only Christians can enjoy, but also made it accessible to viewers who are of different belief systems and cultural backgrounds. That said, for me, the nostalgia attached to this film is of more importance than the film itself. I watched the film with renewed appreciation, but it is forever linked to this thoroughly less-than-epic teenage experience. I’m sure that’s not what Zeffirelli was shooting for, but it was a fun couple of nights for me nonetheless.

This piece was originally published at StreamLine, the official blog of FilmStruck on April 16, 2017 and can be found archived here. 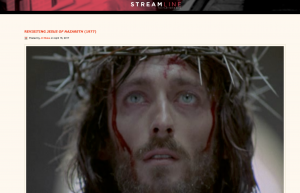