It’s good to be David Gordon Green. This is a man who can conceive of a movie in February, be in production in May, and be finished with the mixing by July of the same year; a man who who doesn’t need casting or Plan Bs because when he calls up his pals Paul Rudd and Emile Hirsch they say yes right away with nary a scheduling conflict. The director of Pineapple Express and All The Real Girls is a man who can get things done. This is made all the more impressive when you consider that Your Highness, his follow-up to Pineapple Express, lost $28.3 million and the film after that, The Sitter, while profiting almost $10 million worldwide, was a critical catastrophe, and for good reason. I’m not even trying to be glib. Prince Avalanche, written and directed by Green, is the mission statement of a man who doesn’t need your box office, doesn’t need your financing, doesn’t need your critical acclaim to do whatever he wants.

And he did what most writer/directors dream of: he wrote a two person, meditative dramedy set in the woods that he could shoot in 16 days for relatively little money…and it’s not bad.

Prince Avalanche is a remake of an existential Icelandic film, Either Way, about two men painting stripes on a road in the wilderness. It’s set in Texas in 1988 after wildfires decimated a rural community and thousands of acres of forests. Paul Rudd plays Alvin, the uptight, solipsistic, Henry David Thoreau enthusiast who has decided to spend his summer away from civilization, and his girlfriend, to whom he writes frequent letters and sends money. His objective throughout much of the film is to impart his hard won wisdom on his girlfriend’s doltish brother, Lance, his sole crew member for the summer, played by Emile Hirsch who…looks exactly like a skinnier Jack Black. Did anyone else see this coming? I just checked Google. Many people saw this coming. 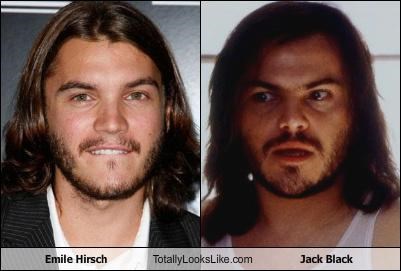 Once you get past the appearance, you’re stuck with, well, the facsimile of a Jack Black, performance, honestly. At the Q&A after the film, Green regaled us with a story of a screening where Emile had mentioned that he wasn’t used to people laughing at him. Given the roles he usually takes, that of course makes perfect sense, but Prince Avalanche proves that his talent has been egregiously wasted. Hirsch is delightful as the big hearted, horny buffoon, most likely because he cannot not take himself or his roles seriously. At one point, he tells a six-minute tear filled story about his weekend struggles to “get some puss” while battling utter exhaustion and unexpected self-doubt. It’s surreal and goofy and kind of wonderful. That blind sincerity in the midst of absurdity is what makes Hirsch’s performance alone almost worth the cost of the movie.

As for David Gordon Green’s performance, however, the film looks very much like what it is: a quickly thrown together, heavily improvised experiment in bromance that can never really figure out what it wants to be. The film drifts desultorily between Andersonian farce, indie drama, bawdy slapstick (did you know the word “caulk” sounds like “cock?”), and even, yes, Werner Herzog-like meditations on nature via slow-motion close-ups of insects and goats.

The film’s biggest misstep, however, comes midway through the movie when Alvin meets an older woman digging through the ashes of her home for anything that might have survived. The woman, credited as Lady, is played by Joyce Payne, a local from the area who literally had been searching through the ashes of her home for her pilot’s license, which happened to be made of paper. Green thought this woman sounded like a funny character so he more or less had her reenact her search for Rudd and the camera. I’m not sure what it says about Green that he thought this would be particularly funny, but the scene in all its pathos and loss becomes the centerpiece of the film. It has more honesty and weight than anything that comes before or after, and once you see it, you can’t help but speculate that maybe this film is trying to offer something more profound than what it seemed at first glance. Perhaps this film is about how we as people react when tragedy strikes, how we dig ourselves out from the ashes, how we start again.

Except it’s not! The movie isn’t really about that at all, and that scene has no business in this film. It’s the best scene in the movie, and Green should have left it on the editing room floor. Listening to him talk about the film, he kind of knows it, too, telling the audience at the Q&A that the scene pretty drastically shifted the tone of the movie from comedy to drama. Furthermore, Green was so unsure of how to use Payne that he introduced an inscrutable and unnecessary supernatural motif whose value remains utterly lost to me.

In the end, I feel ill equipped to persuade or dissuade anyone from seeing the movie. Paul Rudd plays Paul Rudd (not mad at that), Emile Hirsch plays Jack Black (surprisingly awesome), and David Gordon Green makes either a comedy or a drama about rising from the ashes or falling into them or both. Prince Avalanche is often funny, at times heartbreaking, and ultimately meaningless. It’s more or less the illegitimate child of All the Real Girls and Pineapple Express. But, man, I wish I were Green, able to grab a cast and a crew and make a movie at a moment’s notice. Even if that movie looks like something thrown together at a moment’s notice. Dude is living the dream.

About B.D. Hall 5 Articles
Brandon Hall is a high school English and History teacher, freelance essayist, screenwriter, director, and audiophile living in Brooklyn, New York. He was, at one point, an Associate Producer on a direct-to-DVD Cuba Gooding Jr. film called Linewatch (about which the first commenter on IMDb suggests is better than Taken! Which, woohoo!); he was a writer for Slate, that one time; and not so long ago, he was the editor-in-chief of a now-defunct music site called AudioVole. You can also see the last short film he made, Delusions of Love: A Case Study in Jealousy and 19th Century Formal Wear, if you're interested, here. He does not have Twitter, therefore you cannot follow him. Unless you find him. In which case you better be fast. Because he is.
Website

During the early 1980s, Woody Allen was having a particularly fertile period. In the late ’70s, after hitting it out of the park with Annie Hall, forever cementing himself in the pantheon of romantic comedy […]

GET ON UP, Get Into It, and Get Involved

By Wade Sheeler There’s a moment midway through Get On Up that defines the movie and sums up its skillful storytelling. Several black boys have been blindfolded, one hand tied behind their backs, painted numbers […]

From November to January, audiences become saturated with a slew of films destined for the red carpet. Formulaic trailers of complicated protagonists framed by big name directors have spawned endless online parodies. While those films […]