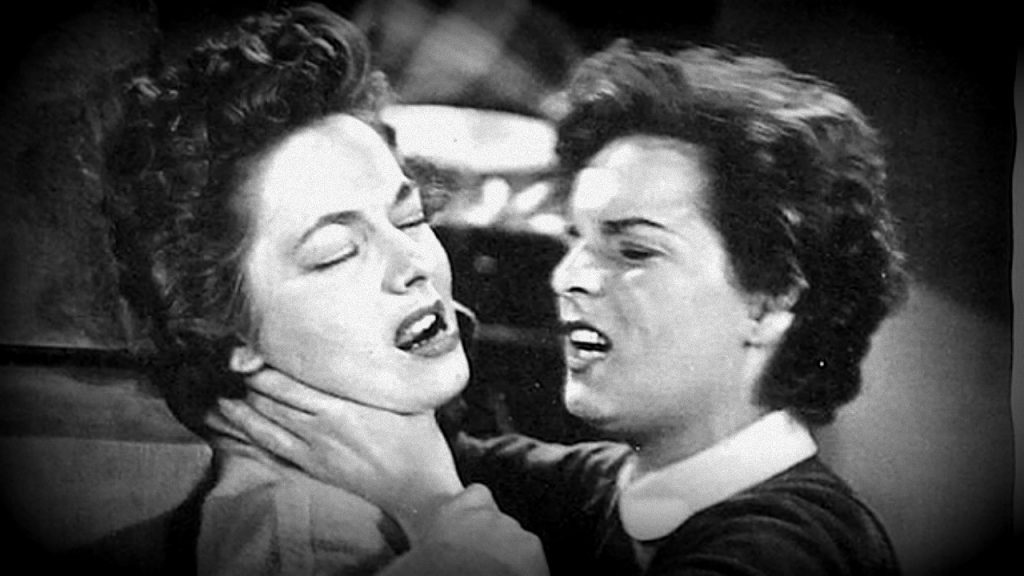 There’s nothing like an overheated melodrama to get the juices flowing, and Lightning Strikes Twice fits the bill. The great director King Vidor who, later in life, delivered some of the most eccentric and tawdry soap operas ever to grace the screen (Duel in the Sun, Ruby Gentry, The Fountainhead), fashions something akin to Rebecca (1940) meets the “is he or isn’t he a murderer” sub-genre of films like Undercurrent (1946) and The Two Mrs. Carrolls (1947).

Ruth Roman, who excels in the hand wringing department, is Shelley Carnes, an actress needing rest and relaxation, who journeys to Texas to convalesce at a Dude ranch and instead, lands herself in the middle of a southwestern potboiler. Recently paroled Richard Trevelyan (a very odd Richard Todd) was on death row for the murder of his beautiful yet promiscuous wife, when a technicality gives him freedom, but the stigma persists. Haunted and hiding out in a rundown ranchero, Roman happens upon him during one dark and stormy night. She’s immediately smitten, and all the evidence in the world can’t convince her he’s the killer everyone says he is.

Roman finally makes it to the dude ranch, only to discover its been shuttered. Still running the place are brother and sister Liza and String (Mercedes McCambridge & Darryl Hickman) and like everyone else, they’ve got secrets to keep, and pregnant facial reactions to give. There’s nothing like watching the scenery chewing McCambridge set fire to every set she walks onto, and Lightning Strikes Twice is no exception. There’s no subtlety ever from her, and we love her for it. That powerful voice and mannered performance; McCambridge was always an original.

Dewey eyed Roman is also a treat, as she gets to carry the whole film, and unleashes her own brand of over-acting, questioning whether Todd did or didn’t do away with his first wife, right up into the hot and sexy penultimate bridal suite scene. By the end of the film, everyone is doing their best to out-act one another, and in usual King Vidor fashion, he lets the actors get the best of him and the plot. McCambridge strangles Roman, Todd swipes at Roman, Roman flees from them all, and Zachary Scott, ever the cad, is waiting to pounce as well. For pure fun and escapist kitsch, you can’t go wrong with Lightning Strikes Twice. It’s pure electricity! 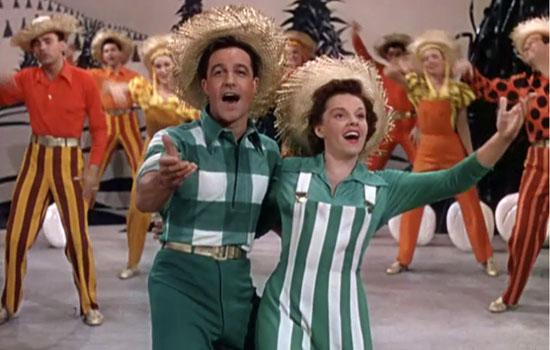 This fun, whimsical musical directed by Charles Walters was the third and final on-screen collaboration between Judy Garland and Gene Kelly. It was also Garland’s final film for her home studio MGM. During production, Garland was dealing with fragile mental health and her ongoing addiction to pills. And yet despite her frequent absence due to illness and a highly disorganized filming schedule, Summer Stock is one of Garland’s best performances.

Jane Falbury (Garland) is a farmer who is in desperate need of a tractor so she can bring in her crops on time. She approaches her boyfriend Orville and his father (owners of the local feed and supply store) for a loan. Jane’s sister Abigail (Gloria DeHaven) is supposed to come home to help with the harvest, but she has a big surprise for Jane: Abigail has brought an entire acting troupe with her so they can use the farm for their rehearsals. Jane is far from pleased, but seizes on an opportunity: in exchange for the rehearsal space, she insists that the actors must help with the many chores around the farm. The troupe’s director Joe Ross (Kelly) agrees to Jane’s terms. It won’t take long for Jane to discover that her new farmhands have never stepped foot on a farm, let alone worked on one. Kelly and Garland test the limits of each others’ patience, but once Kelly gets an eyeful of Garland’s hidden dancing talents … the mood changes.

Despite the tired “we’re putting on a show” theme, Summer Stock is a winner. The music is fun and the technicolor is bright and beautiful. Two famous musical numbers are in this film: the “Newspaper Dance” was Gene Kelly’s big feature, and Judy’s performance of “Get Happy.” There were rumors that “Get Happy” was actually a number cut from another one of Garland’s films, Easter Parade (1948), because of the drastic change in her appearance. Garland also opted to wear an outfit that was cut from Easter Parade, which only added to the rumors. According to Charles Walters, Garland’s weight was due to water retention (stress and pills), which is why she was able to shed the weight so quickly. 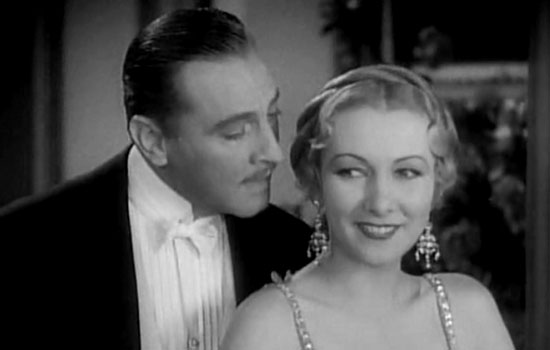 It’s always a treat to see the brothers Barrymore go at each other on screen like a pair of old battleaxes. The great Lionel and John appeared in five films together, the first of which is their rarest seen: Jack Conway’s  delightfulArsène Lupin is new to Warner Archive and is, by default, a film you must watch. The creation of French author Maurice Leblanc, Arsène Lupin first appeared in print in 1905, and this 1932 film is actually an adaptation of a 1915 play in which the infamous French thief pulls of an art heist and captures the Mona Lisa. This Hollywood film version is, therefore, duly … shall we call it … Continental. This racy, is pre-code murder mystery is sophisticated, adult, and more than just a wee bit naughty. Whereas The Thin Man was a product of the Hays Office (one foot on the floor, Mr. Powell, if you please) and therefore the playfulness of Nick and Nora was, although irresistible, entirely wholesome, this whodunit positively oozes sex. And, like, not fake movie sex, we’re talking … sex sex. Arsène Lupin is the Thomas Crowne of 1932.

Cantankerous police chief Lionel Barrymore has been in pursuit of France’s most notorious thief for years, and finally—finally—he think he’s got the culprit nailed.  And he has. We know from the first moment that the charmingly caddish John Barrymore is Lupin, and the fun of the film is watching the rake take the police chief on a wild goose chase of epic proportion leading to the Lupin’s climactic Mona Lisa heist. (Which, again, has Thomas Crowne writing all over it.)

At times Arsène Lupin is eye-rollingly implausible in the ok-no-way-in-hell-could-that-happen vein that is, let’s be honest, an earmark of many a Hollywood whodunit. But the brothers Barrymore are having so much fun that it becomes contagious. And my god, the double entendres. Barrymore fires off the innuendos to his crook-turned-spy-turned-lover with drop-the-mic finesse. (“Do you want to go back to playing your solitaire? Or would you rather something that involves … two people.”)

This a highly enjoyable caper that modern audiences will eat up thanks to its adult sensibilities, and it’s also a movie that film students will do well to take heed of for it dies the cast of the countless heist flicks to follow its footsteps.