This week, the Retro Set has given our weekly must-watch Warner Archive picks a  monster makeover in celebration of our week-long Monstravaganza celebration! The Warner Archive boasts a devilish array of horror and cult classics, perfectly suited for your Halloween adventures. Don’t have Warner Archive Instant yet? No problem: the service has a free one month trial!

This week, we’re giving you the movie that scared our creative director, Wade Sheeler, out of his wits as a child– 1977’s Demon Seed. The film that, in the opinion co-founder Carley Johnson, features a Doctor Frankenstein more terrifying than Doctor Frankenstein in 1935’s Mad Love. And, from co-founder Jill Blake, a good old B sci-fi monster flick, 1957’s The Cyclops. 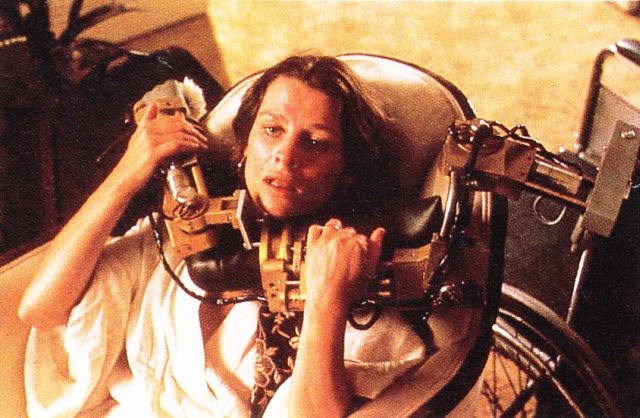 Man creates a computer that is so smart, so intuitive, it wreaks havoc with human frailty and error, to his detriment. We’ve heard and seen it all before; dating further back than HG Wells. But what makes this film (dare I say) “compelling,” is not the age old theme, but the bizarre ’70s “soft porn”  slant it takes. I was a wee child when Demon Seed was first released, and its TV ads showing a “soft focused” Julie Christie “moaning” as a robotic arm caressed her, made me uncomfortable, inconveniently airing while my family was gathered watching Fantasy Island. (True story, the networks did a terrible job at demographic targeting back then.)

The set-up is simple: Fritz Weaver plays a modern-day mad doctor who is more of a glad-hander and back slapper than a humble man of science. He has created the first hyper-intelligent computer that fills a warehouse with its hard drives and nuclear fusion and men wearing plutonium suits and stuff. He’s so ahead of his time, he has a computer terminal hooked up to the main frame…in his house! So he is “amused” when his computer asks the simple question “why?” The curious computer with the intimidating name, Proteus, immediately grows too big for its Robert Vaughn-voiced britches and takes over Weaver’s futuristic house, sealing his estranged wife inside, so it can do…experiments on her. Yes, it’s that creepy.

The brisk 94 minutes helps get the story moving fast enough that it skillfully distracts you from its many holes and contrivances. Even today, it’s surprising how fast Proteus turns into a monster with a thirst for knowledge as great as a vampire’s bloodlust. 2001: A Space Odyssey definitely set the standard for the benign computer transformed into a menacing villain, so Demon Seed needs little set-up to get you on board with the “technology is dangerous” scenario.

While I’m recommending this film as a good Halloween Sci-fi-er to stream, I’m loathe to do so without a major caveat: misogyny abounds. Julie Christie’s performance may be excellent as a nouveau riche “neglected” wife who discovers she’s no longer “in charge” of her household, but the inferred message that a strong woman needs to be abused, tied down and raped by a machine is more unsettling today than it ever was. So, tread carefully with Demon Seed. Its message may actually be the scariest thing about it. 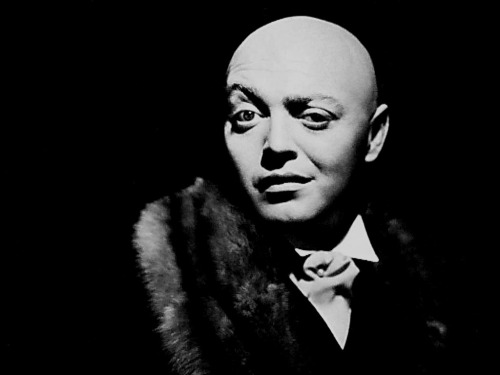 Know something? Obsession’s a bitch. A lesson that Peter Lorre finds out the hard way in the 1935 horror classic Mad Love, new to the Warner Archive Instant library just in time for Halloween! Shot by legendary Gregg Toland, this film is gorgeous Post-German Expressionism directed by the under-appreciated Karl Freund, a German émigré who was also quite the horror maverick. He was the cinematographer on Fritz Lang’s masterpiece Metropolis, brought The Mummy to life for the first time, and his final directorial work, Mad Love, has the grand distinction of being the great Peter Lorre’s English-speaking film debut. Aside from that, it’s a damn good way to spend 90 minutes. Tame by today’s standards on the shock-horror front, it holds up wonderfully as chillingly atmospheric, psychological Goth. Advertised upon its release as being “for adults only”, it is clear why: not for any monster gore– there is none to be found here– but for proactively adult themes of lust and sexual obsession.

Mad Love is glorious. Doctor Gogol, is a well-respected, gifted surgeon, played with quiet understatement by the magnificent Lorre. He is gentle … kind … caring … and he possesses a quiet that is almost deafening. He is also an obsessive lunatic whose lust after a married actress named Yvonne (Frances Drake) pushes him to grotesque heights. So obsessed is he, that he takes into his possession the actress’ promotional mannequin so it can be the private object of his physical lust. Yvonne’s husband is Stephen Orlac, a brilliant pianist, and she resists Lorre’s overtures as gently as possible. But when Orlac’s hands are mauled in a freak train accident, Yvonne comes to Lorre for help. Lorre, who will do anything for Yvonne, promises to find a way to heal her husband. His solution? A hand transplant. (This is a thing, apparently.)

“But … these don’t look like my hands,” cries Colin Clive (that’s Doctor Frankenstein, to you) as he awakes from the surgery. And he has every right to be alarmed: they aren’t his hands. Using the hands of a recently executed criminal—who was an expert knife-thrower—he successfully resurrects Orlac’s hands and both he and Yvonne hope his recovery will be complete. He does recover, but … there’s a teensy problem. The hands take on a life of their own. When his father insults his wife (“her income is small, but she could…uh…SUPPLEMENT it, eh?”) he grabs a dagger, hurls it at his father. Clive knows something is wrong, staring at his hands in Frankenstein-esque horror. (You half expect Clive to bellow in his iconic, quivery shriek, “They’re ALIVE! They’re ALIVE!”)

Yet, on an emotional level, Dr. Gogol is far from a Doctor Frankenstein. He is not fueled by ambition nor a thirst for fame. No, his thirst is more deadly; a thirst for the comforts of the flesh. “Why can’t I conquer love,” he cries out in desperation, and is slowly driven crazy by  Yvonne’s objections. Lorre’s enormous eyes betray a simmering madness as he begins to listen to the voices in his head, devising a plan to do away with Clive.

Gogol’s madness signals a change in pace: Freund knows that this is where the shit starts to get real. From here on out, we are at the mercy of the director’s relentless slow burn. Thoroughly engrossed in each and every character, Freund braids the admittedly ridiculous narrative together– tight and taught–and we believe each and every thread of it. “Each man kills the thing he loves,” the delusional Doctor Gogol repeats to himself in the final moments of the film. It is a truth reminiscent of the Frankenstein story, and in a way, true of all the really great horror films of the early ’30s. And as with the best of these early genre films, Mad Love is not about some garish monster; it is about the horror of human nature itself. 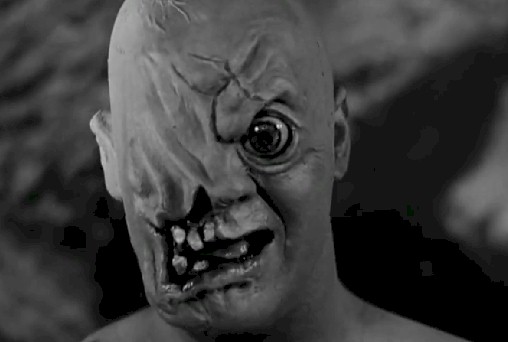 Pilot Bruce Barton (Dunkin Parkin) is missing and a search party led by his girlfriend Susan (the sexy B-queen Gloria Talbott) heads out to find him. Deep in the jungle they have some rather creepy encounters: giant bugs, lizards, rats. Typically this would tip-off a normal, well-adjusted person to get the hell out of dodge. But true love keeps Susan and her search party going until they encounter a giant cyclops man-beast who kinda looks familiar…

You guessed it: radioactive uranium is to blame here (lord love the ’50s), mutating  poor Susan’s boyfriend to monsterish proportions. This is music to the ears of veteran character actor Lon Chaney Jr., who is less interested in rescuing Pilot Parkin and much more interested in finding Uranium. But the rescue party soon becomes an escape party, as they race to escape the monster’s wrath.

1957’s The Cyclops is part of the monster hit parade of the 1950s. They were everywhere in the 50s: creatures from black lagoons, 50 foot giants, blobs, things, and them’s. Like all low-budget sci-fi monster flicks of the day, The Cyclops one hits all the requisite check boxes. Bare-bone sets? Check. Hokey dialogue? Check. Monster makeup that would make you the hit of every Halloween party ever? CHECK! You also get overgrown lizards and vermin — everything and anything you’d expect to see in a plane-crashes-on-uncharted-land film of the 50s.

Admittedly, the movie is … pretty bad. But it also falls into the so-bad-its-good category, which means that if you’re having a drink or two .. or three … this Halloween weekend, you might want to give it a try.