This year marks the twenty-fifth (!!) anniversary of The Simpsons’ annual Halloween tradition, the Treehouse of Horror. And today, FXX (now home to Every.Simpsons.Ever.) will air every.Treehouse.ever back-to-back in an epic marathon. (But don’t worry if you miss it, because like their slogan says, they really do have every single episode of the show archived on the new Simpsons World website and app.)

But as with the main show itself, there are definite hits and unfortunate misses among the Treehouse episodes. So, in the name of public good (yeah, right), I sat down this week and watched every single edition of the Treehouse of Horror, and now present to you my ranking of the series’ top ten segments.

Now, I’m as aware as anyone that Simpsons fans are quite the opinionated bunch, and that any top ten list regarding the show is immediately subject to debate. So check out my list below, and then, a la the inimitable Comic Book Guy, feel free to join us in the comments and tell me exactly where I’ve gone wrong with my life.

Bart: “‘Ding-dong ditch’ means you kill her, then you throw that ding-dong into a ditch! Geez, pick up a book.”

The Halloween episodes from the more recent years of the series’ run don’t reach quite the same sublime levels as those in the show’s earlier years (a charge generally levied at the series as a whole); regardless, they are typically among the most enjoyable each season. This riff on the Alfred Hitchcock-directed classic Strangers on a Train (1951) remains one of the more entertaining Treehouse segments from the past five years. It finds Bart and an initially unwitting Lisa pulling a “Criss-cross!” by swapping the murders of their respective teachers, and is worth watching for a fantastic chase sequence that mimics the close of the film, and a killer (no pun intended) ending scene that boasts a great reaction shot from Lisa and Edna Krappabel. 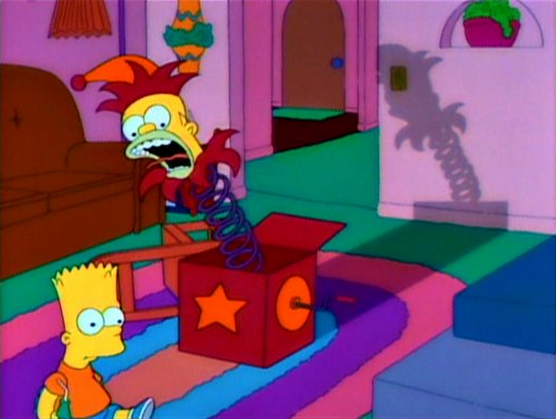 Homer: “He gets it from your side of the family, you know. No monsters on MY side.”

One of the eeriest episodes of the original run of the seminal sci-fi series The Twilight Zone, “It’s a Good Life” (first aired 1961), features child actor Billy Mumy as the worst kind of monster—an innocent-looking child who had unspeakable power over the world around him, and wielded it unmercifully. So why not give similarly unchecked power to perhaps the brattiest animated kid to ever walk the planet, just to see what happens? The result is a Treehouse segment that matches its inspiration for utter creepiness—and if you need further proof of that, recall the transformation of Homer into the Jack-in-the-Box (hey, a Jack-in-the-Box is just a creepy town under any circumstance). And yet it’s absolutely hilarious, particularly the ending, in which Bart awakens from his nightmare, screaming in terror after a super-tender moment with Homer. 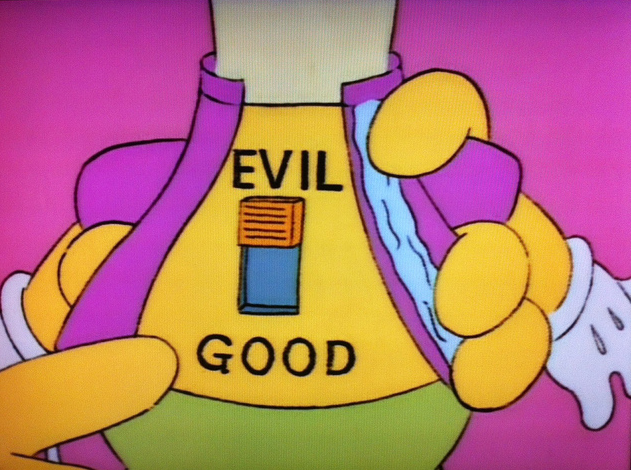 It’s the more inanely irreverent moments in The Simpsons that sometimes make the most impact—a throwaway line, a random odd reaction to the events in a particular episode. And for me, Homer singing about his bologna in the bathtub, and then streaking across the kitchen, screaming and naked, while the titular murderous Krusty Doll chases him with a freaking HARPOON, of all things (Patti: “There goes the last lingering thread of my heterosexuality”), is one of those moments. The plot of this segment—which draws its inspiration from the 1963 Twilight Zone episode “Little Girl Lost”—is solid but relatively inconsequential, because this is the scene I will always remember, and the one that still makes me guffaw every time I see it.

Ned Flanders is the Devil. Somehow, we always knew this. This take on the 1941 film The Devil and Daniel Webster finds Homer succumbing to the allure of a “forbidden donut” and being forced to fight for the freedom of his soul in the Court of Infernal Affairs. But first, he has to spend the day in Hell. The animation in the Hell scenes is appropriately disturbing (especially the moment when Homer is sliced and diced by a demon, and his muzzle and shoes are distributed into a bin marked “Hot Dog Meat”) and yet also incredibly funny, as when Homer’s “ironic punishment” falls brilliantly flat. Still, amid the horror, the resolution of Homer’s trial is actually quite sweet, and reminds us that even in its most outlandish, reality-bending episodes, The Simpsons is largely driven by pure heart.

Of course, that’s all dashed to hell in the end, with that immensely hilarious pay-off shot of Springfield’s hungry police force. 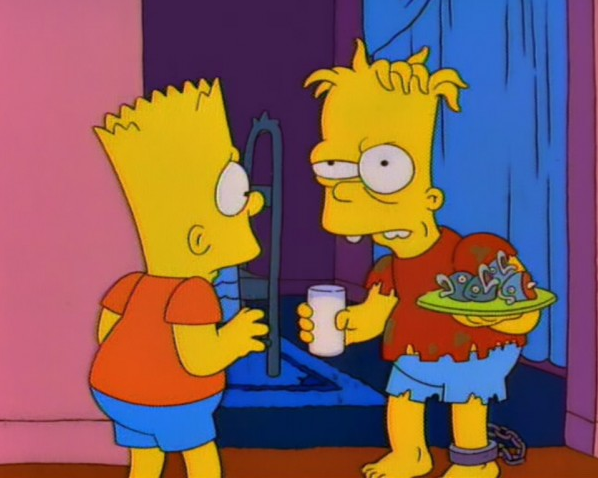 Bart: “Hey, can I have some turkey?”
Marge: “No, you finish your fish heads. Then we’ll talk.”

Bart and Lisa discover a creature living in the attic, whom they soon learn is Bart’s evil Siamese twin, Hugo. A simple enough set-up, but cleverly constructed with enough wit and genuine scares (pigeon-rat, anyone?) that it transcends cliche. The segment is really made by its twist ending, which in retrospect is all too appropriate–I mean, there’s little doubt that Bart is pretty damn evil all on his own, right?

This segment is featured in what is perhaps the most solid overall Treehouse episode, which also includes “The Genesis Tub” (another great Twilight Zone-inspired bit) and “Citizen Kang,” a 1996 election parody that actually boasts a number of fantastic lines on its own (but because its subject matter dates the whole thing terribly, I gave a slight edge to “Thing” in my choice here). 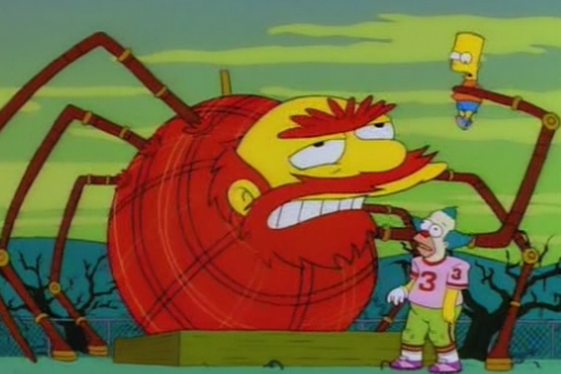 Homer [reading a warning sign on the school thermostat]: “‘Do not touch Willie.’ Good advice.”

The best Treehouse episodes, to me, are the ones that boast honest-to-God chills. And as someone who still has not managed to sit through the entirety of the first Elm Street film (nor any of its ubiquitous sequels) out of complete chickenshitted fear, I find The Simpsons’ take on the Freddy Kreuger character to be genuinely frightening at times. And Groundskeeper Willie as Freddy? It’s an appropriately unnerving cast choice. Like the films it parodies, “Nightmare” utilizes a number of creative death scenarios for the various kids, with Martin’s dream demise marking a particularly chilling moment (one that is thankfully leavened by the reaction of the children who are mistakenly subjected to the sight of his terror-stricken corpse). The final battle between the three Simpson children and Willie is well-constructed, though admittedly the weak slapstick ending tends to detract from the overall tone of the segment. 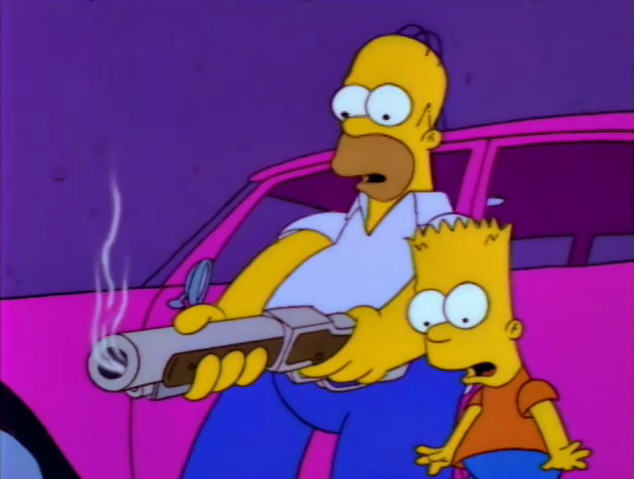 In this mashup of Night of the Living Dead (1968) and Pet Sematary (1989), Bart discovers the friendly “Occult” section of the elementary school “book depository” while searching for a tome for his book report, and his subsequent efforts to bring Lisa’s cat back to life via a dark spellbook instead bring a cadre of zombies to Springfield. This is one of those episodes that is jam-packed with gags, from the supposedly nonsensical magic phrases (“Trojan Ramses Magnum Sheik!”), to humorous bits derived from familiar characterization (of COURSE Homer doesn’t have enough brains to satisfy the zombies … though it is still hilarious to watch them knock on his head like a coconut, and to witness Homer’s outrage as they abandon him for brainier pastures), right up to the slight twist of an ending. And of course, the famed exchange above, as Homer nonchalantly blow-diddly-ows away his bothersome neighbor, is one of those iconic quotes that simply defines the show in all its irreverent glory. 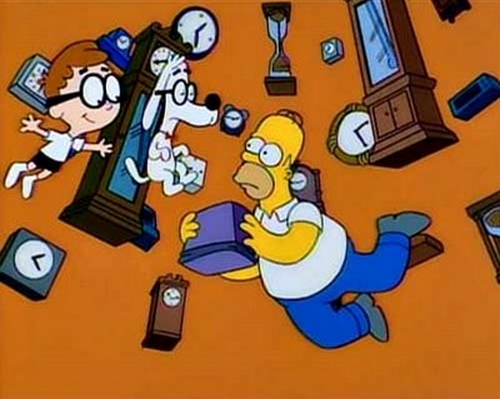 A malfunctioning toaster–enhanced with nuclear material he likely stole from work–sends Homer, the “first non-Brazilian person to travel backwards through time,” to the prehistoric era, where the slight changes he makes alter his personal timeline. Each subsequent trip he makes to try to correct his mistake only makes things worse, leaving Homer to cycle through a seemingly infinite number of possible realities (including one in which stupid Flanders is the supreme leader of all mankind) in an attempt to find “normalcy” again. Inspired by a 1952 Ray Bradbury story, “A Sound of Thunder,” this segment is wonderfully and delightfully weird, marked by the endlessly inventive scenarios in which Homer finds himself.

And honestly, is there anyone who doesn’t feel even the slightest bit rueful for Homer when he leaves his own personal paradise too soon to notice its perfect finishing touch—rainstorms of donuts falling from the heavens? 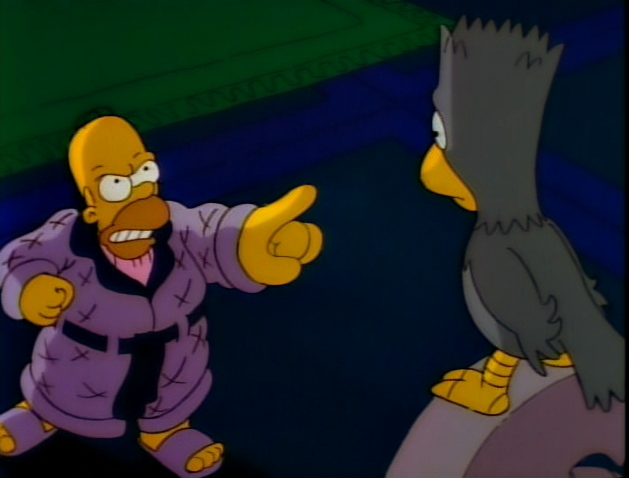 Maybe it’s the English-major nerd in me, but from the first time I saw The Simpsons’ take on Edgar Allan Poe’s 1845 poem “The Raven”—the final segment from the inaugural Treehouse of Horror episode—I absolutely loved it. Every element works together beautifully, from the pitch-perfect narration of James Earl Jones to the casting of Bart as the titular smart-assed bird. But what ultimately makes this one a thing of pure animated beauty is Dan Castellaneta’s vocal performance. I never fail to laugh at his delivery of the repeated line, “Take thy beak from out my heart and take thy form from off my door!”—the first instance drips with utter frustration and anger, the second with very tightly-banked rage that then explodes gloriously. Perhaps it’s not the most accurate retelling of the poem, but it’s nonetheless an effective balance of unease and humor.

Okay, seriously, anyone who doesn’t like this excellent take on Stanley Kubrick’s 1980 horror classic The Shining needs to have their head examined. Hands down, “The Shinning” represents the perfect marriage of parody and genuine scares, with a hefty dose of wit and goofiness. Like the best Simpsons episodes, it’s infinitely quotable, and like the best parodies, it retains enough of the source material to invite familiarity, but skillfully twists it just enough to get the most effective laughs. Homer’s Jack Torrance-esque descent into madness is both terrifying and hilarious–Castellaneta’s obvious riff on Jack Nicholson’s performance here works beautifully. The recurring gag with Groundskeeper Willie (here cast in the Dick Hallorann role) being hit in the back with an ax is bizarre and yet serves as an unexpectedly effective link between the three segments of this particular episode (which also includes the fantastic “Time and Punishment” and the just-okay “Nightmare Cafeteria”). All in all, it’s just pretty damn great.

The Academy Award for Best Short Subjects, Cartoon (now known as the Award for Best Animated Short Film) was fairly dominated by one studio in the 1940s. With the exception of two awards won by […]