Before personally getting my hands on the Criterion Collection’s release of David Lynch’s debut feature film Eraserhead, I looked at some screenshot comparisons put together by the good Gary Tooze for DVDBeaver (which you can see here). I was less than enthusiastic. It was too dark for my taste and there was very little in the way of what I thought was “good image contrast”, to a point where a few shots seemed barely discernible. But, it was, as the sticker on the package proclaimed, “Director Approved”, the back reading that the transfer was from a “New 4K digital restoration, supervised by director David Lynch”. And so, I thought, “I don’t like it, but if the master says so…” And he does. Seeing the film in motion is a different experience from just looking at a bunch of screenshots, for Criterion’s transfer of Eraserhead truly captures the darkness of the film in a way that it hasn’t been captured before.

As Lynch recently stated in an interview with Vulture, no one is “right” about the meaning of Eraserhead, but he said he “like[s] to have people be able to form their own opinion to what it means and have their own ideas about things.” For what it’s worth, this darker transfer brings out a new reading, for me at least. To phrase it in a perfectly cliché way, Eraserhead is about darkness. 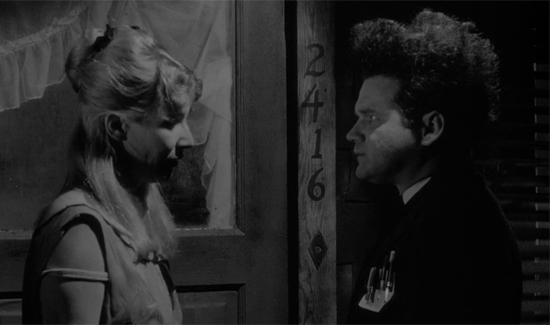 Every frame of Lynch’s film is mired in deep blackness and mystery, even its puddles of bodily fluids are seen as inky and oily. Lynch, and cinematographer Frederick Elmes, paint every frame a vaguely Bacon-esque picture, surreal and entrancing, its blacks containing an abyss like depth. That certain scenes are hard to see, devoid of the contrast boosting of previous releases of the film, seems to accentuate bizarre atmosphere. The face of Beautiful Girl Across the Hall (as she is credited in the booklet, played by Judith Anna Roberts) is rendered in a hazy darkness, her skin ashen, shrouded in the gloom of the hallway. Even when Harry (Jack Nance) is with her, she is, as is every other character in the film, a mystery, a beautiful nightmare.

Which leads one to realize that everyone in the film is a monster in some way. Everyone has that vaguely diabolical dusk in their soul. Harry is hardly an innocent in the film, despite Nance’s excellent nebbish quality he brings to the character; he avoids and skirts his responsibility as a father. (Certainly one of the many interpretations of Eraserhead is that it is about the fear of fatherhood.) Mary (Charlotte Stewart) is just as guilty of this. Her parents, Mr. and Mrs. X (Allen Joseph and Jeanne Bates) are angry and aggressive, abrasive and annoying. It is Mrs. X in particular that seems the most cutting, as she interrogates Jack as to whether he and Mary had sex. It isn’t that the accusation is itself unwarranted, but as she corners Jack, it seems more like a strange way to pin him down. There are claws. It definitely makes sense that she, the mother of Mary and the grandmother to the Baby, would want to make Jack take responsibility for his actions, but it’s almost as if that isn’t even her goal. If we accept the film from Jack’s perspective, she’s there to humiliate him. Up against the wall, the lights shine down on them creating chiaroscuro in the frame. It’s darkness both from the assumption on Jack’s that Mrs. X wants nothing but to demean him, and then the blackness in this vision of Mrs. X’s heart. 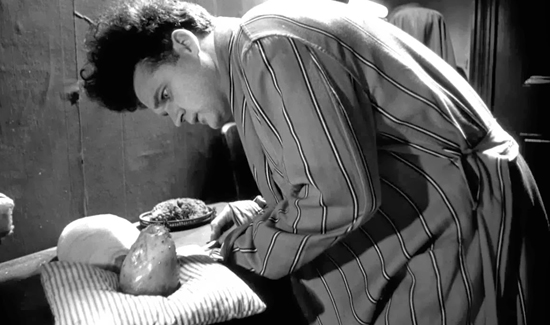 Is the only character exonerated from this darkness the baby? Not quite; this child, deformed and helpless, seems to be a product of antipathy and ambivalence, with both parents unwilling to look after them. They get the worst of both worlds. They are the result of soulless creatures coming together to create another being, unlucky and doomed.

Lynch’s Eraserhead is fueled with gloom and blackness–a twilight that’s infinite and abyss-like as it examines the dusk of humanity. Criterion’s new Blu-ray and DVD transfer is the best possible way to be submerged into that distinctly gloomy, cynical, black universe. Perhaps making the image darker was an act of compensating for how bright television and computer screens are today, but it makes it the most artistically sound decision as well, because even the images hardest to see envelop you and plunge you into that deep nigrescence. As Lynch forces you to stare into that pit of blackness, you’re staring at soullessness. 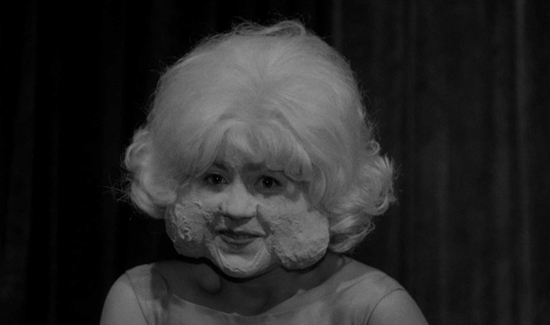 There couldn’t have been more than 50 of us. Many came wearing baseball caps and shorts, toting satchels and backpacks. More than a few wore tennis shoes. As for myself, I wore a loose V-neck […]