Remakes are not always going to be weaker than the originals; and just as well, originals are not always superior. A case in point is Ransom! the 1956 crime thriller about a wealthy, high profile business owner whose son is kidnapped, and the tense 48 hours that follow. It was remade 40 years later (without the exclamation point) starring Mel Gibson, directed by Ron Howard. Both share important plot points (most famously, the millionaire going on television with the ransom money spread out in front of him, to declare not only will he not pay the ransom, but the money, instead, will be used as a bounty on the heads of the kidnappers) but where the original keeps the story mostly inside the house, the ’96 version takes us outside the world of the wealthy parents. Not only that, but the remake brings in a whole other layer where we learn the motivations and the surprising identity of the mastermind. This does not make the Ron Howard version better, it’s just…different, and worth a look as a double bill with the original.

The 1956 Ransom! (love that exclamation point) is not actually the original either. Based on an episode of the (surprisingly) popular anthology series The United States Steel Hour, called Fearful Decision, the roots are there, in a much more truncated version. In fact, the film’s director, Alex Segal, mainly worked in television, and had helmed several episodes of Steel Hour, so it naturally followed he would take the adaptation into theatres.

Starring Glenn Ford and a positively galvanizing Donna Reed, the film is a thunderbolt through the heart of what audiences expected to see represented in a 1950s bucolic film family. It doesn’t stand up to the superior The Desperate Hours, William Wyler’s take on an entire family held hostage in their own home, with its sexual and sado-masochistic overtones, released a year earlier in 1955. But it still packs a wallop when the family, achingly sweet, is torn apart by the kidnapping. Ford’s character, Dave Stannard, is a loving father but a shrewd and calculating business man; a risk taker. When he comes home early from work one day to help his son build a fort, a casual phone call soon reveals that their son, Andy, was “supposedly” taken to the doctor’s office from school by a nurse, but as Ford follows up, he discovers the doctor never sent for him. Slowly, the unthinkable truth sinks in, and as Ford struggles to control the situation, his wife loses it. Reed’s palpable freakout, at first just bubbling under the surface, then transcending into hysteria, is a marvel to behold. 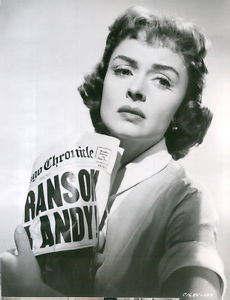 The police arrive, tap the phone, and wait for the kidnapper to call. And he does. We never hear him, but watch in agony as Ford tries to reason with the criminal. The deal? Ford must come up with 5 million dollars, and signal the money is ready, by way of the host of a TV show Ford’s company produces, wearing a white tuxedo jacket on air. Ford goes through with the raising of funds, which his board of directors help pull together, but at the appointed hour, he appears on camera with the money, and makes his solemn and unorthodox declaration. This sends his friends, townspeople and wife into a frenzy. His wife accuses him of having to always “one better” the competition. But it’s more than that. He is utilizing his capacity as a “risk taker,” but instead, a conversation he has with a newspaperman (a scenery chewing Leslie Nielsen) reveals that the odds of getting his son back alive are exactly the same whether he pays the ransom or not. And the chief of police offhandedly comments that if parents stopped paying ransoms, it would no longer be an incentive for would-be kidnappers.

I’m not one to drop spoilers, so the question of whether Ford’s gamble pays off or not will have to wait for your viewing.

The 1996 version, along with the secondary plotline that follows the kidnappers and reveals the nightmarish scenario the millionaire’s son goes through, also has an interesting revision to the police. In the 1956 version, the local police handle the case. But they are so ill-equipped to deal with the crime, it is almost laughable. The chief of police admits all he’s expected to do is “uphold the law,” whatever that means. In the remake, a crack team of FBI agents, trained in kidnappings, jumps on the case, ably supervised by a very trustworthy and experienced Delroy Lindo. It’s all the more suspenseful when Mel Gibson’s father goes against everything he’s been told to do by offering up the bounty.

While the original is a study in tension and patience, revealing slowly and methodically who will crack on the side of the family, the remake is less interested in the psychological impact of a kidnapping, but more of a whodunit– questioning whether the guilty will eventually be discovered and pay. Both are fascinating and worth reflection, and in the end, they are two very different stories.

The beautiful release of the 1956 Ransom!, through Warner’s Archive Collection, is a great platform to watch the tense thriller. Draw your own conclusions, but the original and the remake are two fitting entries into the same concept, with wildly different outcomes and renderings.

When it comes to the network’s annual “Summer Under the Stars” celebration, which dedicates 24-hour block programming to an individual actor each day throughout the month of August, few names on the roster personify the […]