By 1955, the House Un-American Activities Committee was viewed with a more critical eye by the rest of the country. Previously, it had been a polarizing body, striking fear in the hearts of all Americans for its Fascist, witch-hunting tactics to “root out Communism at all levels.” While Hollywood executives had acquiesced under its thuggish behavior, the majority of its producers, directors and actors hated its very existence. Throughout the late 1940s, there were many films made as pure propaganda to assuage the suspicions of HUAC, and to prove by fearful studio executives that they were sympathetic to the cause. Throughout the mid ’50s and early ’60s, Hollywood and independent producers released a slew of well-meaning, but politically dogmatic stories. One such is the muddled but still gripping courtroom drama, 1955’s Trial.

Trial is confused for several reasons, mostly due to the filmmakers’ attempts to take on too many subjects. The film attacks racism, communism, extreme liberalism as well as extreme conservatism, with a little disdain for commercialism to boot. Somehow, in the midst of this political miasma, a good film survives.

Glenn Ford plays law professor David Blake who is on the brink of losing his job, as the university wants their department head to have some courtroom experience. Blake may be a crackerjack instructor, but he has no real world background. Over the summer break, he canvasses as many law offices as possible, asking to work pro bono, as an aid to gain the experience he needs to get back on the job come fall. Most of the trial attorneys laugh off his request, until he happens upon Barney Castle (Arthur Kennedy) a shark of a lawyer looking to land the defense of a Mexican teen (Juano Hernandez) accused of rape and murder; the sensationalistic story that has been splashed across the country’s headlines. Castle is strangely enthusiastic to hire Blake, not just to assist, but act as the trial attorney while he, Castle, goes about raising funds and awareness for the Angel Chavez campaign. Blake is quickly schooled on the other side of the law, the backroom dealings, cronyism, corruption and political wheeling and dealing that are part-and-parcel with winning a case. His real-world education is ably assisted by Castle’s secretary, Abby (Dorothy McGuire).

As Blake interviews Angel, and it becomes ludicrously clear the boy is innocent; the young “white” girl’s death exacerbated by a weak heart, he shudders at the brutality the boy is dealt, not only from the small town mayor who would just as soon let a mob breakdown the jail walls and lynch him, but his own mentor, Blake, who uses brute force  to try and get a confession out of him. 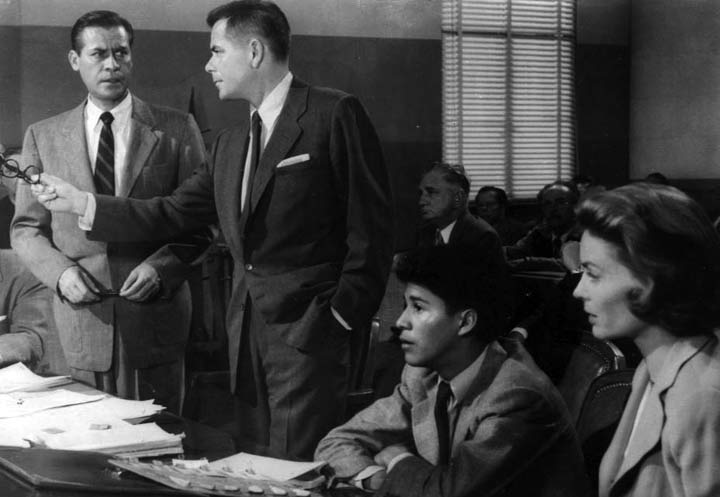 The nature of the trial becomes more strained and politically motivated; the judge is black, which brings into question Blake’s own inherent racism, and the slow process of selecting a jury a greater center-piece than the trial itself. But Castle is almost completely absent from the trial, running around the country, “raising funds.” Once the trial commences, Blake is called away by Castle for an “important meeting.” Against his better judgment, and spurred on by Abby, he heads to the meeting, only to learn it’s a huge commercial Communist Party fundraiser, brazenly run by Castle, who admits how great it will be for the “cause” if Angel is found guilty, motivating stronger support for the party. Blake returns to the trial feeling used and humiliated. Even worse, he’s now being subpoenaed by a House Subcommittee for his political affiliation. In the end, Blake finds himself defending the boy not just from the District Attorney’s office, but his own associate, Castle.

Released the same year as Blackboard Jungle, Ford was having something of a resurgence; once seen as the young leading man of such classics as Gilda and Convicted, he was now being cast as morally complex and conflicted men of substance, a main ingredient of noir, and helped him continue as a staple of the genre.

Arthur Kennedy, who made his name onstage with naturalistic performances in The Glass Menagerie and All My Sons, was a Hollywood mainstay in supporting roles throughout the 1940s, delivering stronger performances in the ’50s as likable rascals and morally ambiguous heroes. You never know with Kennedy if you can trust him or not, as evidenced by his work in Anthony Mann’s classics Bend of the River and The Man From Laramie. As Barney Castle, Kennedy received a Golden Globe and Oscar nomination.

Director Mark Robson, who had cut his teeth as editor of Citizen Kane, and several Val Lewton horror classics like Cat People and I Walked With a Zombie had a perfect visual sensibility as well as a unique gift for economic storytelling. It’s his stewardship that helps keep Trial on course, even as it navigates through many odd subplots.

In the end, Trial is an unusually told story that may not have a completely satisfying conclusion, but still delivers enough surprises and revelations that it’s worth the time spent. It’s not a hot mess, but it’s definitely confused; a perfect representation of how fragile and complicated the country’s politics were at the time. 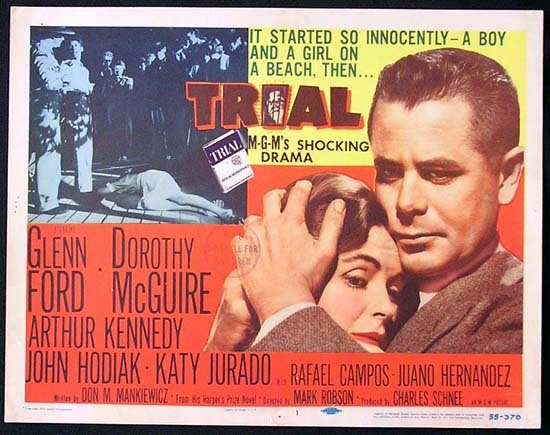 Trial is available as an MOD through Warner Archive Collection

Today, April 5, 2016, is the centenary of Retro Set fave Gregory Peck; beloved actor, philanthropist, and model humanitarian. Peck was viewed as the ultimate good guy, a role model both on and off screen […]