The further we get from the 1990s, the more it becomes clear that it was probably the last great decade of truly original, creative product to come from mainstream Hollywood. (Unless of course the 2010s do an abrupt about-face and prove me wrong and Hollywood starts to, once again, assume that audiences actually do have brains.) Sure, there were franchises then, but  not every single film produced with a moderately successful sales return was re-purposed for sequels of the exponential kind. Of course, the ’90s wasn’t without its share of extraordinarily mind-blowing bombs. (Cool As Ice, anyone? Suburban Commando? Yikes.) But looking back, it is quite clear that the good far outweighs the bad, and ’90s cinema is the result of a Hollywood system that was still willing to take risks on solidly good original storytelling. It was, of course, also an exciting, wonderfully creative time for independent filmmakers– indie’s golden age–with Tarantinos and Soderberghs and Coens and Lynchs and Van Sants establishing a framework that would redefine the very nature of the film industry intself.

The decade was also an all-around great decade to be a teenager who loved movies, like me. (Mind you, movies, not fashion. Coz …stirrup pants.) It was also, as fellow ’90s alumni no doubt remember, a great decade for swing music.

In a magnificent renaissance, swing music resurfaced somewhere in the early 1990s and lingered in popularity for much of the decade.  Especially, it seemed, on film. And hearing it in a theater with that newfangled surround sound contraption on a big screen, made it positively electric.

For myself and many others of my generation, the decades old artform of swing music was new, exciting, fresh, glamorous, and the challenge to master it, I must admit, made for some fantastic competition.

The films below are by no means conclusive, they’re simply the ones that made the biggest impression on my swing-loving soul.

Ok, so. The movie itself is fractured. And I know there is quite a serious issue about the theme of the movie: while thousands upon thousands of their fellow Germans were being rounded up and slaughtered, these kids rebelled by night with American dance—but still played by the Nazi’s rules by day. Of course I get the issue there. But with that out of the way … this film had one hell of an influence on many kids my age. It was our first introduction to swing music, swing dancing, the slang, and that amazing style of dress. We’d really never seen or heard anything like it before, and its soundtrack was a huge favorite. My girlfriends at school and I experimented with “victory curls”, bought red nail polish, wore out our VHS tapes trying to understand the basic steps in the dance sequences, and wore out our cassette tape soundtracks.

A LEAGUE OF THEIR OWN 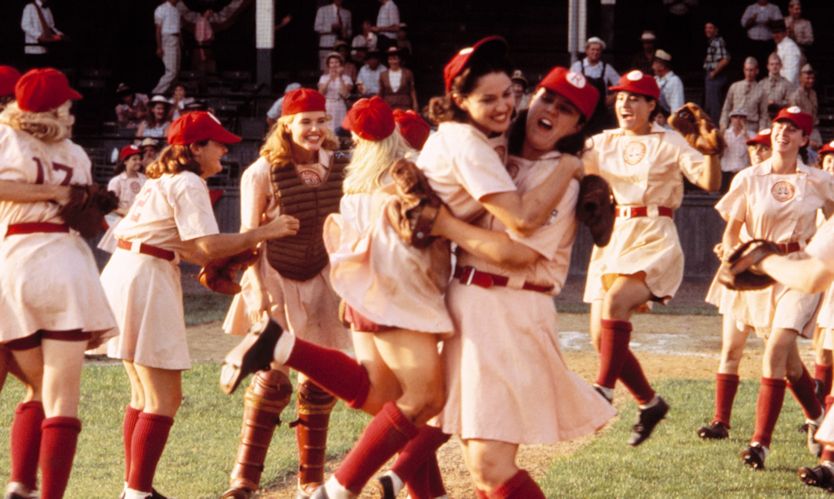 Definitely THE movie for any 11-year-old girl. Not only were the dresses and hair and shoes gorgeous, the fact the girls kicked ass was totally liberating. Geena Davis, Lori Petty and Madonna were, to us, role models in this film. My girlfriends and I stormed the Principle’s Office after watching it, demanding we be allowed to play baseball with the boys at lunch. He allowed us, and for about a month we were vigilant in proving our worth to the boys. (Until we got bored of it…) Penny Marshall crafted a solid crowd-pleaser that is every bit enjoyable now as it was in 1993—- comic, dramatic, and above all sincere, this is a film I am perfectly confident in labeling a modern classic.

And the highlight? Madonna, as she is so good at doing, tearing it up on the dancefloor.

Lionel Hampton’s “Flying Home” gets a sexy rendition in a roadhouse. 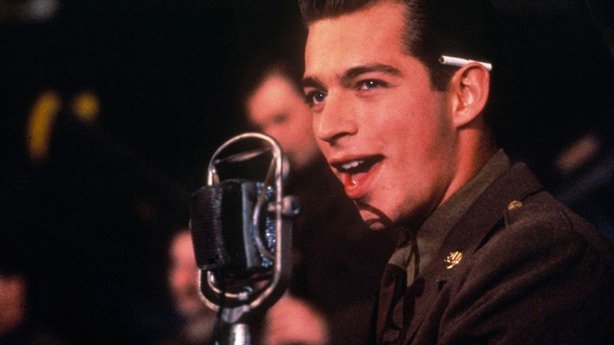 Not necessarily a great movie, but I will say this:  This film got the stamp of approval from the toughest expert around: my late granddad, who flew B52s during the War and told me that the movie mirrored *exactly* real air crew looked, but how the War itself looked from the sky. (To put that in perspective: My granddad threatened three times to walk out of Michael Bay’s Pearl Harbor. Such a cool cat, he was.)

vet enough eye-candy to keep interest. And no, I’m not just talking about Harry Connick Jr., and Billy Zane. (Although they certainly helped!)  The movie capitalizes on a then red-hot Harry Connick Jr.’s winsome crooning– he was fresh of his When Harry Met Sally success, and his revival of big band jazz had been unprecedented in its popularity. (My sister and I had his first album on cassette. The fact we had a crush on him certainly didn’t hurt.) My favorite moment in the film: the boys, facing certain death over a Germany, are able to get a radio signal. Glenn Miller’s melancholy “I Know Why” momentarily dulls the drone of the plane engines. I fell head over heels in love with it.

But. That scene isn’t on YouTube. Instead, here’s the dance scene. Men that are still boys, enjoying one last night of free abandon, with Harry Connick Jr. leading them all in a rousing rendition of “Danny Boy”. 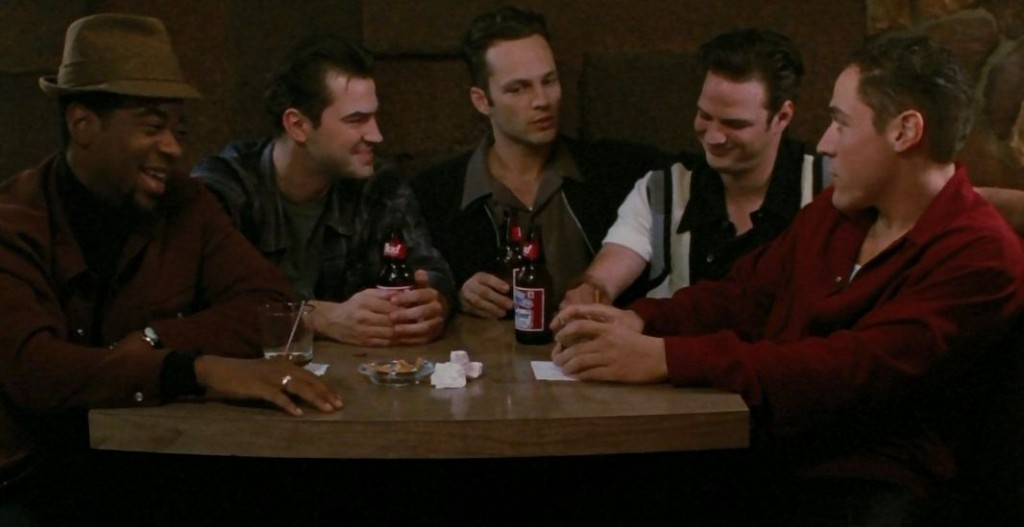 Swingers was, and always will be, SO money.

If you were in high school in 1996, you saw Swingers. And you loved it. This movie is so very much, not only of its time, but of its moment. Nothing was cooler, and I mean nothing, than Jon Favreau and Vince Vaughan. And Heather Graham. And… well … everything. It brought the words “Big Bad Voodoo Daddy” and “Cherry Poppin’ Daddies” into the public vernacular, and swing dancing was suddenly not just something reserved for period films. The hottest cats in Hollywood were doing it. And looking enviably hip in the process.

And why not? Los Angeles, more or less, is responsible for the 90s swing revival, with Royal Crown Revue in the late 80s/early 90s, and the slew of neo-swing artists that followed.

But after this film, well, EVERYONE was doing it.

Even the captain of our basketball team knew the lyrics to the Swingers soundtrack. His favorite? “King of the Road”. (And yes. He was.)