All throughout John Cassavetes’ Gloria, there’s a palpable tension between the man behind the lens and the woman in front of it. Gloria Swenson, played by Cassavetes’ wife, Gena Rowlands, has an on and off love affair with the camera all while dragging a mindless six-year-old boy along for the ride. It’s this admiration for the subject that makes Rowland’s performance stand out; it makes her mere presence in a venerable, yet crumbling city worthy of the camera’s devotion. 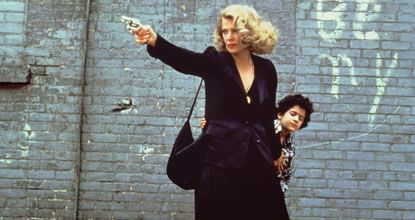 Gloria is the primary focus of every second she’s on screen. Whether it’s a close-up or a wide shot, the audience’s attention immediately pulls to Gloria. It’s not just because her character is the film’s namesake, it’s because she’s why the film was made; her existence is Cassavetes’ allowing a mediator (the camera) to cast the persona of someone he loves up on the screen. And by doing so, he shows the world just how hard-nosed and internally delicate Gloria is. He essentially frames an invisible love letter to Gena.

It’s this attention to Gena’s character, Gloria, that almost makes the audience forget about the nagging six-year-old standing just taller than Gloria’s waist.

That kid is Phil. He’s the six-year-old boy played by John Adames in his only career role—and there’s a reason for that. It’s not that Adames is awful, it’s more that his character is staged to act like a puppet for Cassavetes in a sense that, what the camera can’t vocalize, the young actor can. So, in some situations as the two characters are growing fonder of each other, Adames starts saying things like, “You’re my girlfriend” and “I love you,” etc. While there’s an air of innocence in a child’s voice that allows such phrases not to be taken seriously, they still feel bulky and unnecessary within the story’s plotline—especially when the camera’s already showing its love for Gloria.
Still, the film manages to string together the two characters’ arcs in a compelling tale, all while not allowing the love between director and lead actress to overtake the story’s main points. 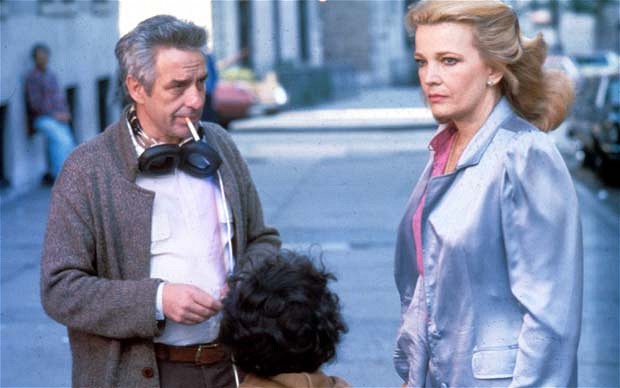 Gloria begins with a mother (Julie Carmen) who hurries home from the grocery store only to start arguing with her husband, Jack (played by Buck Henry) because it turns out he’s been stealing intel from the mob and writing it down in a little black book. Now, the mob wants the book and they’re willing to do anything to get ahold of it, so they kick down the apartment door and shoot up the place. However, moments before they arrive, there’s a knock on their front door, and surprise, it’s Gloria. She wants to ask Jeri (Carmen) for something, but instead Jeri’s telling her to take the kids and get away. But before Jeri can rally up both the kids, her daughter storms into her room and locks the door. Great. Now, Jeri has to deal with drama that she has zero time and patience for.
At this point, Buck’s got his guns out and he’s growing impatient because he knows the hoodlums are almost there. So, in a last stitch effort while his wife is arguing with their daughter, he tells Phil to take the book and go with Gloria. Gloria, who mentions several times that she hates kids—especially his kids—reluctantly takes Phil to her apartment where they hide until the shooting dies down.

Then, they flee. And from here on out, it’s cat and mouse. But damn, Gloria is one tough mouse. Every time the mobsters find her, she pulls a gun on them, and escapes. Every. Single. Time. She even kills to ensure that this kid, whom she barely knows and likes, survives.

It’s this back and forth routine where the audience sees Gloria in a light that only someone as talented in front of, and behind, the camera can capture. Cassavetes intentionally relies on showcasing the grittiness of 1980s New York City. Whether it’s by showing flaky wallpaper, a decrepit building, or even a damaged taxicab, Cassavetes leans on the seedy side of a city, unbeknownst to him, heading toward its most violent decade. It’s these fleeting moments of silent malaise that truly encapsulate the love Cassavetes has for the story’s gritty subject matter: Gloria.
And when he’s not focused on the city, Cassavetes anchors the camera firmly on Gloria. Phil’s presence is always felt, but seemingly just for continuity purposes. The audience knows Phil has the black book; they know his value, but they also know without Gloria, he’s nothing. Gloria’s the one with the gun. She’s the moll. She’s the one who knows what these men will do to get that book.

Overall, Gloria is framed by a resilient heroine who has always been uncertain of her power, but through sudden circumstances beyond her control finds a way to harness the true depths of who she is. It’s this newfound power that allows the film to really show who Gloria is and why the director, John Cassavetes, is in love with her.

If you want to see the film the way Cassavetes intends for audiences to view it, Twilight Time’s Blu-ray release is an excellent place to start. Its crisp rendering of New York City helps viewers see just how broken the underbelly of the city became nearly 40 years ago. Also, there’s a superb essay about the film by Julie Kirgo inside the film’s case, and the Blu-ray itself has the original theatrical trailers. Ultimately, it’s a great investment for a pretty solid film.