Nicholas Ray’s The True Story of Jesse James (1957) is a film about progressive myth-making, the fabrications and recollections that produce a multifaceted yet never fully realized celebrity figure. Here, the legacy of its notorious outlaw protagonist is fostered by animated tales of daring, delinquent exploits and memorial relics like a stack of old, erroneous obituaries, attestingto a life’s worth of presumption and exaggeration (he’s been getting killed for years). As it acknowledges the frequently dubious facts “as any man can testify,” Ray’s picture presents a manifest reputation generated by eager hearsay, emphasizing the social impact James had on a desperate, disenchanted post-war populace, which craved a Robin Hood-esque antihero to right the perceived wrongs of a national transgression. And while contemporary cultural commentary becomes the stuff of printed legend, even James grows cognizant of his significance, observing in the film with keen reflection: “That name means something.”

A remake of the 1939 Henry King film, Jesse James, written by Nunnally Johnson and which appears here in the form of some reused footage, The True Story of Jesse James began as a screenplay by Russell S. Hughes, which Ray rejected, opting for Walter Newman’s rendition(which was then vetoed by 20th Century-Fox in favor of a subsequent version penned by Ray and Gavin Lambert). Whatever the nature of its authorial genesis, though, the picture begins with a botched robbery in Northfield, Minnesota, a calamitous event that proved to be a preliminary nail in the coffin of the James brothers’ increasingly reckless and risky crime spree. Played by Robert Wagner and Jeffrey Hunter, as Jesse and Frank James, respectively, the fugitive siblings are soon pursued by Sheriff Hillstrom (John Doucette) and his zealous posse. The anxious downtime following their escape is punctuated in The True Story of Jesse James by a series of flashbacks, cued by a needlessly whimsical colorful mist, which place Jesse’s life in context, establishing his precarious existence surrounded by the assorted individuals who greet his early undertakings with unfailing loyalty or utter contempt.

Spurred on by the “tragic War Between the States” and the ensuing hostilities that erupted between patchwork militia groups and opposing factions of the United States government, Jesse’s rocky maturation from a rebellious young man to a seasoned professional is seen through the eyes of those who attempt to discern the reasoning for his criminal slant. From Zerelda “Zee” James (Hope Lange), Jesse’s wife and cousin, to Jesse’s mother (Agnes Moorehead) and Rev. Jethro Bailey (John Carradine, who appeared as Bob Ford in the 1939 film), those who lived with or encountered Jesse James make an impassioned case for why he did what he did, assigning a variety of the social or spiritual causes.

In line with several of Ray’s most distinguished features, the flashback sequences of The True Story of Jesse James reveal a troubled individual torn in multiple directions. Having directed Rebel Without A Cause (1955) two years prior, featuring an iconic James Dean (who, had he not been tragically killed, was likely in the running for the role of Jesse—as was Elvis Presley), Ray instills numerous remarks concerning Jesse’s age and his wayward ways (“Does he even shave yet?” … he “seems so lost,” like “a stray”), and enlivens the film with a portrait of young love staking its claim against the judgement of others. 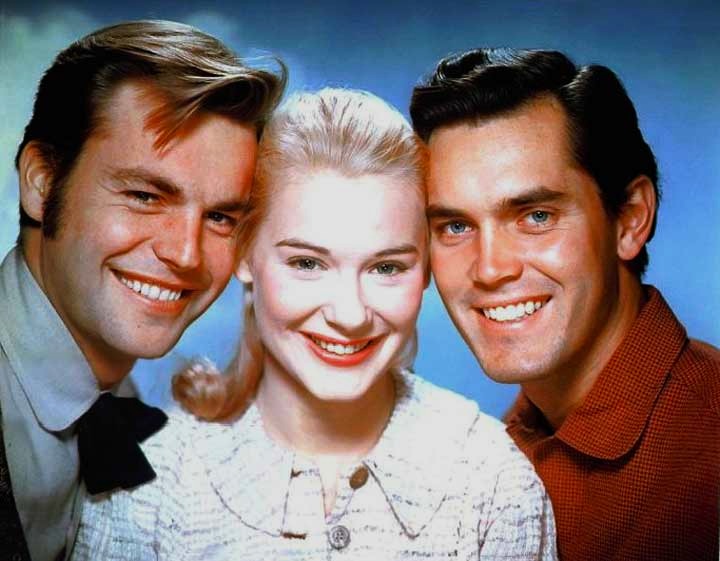 A generally unwitting outcast, Jesse, like Farley Granger and Cathy O’Donnell in Ray’s 1948 debut, They Live By Night, is always teetering on the pole between sin and salvation, guilt and innocence, and like Joan Crawford’s Vienna in Johnny Guitar (1954), he is driven by an overwhelming sense of pride and defiance. Deceptive visions of conventional domesticity, a so-called “normal” life, routinely run counter to the illicit, immediate aims of his detrimental crusade (see James Mason in Ray’s Bigger Than Life [1956]), and as Julie Kirgo notes in her essay for Twilight Time’s Blu-ray release of the film, The True Story of Jesse James is in this way “most interesting as an artifact of the period in which it was made: those pesky 1950s, so serene and straight-laced on the surface, but with so much trouble and discontent rolling in the depths.” Unlike the actors in these corresponding films, Wagner plays the histrionic symbol more suitably than he plays a fully fleshed-out personality, often resorting to overdone dramatics and a strained intonation.

The film is not without its character-driven humor and poignancy, however. There is amusement had by Jesse and Frank as they capitalize on their aliases and unrecognizability to speak openly about their own misdeeds, while Jesse’s observance of his son and daughter playing in their yard—the boy pretending he is Jesse James and “shooting down” the girl—is treated as a sorrowful moment of causal realization. Although Jesse initially chides the monetary preoccupations of others, it also turns out to be part of his own undoing. He becomes a man obsessed, evincing a self-destructive strain evident in much of Ray’s work (to say nothing of his own life). As he does, others are incited by an ever-increasing reward, most infamously Robby Ford (Carl Thayler), who is initially presented as an inconsequential, peripheral figure but is nevertheless weaselly and instantly suspicious, an interpretation no doubt enhanced by the established knowledge of his role in what transpires.

Working with the great cinematographer Joseph MacDonald (who had just shot Bigger Than Life), Ray excels in the management of The True Story of Jesse James’ CinemaScope presentation. The widescreen images of men in confrontational, horizonal holding patterns or grouped dynamically on horseback are emblematic of his compositional skill and choreography. There is throughout the film a vibrant impression of energetic movement, action, formidable staging (particularly in the illustrations of expressive power struggles), and moments of hypnotic pandemonium, like a nighttime raid illuminated by the ominous red-orange flickering of off-screen flames. But if this much was achieved, it was against the odds.

Ray was unable to shoot on location as he wished, there was considerable studio tampering with the final product, and he essentially abandoned the film near the end of its production, making his way to Europe for Bitter Victory (1957). To make matters worse, he believed some of the best scenes he ever directed were in the film but cut out. Despite this, and forgetting the inevitable historical inaccuracies and omissions, there is a fine film to be seen here, with a sufficient psychological bearing and a sporadically impressive style. It’s not a great Western, nor does it compare to Ray’s more illustrious work, but as no less an authority than Jean-Luc Godard argued, “one should not forget the ambition which attended its inception. … One must judge The True Story of Jesse James on its intentions.”

The True Story of Jesse James is available to stream on Hulu and purchase at Shop TCM.