Two scenes tell you all you need to know about The Hot Rock, Peter Yates’ 1972 comedy caper. The first is when Robert Redford’s criminal team leader, John Dortmunder, convenes with explosives expert Allan Greenberg (Paul Sand). They don’t meet in some clandestine hideaway or some smoke-filled café. Instead, they’re situated along the bank of a lazily flowing lake, stools and fishing poles comfortably in place. Almost as an afterthought, they get up, step away from their perch, and Allan begins hurtling explosives of various size and potency into the nearby brush. Dortmunder, after the display of prospective contraptions, says he wants something bigger. And that’s about it. The exhibition is nonchalant and calm, almost incidental, and its casual humor suits perfectly the prevailing tone of the picture. 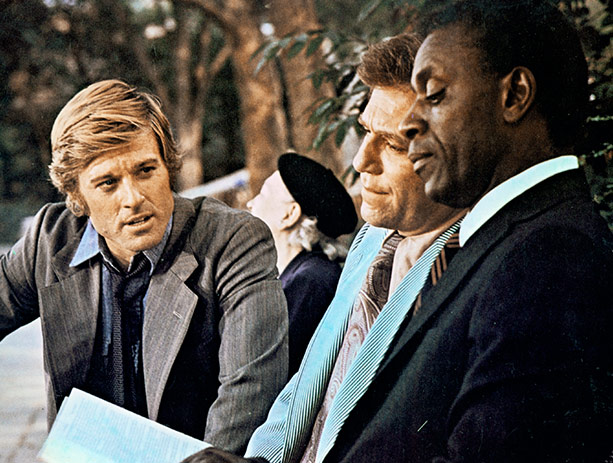 A second scene takes place just before, when mastermind Dr. Amusa (Moses Gunn), who conceives the film’s initiating diamond heist, appears plainly surprised that Dortmunder and his gang, despite all outward appearances of ineptitude, might actually pull the job off. He chuckles to himself, self-satisfied, and wryly observes, “I’m a criminal.” The goals have been clear, and the approach has been nothing if not professional, but such is the lighthearted, seemingly hapless amity of Dortmunder and his band of thieving misfits — locksmith Andy Kelp (George Segal) and driver Stan Murch (Ron Leibman), in addition to Allan and Dortmunder — that Amusa can’t believe they’ve come this far. Truth be told, for all their evident qualification (based on inferred past accomplishment if nothing else), they sometimes seem surprised themselves. For most of The Hot Rock, in the face of every luckless twist and slip-up, we can’t believe it either.

Written by William Goldman, based on novelist Donald E. Westlake’s recurrent Dortmunder character, The Hot Rock hinges on the fate of its central gem, which, when the film begins, is housed in the Brooklyn Museum. There’s a long story behind the priceless diamond, something to do with competing African nations and a repeated theft, and this is where Ambassador Amusa enters the picture. But to secure the gem he needs help, and for that, his first stop is Kelp. And Kelp, in turn, looks to Dortmunder, who also happens to be his brother-in-law. Newly discharged from prison, Dortmunder appears depleted and slipshod, at least to the extent Redford can ever look depleted and slipshod. In and out of the slammer on a regular basis, he has been through it all before and it’s understandable if he’s somewhat skeptical when Kelp comes at him right away with a new caper, picking him up in a stolen car, no less, and nearly running him over in the process. Bemused but thoughtful, clearly seasoned, Dortmunder considers the plan in a fantastically rhythmic passage of Goldman dialogue worth quoting in full: 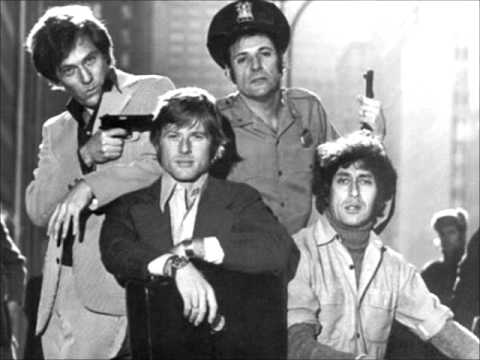 It conveys his deliberation and highlights any number of concerns, establishing the risk and the increasingly likely potential for disaster, and throughout The Hot Rock, but especially in a sequence like this, Redford is, to quote one of his later films, thoroughly natural, spontaneous and easily convincing. His Dortmunder is the relative straight man of the picture, as, for the most part, Sand, Segal, and Leibman play the fools — albeit a trio of amazingly capable fools. As noted by Lem Dobbs in a Twilight Time commentary shared with Julie Kirgo and Nick Redman, this was the last time Redford really had to act; the enduring charisma of Butch Cassidy and the Sundance Kid (1969) had just launched him into the stratosphere of Hollywood stardom, confirming a conspicuous on-screen presence and placing him in an iconic position from which he would seldom descend. Act he does, though, with a delightful throwaway subtlety, balancing practiced determination with slight moments of artless passivity (confounded when his nephew pees on his lap) and character distinction (he’s plagued by an upset stomach, a testament to his wavering nerves of steel, but really just an extraneous, amusing aside).

In his April 18, 1972 review of the film, Roger Ebert noted The Hot Rock is different from most heist movies “because Goldman and Yates lay on the characterization and the locations with a too-generous hand.” “[T]ruly great caper movies,” he says, citing Yates’ own Robbery (1967), “are single-mindedly devoted to their steel-trap plots, and characterization has to tunnel in from underneath, or find a home in the crevices between dialog.”

No doubt, the thrill of many heist film scenarios is the fundamental heist: its conception and execution, the tension, the getaway, the aftermath. But character development, surrounding the heist if not during it (though many times still then) is always essential. Without it, aside from the mechanics of the robbery, who cares? Who does the audience rally behind? And why should they? Characterization is vital to an appreciation of what’s at stake and the capabilities of those involved. This is what The Hot Rock gets right.

So, when Ebert writes, the “idiosyncrasies have been passed out all around,” that criticism points to the one of the picture’s more charming features, from the way Stan and his mother relish in a Stereo recording of the Daytona Speedway, to the way all engage in sociable squabbling and evince an unflappable comedic camaraderie. 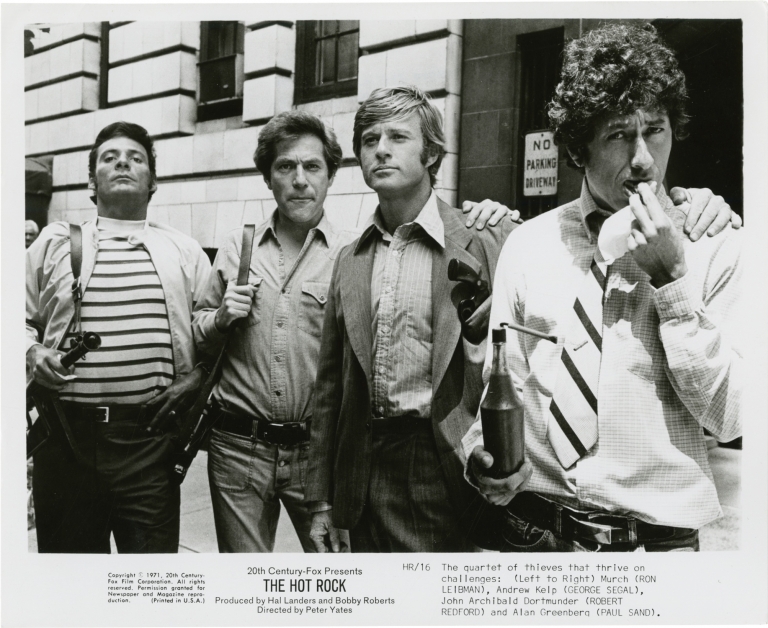 This is a superb cast and an instantly affable crew, largely because of their profusive idiosyncrasies. That a heist occurs (several of them, actually) is almost a by-product. They are, as Kelp states, “men of goodwill,” and as Yates notes, “The point of this film is not that the characters are criminals, but that they are likable, and that they, like many people, plan things all their lives and never have it work out.” We’re with them, in Dobbs’ estimation, in a “Hawksian way,” charmed by how expertly they go through the routine of preliminary surveillance, doubtful that things will proceed as planned, and amazed by just how clever and effective they are even when things doesn’t. Although it is deemed “a dazzling success” in the newspapers, the initial theft, for example, has one major hitch: Greenberg swallows the diamond for safekeeping. When he is arrested, what ensues is one dumbfounding obstacle after another: the diamond is “deposited” elsewhere; the team breaks into a jail and into a police station; there’s a car chase and a helicopter raid; and there’s an absurd dose of hypnotism, cued by the film’s key catchphrase, “Afghanistan banana stand.” A weary, resilient Dortmunder wonders if there’s some sort of occupational conspiracy against him while Amusa, “disenchanted” with the results he sees, remarks, “I’ve heard of the habitual criminal, of course. But I never dreamed I’d become involved with the habitual crime.”

The Hot Rock is cool, jazzy, and light, everything evoked by the film’s Quincy Jones score. There’s a smooth humor to the performances and an unfussy crispness to Yates’ direction. Remarking at the time, “[A]ll around me I was finding that people were making nothing but films about violence, sex and drugs. …. Everything was a downer. I wanted to do an upper,” Yates had Bullitt (1968) in his back pocket and the brilliant The Friends of Eddie Coyle (1973) up next. Goldman, meanwhile, who had won his first screenplay Oscar for Butch Cassidy and the Sundance Kid and would receive his second a few years later, for 1976’s All the President’s Men, shows why he was one of the era’s most coveted writers. The editing by Frank P. Keller and Fred W. Berger is sprightly (they earned the film’s only Academy Award nomination) and Edward R. Brown’s cinematography is impeccable; shooting on-location in New York City, The Hot Rock showcases beautiful aerial footage of Manhattan, especially an unexpectedly emotional view of the World Trade Center with its south tower under construction.

Featured along with an isolated music track and the film’s original theatrical trailer, the Twilight Time commentary with Dobbs, Kirgo, and Redman touts the traits and talents of its eclectic cast, Goldman, and Yates, but Kirgo puts it best in her liner note essay: The Hot Rock, she writes, is a “shockingly undervalued, under-seen little gem with a phenomenal pedigree in virtually every department.” Never showy and never overwrought (mostly because the repercussions seldom seem dire or at least permanent), the film is as effortlessly satisfying as Redford’s final, jaunty stroll down the sidewalk — a success all around.

No one can fight like him. No one can dance like him. And no one has ever been able to sing like him. We’re talking about THE “KING OF ROCK & ROLL,” Elvis Presley, of […]