As stated in a post-credit scrawl, George Harvey Bone is a distinguished London composer. And as will soon be seen, he is well-respected and charming, with devoted friends and a burgeoning artistic career. However, in John Brahm’s 1945 Fox drama, Hangover Square, the initial twist to the establishment of Bone’s character comes before these more laudable details of his life are ever confirmed. Before anything, Bone is shown stabbing a lowly antique dealer to death, then setting fire to the slain man’s Fulham home. 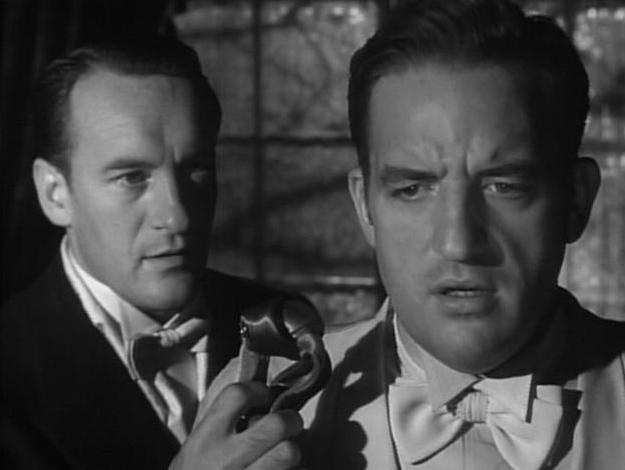 So, why then is Bone such a persuasive protagonist? Why, in the very next scene, does he illicit instant sympathy? Because, as played by lumbering Laird Cregar, Bone is subsequently shown shambling his way home, an unkempt mess, a dazed, pathetic, and remarkably sorrowful figure. He is a befuddled contrast to what his avowed talent and social reputation would suggest, and that there is something drastically amiss becomes evident when Barbara Chapman (Faye Marlowe), Bone’s apparent girlfriend, recognizes his faded state and ominously laments, “It’s happened again.” Bone has no recollection of what he has done, or if he even did it. Though he is eventually exonerated of the opening murder, he is still in possession of the lethal dagger and recalls nothing of nearly an entire day. His virtue is quite less than certain. Ensuing actions only make it worse.

As immediately endearing as Cregar’s hapless musician is, George Sanders’ Dr. Allan Middleton is directly suspicious. Employed at Scotland Yard, Middleton offers to delve into the psychological depths of Bone’s disorder, but he is also skeptical of his friend’s innocence. So definite is Bone’s affability, though, affirmed by Cregar’s sensitive performance, that even if Middleton weren’t necessarily out to get his supposed ally, his incredulity alone is grounds for viewer distrust. “You’re out of balance,” observes Middleton, who advises Bone to stay away from music for a while, to give his mind a rest. But that’s easier said than done. Bone’s professional aspiration is central to Hangover Square, and that his musical distinction is on the ascent only serves to strengthen spectator support. 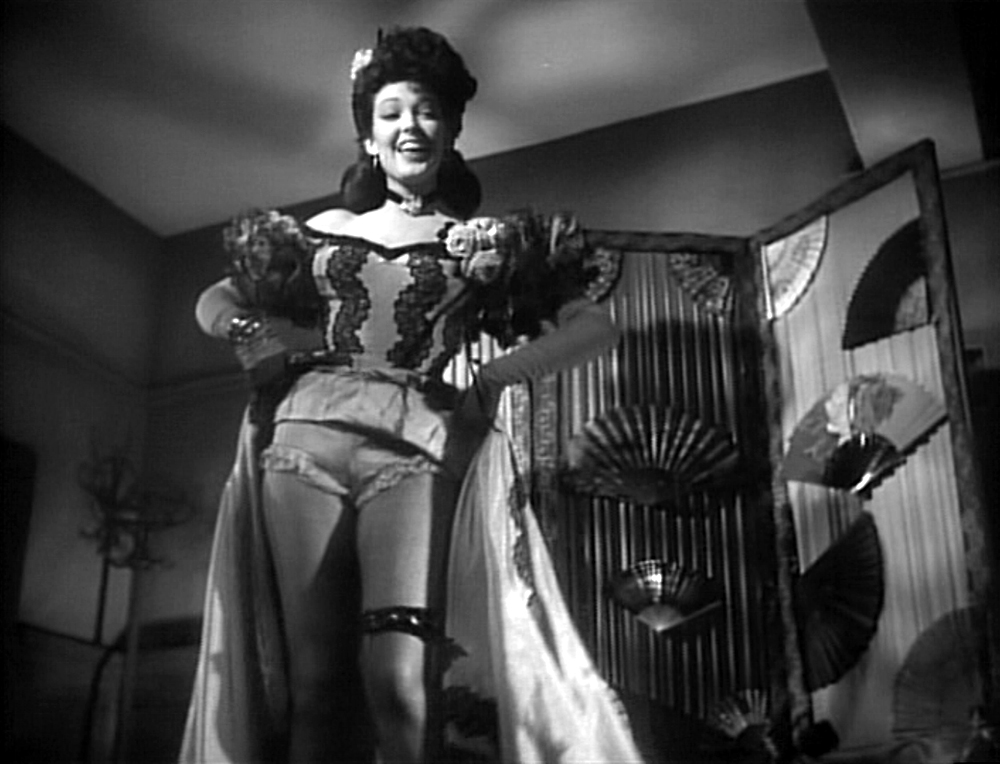 In any case, Middleton doesn’t prove as essential as he appears (were he not Sanders, he would be easily forgotten), and soon supplanted in his place, as Bone’s prospective foil, is conniving dance hall singer Netta Longdon (Linda Darnell). Bone swiftly and strangely falls head over heels for this clearly dubious siren, and his eventual desire to marry her seems wholly unreasonable—chalk it up to his confused condition. All the same, it sets up an effectively tense contention, and their relationship advances the film’s tendency toward character ambiguity, as Bone’s occupational objective is reflected in Netta’s own ambition. Sure, she is exploiting him at every turn, and she does so solely with her floundering career in mind, but, truth be told, she is an opportunist no different than he. Cast after original choice Marlene Dietrich rejected the part (the goal, presumably, was to bank on Dietrich’s genuine cabaret origins), and after Geraldine Fitzgerald also declined, Darnell imbues in Netta a knowing boldness, a sexual allure, and the sense of total control, all traits that juxtapose appreciably with Cregar’s ill-fated, schizophrenic Bone.

Written by Barré Lyndon, based on Patrick Hamilton’s 1941 novel, Hangover Square has noirish affinities beyond this wily femme fatale. In large part compounded by his mental breakdown, Bone exists in a world that routinely conspires against him (so it seems, anyway), a condensed world with a robust nightlife, with beer halls and shady streets populated by equally shifty characters. Director Brahm, best known for his 1944 remake of Alfred Hitchcock’s Jack the Ripper riff, The Lodger, delivers a comparable degree of Edwardian detail, usually realized through background adornment and local, vocal flavor, and just a year removed from his Oscar-winning cinematography on Laura (1944), Joseph LaShelle adds brilliant contrast to the immersive imagery. The black and white extremes look exceptional on the Kino Lorber Blu-ray of Hangover Square, as does the perpetual dampness of the London streets and the pointed use of source illumination: lanterns, candles, and apertures of light emitting from ubiquitous apartment windows. With music by Bernard Herrmann, after his own Oscar-winning work on The Devil and Daniel Webster (1941), the anxious audio-visual atmosphere of Hangover Square reaches a dazzling double crest, starting with the ceremonial burning of Guy Fawkes effigies, a bonfire that assists in the twisted, albeit creative, disposal of one body, and concluding in a similarly fiery “Concerto Macabre,” which tragically liberates another character in a delirious, prolonged, and ecstatic final sequence. 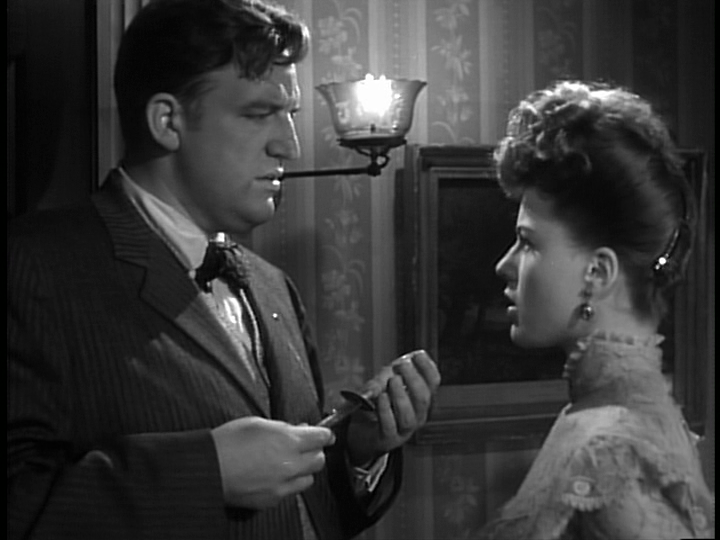 As recounted in “The Tragic Mask: The Laird Cregar Story,” one of several supplements included on the Kino Lorber disc (alongside two commentaries and a radio show presentation performed by Vincent Price), Hangover Square’s most significant impression is made by the staggering disheveled purity of its undervalued star. It was Cregar who brought Hamilton’s novel to the attention of 20th Century Fox to begin with, and all involved were eager to recreate the success of Brahm’s The Lodger, which was also written by Lyndon and starred Cregar and Sanders, but changes to the story soured Cregar’s enthusiasm and he initially refused to perform (facing suspension). He didn’t like the change in setting, from 1939 London to a turn-of-the-century period piece like The Lodger, and as Cregar was a real-life musician, he was keen to perform the music in the picture, a notion nixed by Brahm. Most importantly, Cregar longed to move beyond his typecast roles as the villainous heavy (literally so, as he was over six feet tall and pushed past 300 pounds). Hoping to subvert the connotations of his imposing presence, he banked on the romantic potential of Bone’s relationship with Barbara, played by teenage Faye Marlowe, who does indeed buoy the depiction of Bone as a benevolent, luckless individual. Sadly, the 31-year-old Cregar sought to further diminish his menacing stature by applying a crash diet augmented by amphetamines, a process that, while effective, also resulted in a fatal heart attack just months after the film premiered, leaving him a mere four years of credited work. Knowing this, Hangover Square’s theme of physical and mental deterioration is a consequently potent and eerily prescient precursor to what actually beset its commendable star. 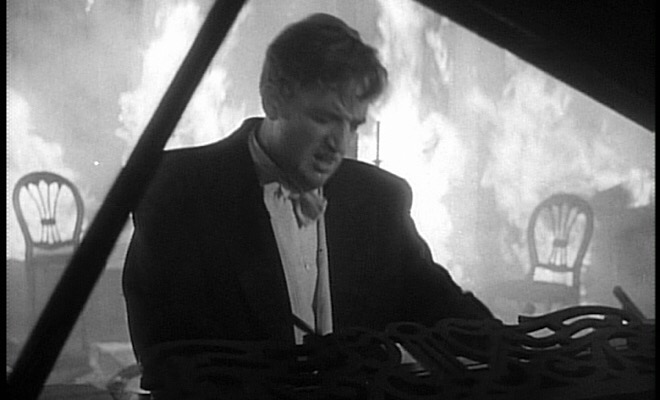 Obviously, Cregar didn’t suffer the torment that plagues Bone, but it’s hard not to interpret a supplementary extension to his anguish and vulnerability. Cregar’s phenomenal embodiment of this “sympathetic psychopath,” as Richard Schickel puts it, leaves one only to speculate on what else could have been accomplished.

The Jungle Book Diamond Edition: More Than the “Bare Necessities”

Beginning in the 1950s, the Disney animation studio began a series of adaptations of popular British literature classics, which has colloquially become known as the “English Cycle” of Disney features. 1951 brought Walt’s long-planned version […]