“52 Pick-Up,” the 1974 Elmore Leonard novel on which The Ambassador is very loosely based, takes place in a generally nondescript Detroit, a site that is, in and of itself, inconsequential to the plot. Conversely, as one of the many amendments made to the Leonard text, the prominent setting of this 1984 film is one rife with overt, inherent significance and complementary contention. With a screenplay credited to Max Jack, The Ambassador relocates its drama to the Middle East, a region, as noted in an exceptionally long opening scrawl, that is a “melting pot” and “powder keg.” On a rudimentary level, the combative arena pits Israel on one side and Palestine on the other, with assorted ambivalent factions hovering in a precarious in-between zone. Aside from subsequently supporting multiple religious and political associations, to augment the fabricated drama of the film, the location was also one of personal importance to Israeli-born cousins Menahem Golan and Yoram Globus, producers of the picture and the madcap masterminds behind the sensational resurgence of Cannon Films in the late 1970s and into the 1980s. 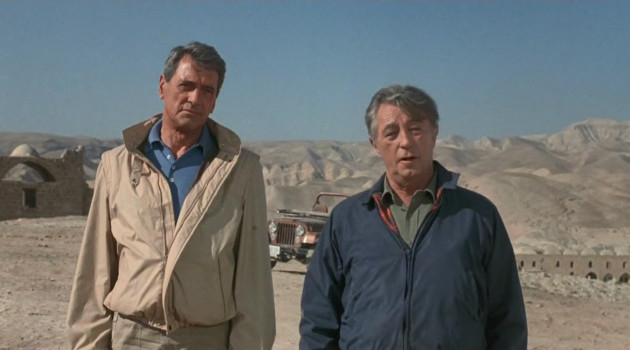 As specific as its setting was for Golan and Globus (who would, incidentally, produce a Leonard-scripted, John Frankenheimer-directed adaptation of the same story two years later, retaining the book’s title but this time set in Los Angeles), The Ambassador also suits well the formal sensibilities of J. Lee Thompson. Director of eight films with Cannon, Thompson routinely displayed a practiced knack for dynamic action, a violent momentum seen to instantly great effect when The Ambassador begins with hostile helicopters descending on a desert rendezvous, with machine gun fire, rocket launchers, and a dusty, dizzying pursuit. Who is fighting who in this introductory melee isn’t so clear, for the viewer or for Peter Hacker (Robert Mitchum), the American ambassador to Israel. Though accomplished and well-respected, Peter appears perpetually in over his head, at this introductory point in the story and throughout the film to come. He is surprisingly naïve when it comes to the ongoing fracas and the vagaries of this persisting holy war and so heedless, if earnest, is his brand of diplomacy, that Israeli Defense Minsiter Eretz (Donald Pleasance), a friend, nevertheless deems him a “radical.” Eretz makes a poignant case for his skepticism when he notes a reluctance to discuss with the enemy any sort of “solution,” a discerning declaration made in a Holocaust museum.

Providing Peter with support and assurance is his security officer Frank Stevenson (Rock Hudson), who does his level best to keep his boss in the know and, more importantly, alive. Adding to Peter’s concerns, however, is the fact his neglected wife, Alex (Ellen Burstyn), has been having an affair with Mustapha Hashimi (Fabio Testi), ostensibly an antique dealer but also a covert member of the Palestinian Liberation Organization. Peter takes the infidelity rather well, all things considered, and shrugs off a $1 million blackmail scheme soon delivered his way, threatening the release of illicit footage featuring Alex and Mustapha during one of their trysts. Frank, too, fails to see the unfaithful fuss: “What’s the punchline?” he asks when told of the predicament and the demand. Whether they are morally jaded or simply see the affair as trivial in the context of the surrounding unrest, there is now at stake, in any case, the partisan upheaval, the durability of Peter’s career, and the state of his floundering marriage. 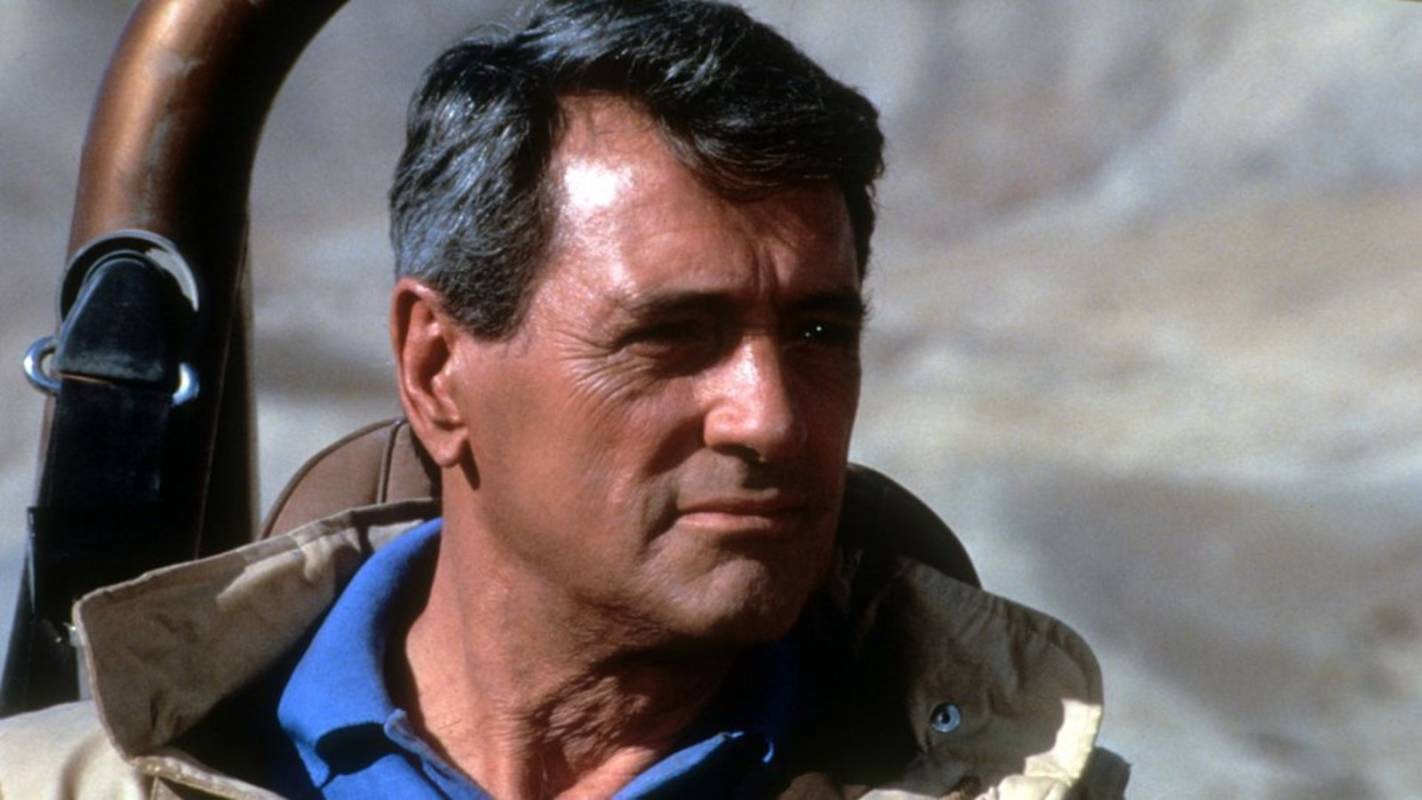 It’s a meandering narrative, with a web of connected and detached conspirators playing their respective part in the arrangement, whatever arrangement that may be, but what holds The Ambassador together so well, irrespective of the plot in many ways, is the ensemble of actors assembled for the film. Mitchum, classically cool and casual, had worked with Thompson before on the intense 1962 version of Cape Fear and he was quick to take the part of Israel-loving Peter after some of his sarcastic jokes were perceived as anti-Semitic. He is, accordingly, at pains to demonstrate moments of dedicated passion, solemnly pleading for peace in the Middle East. Mitchum is at his iconic, sardonic best, however, when downplaying the encircling chaos, nonplussed in the face of most any situation.

Hudson, replacing an over-scheduled Telly Savalas, was enduring his not-yet-public battle with AIDS and would pass away the following year. While his facial features are noticeably faded, especially compared to the popular romantic image of his robust physique in years past, his engagement with this hearty role is energetic, eager, and often conveys a lingering trace of uncertainty concerning Frank’s true intentions. Alex, a pivotal character early on, is basically the third wheel of The Ambassador’s fundamental focus, yet Burstyn refuses to relinquish her position easily. Her performance is savvy, pragmatic, and emphatically, somewhat shockingly, erotic. In a word, as agreed upon by historians Howard S. Berger and Nathaniel Thompson, who contribute a commentary track for the Kino Lober Blu-ray of the film alongside editor Mark Goldblatt, Burstyn, Hudson, and Mitchum are a demonstrably “consummate” group of performers. Indeed, The Ambassador is worth watching just to watch them. 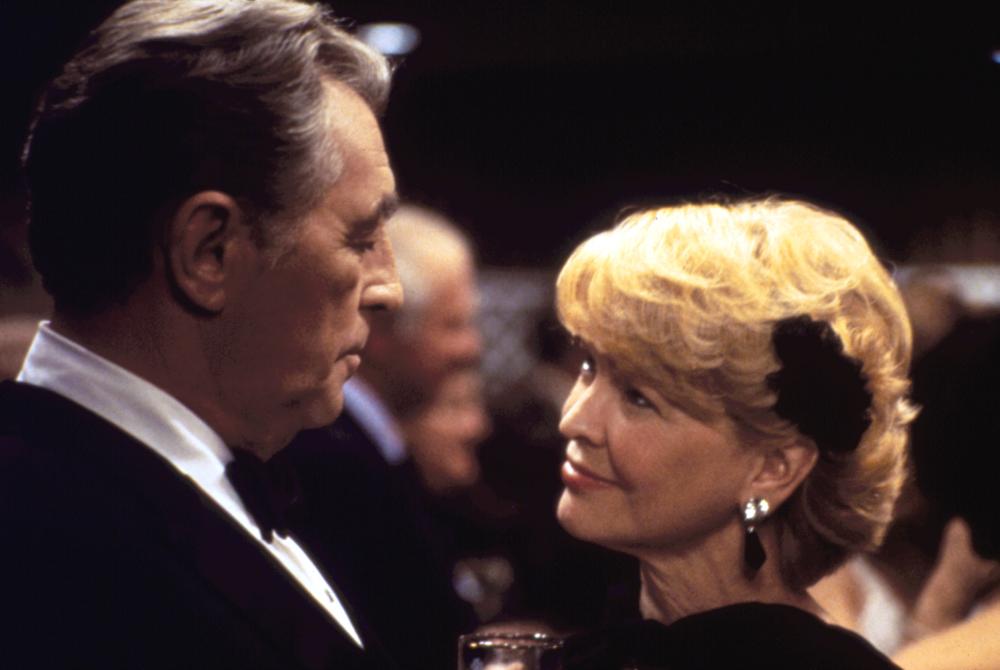 The trio of Berger, Thompson, and Goldblatt also heap due praise on Thompson, noting his “adventurous” spirit and his reputation as a gifted “craftsman.” As confirmed in 1961’s The Guns of Navarone, for which he received an Oscar nomination, or in any one of his collaborations with Charles Bronson, Thompson could be a lively, stylish, and fierce filmmaker, here working with cinematographer Adam Greenberg, who was similarly adept at action and later received his own Oscar nomination, for 1991’s Terminator 2: Judgment Day (he also manned the camera on the first Terminator film, released the same year as The Ambassador). Thompson has a particularly nice way of mounting the restless developments that sporadically surface in The Ambassador, managing an imminent danger with scenes of voyeuristic stalking and spying, prying eyes obscured by darkened sunglasses, hidden cameras snapping away, and concealed guns ominously at the ready. Rare for Thompson, though, and rare for Golan and Globus (even if it no doubt stems from their cultural connection to the material), is some of The Ambassador’s blatantly optimistic commentary, cumbersomely fitted within the traditional genre friction. Although they effectively get it both ways when Peter musters a group of Palestinians and Jews in the isolated dark of night, for a meeting of the minds that devolves, not surprisingly, into a frantic, graphic bloodbath, less successful is the conclusion of the picture, when idealistic youth gather for a candlelight testament to Peter’s efforts. It’s a nice sentiment, to be sure, but it fails to mollify the film’s otherwise cynical tone or the realities of its underlying global premise.

The Ambassador wouldn’t be the only film Golan and Globus positioned against this strained Mideast backdrop (their 1986 bonanza The Delta Force is likely the most impetuous and entertaining example), but it does suggest a genuine degree of invested interest on their behalf. For as much as it needs to be, the picture is attuned to the volatile region’s varied conflicts, which adds considerably to its immediate tension and extends it beyond the initial Leonard framework.

The Stuff That Dreams Are Made Of: OUT OF THE PAST on Blu-Ray

By DREW MORTON Five years ago, I wrote a retrospective on film noir for Pajiba by honing down my favorite film genre (or movement or mode – depending on who you’re talking to) to the Top Five […]