Many of us know the story: Leslie Howard negotiated with David O. Selznick for co-producer credits on the 1939 film Intermezzo: A Love Story (Ingrid Bergman’s Hollywood debut and remake of the 1936 Swedish film Intermezzo, also starring Bergman). In exchange, Howard begrudgingly agreed to play the role of Scarlett O’Hara’s unrequited love interest, the handsome, emotionally weak Ashley Wilkes in Gone With the Wind (1939). Howard despised the role, thinking it ridiculous that at 46 he was playing the young, impossibly handsome twenty-something southern gentleman. He also made little effort to conceal his disdain for the role during the filming of the sweeping epic, once commenting, “I hate the damn part. I’m not nearly beautiful or young enough for Ashley, and it makes me sick being fixed up to look attractive.” Well, ok then.

Here’s the thing: Leslie Howard is at his very best when allowed to play thoroughly English roles. That may be typecasting, but Howard’s demeanor, slender looks and delectable speaking voice is a perfect match to play the part of the quintessential upper-class English gentleman. Howard knew this to be his strong suit, and he regularly pursued these types of roles. His brilliant turn as the foppish Sir Percy Blakeney and secret alter-ego, the indefatigable Scarlet Pimpernel, is one of Howard’s greatest performances.

Set at the beginning of the French Revolution, The Scarlet Pimpernel (1934) follows the mysterious heroics of Englishman Sir Percy Blakeney, a savior to the persecuted aristocrats facing imprisonment and barbaric execution in France. With Sir Blakeney’s dual identity as the Scarlet Pimpernel only known to his small, dedicated group of men (akin to that of Robin Hood), he manages to slip right under the noses of French Republic soldiers and officials, a persistent annoyance to Chauvelin (Raymond Massey), the newly appointed French ambassador to England. The Scarlet Pimpernel is masterful in these daring missions, employing any number of elaborate disguises (dressing as an old hag with impressive facial prosthetics, for example). His enemies are unaware they’ve been duped until they discover his calling card: a simple, yet elegant drawing of a pimpernel flower. By the time this playful, mocking note is discovered, the mysterious hero has vanished. Blakeney’s choice of emblem for his alter-ego is quite clever; the pimpernel being the flower of a common weed blending in with surrounding nature.

To further throw French authorities off his trail (and the Pimpernel’s adoring, inquiring fans), Blakeney masquerades as an insufferably shallow, dim-witted, fashion-obsessed character who playfully chastises his friends and acquaintances over their ill-fitting clothes (like the rotund Prince of Wales, played by brilliant character actor Nigel Bruce) or poorly tied cravats. In one moment of humorous arrogance he quips, “A man who can’t tie his own cravat isn’t likely to put a noose around the Pimpernel’s neck.” Blakeney’s extravagant personality is even played out in the presence of his unsuspecting wife, Marguerite (Merle Oberon), who is frustrated by her husband’s frivolities and airheaded observations.

Percy and Marguerite’s relationship is strained with the implication they are no longer sexually intimate. Marguerite makes it known to Percy that she finds the Scarlet Pimpernel intriguing, and is unable to hide her attraction to the mysterious figure. Of course Percy is secretly aroused by this revelation, and he has a bit of fun with Marguerite: “It’s a dangerous game, my dear. Falling in love with a phantom. For all you know, he might be a married man who is deeply in love with his wife.” Percy’s knowledge of Marguerite’s love of his alter-ego is the validation needed for a perilous mission to France to save her brother. It’s also incredibly sexy.

Leslie Howard’s dual portrayal of Sir Blakeney/Scarlet Pimpernel is fun and quite humorous at times. The foolish Percy speaks with an exaggerated, over-enunciated flourish that enhances his catty observations, dimwitted responses and self-amusing forays into topical poetry, the subject matter on none other than the Pimpernel, of course. He’s also a master of the one-liner. Frustrated with her husband, Marguerite snaps “Can’t you rise above trivialities for once?” Without skipping a beat, Percy replies,”Can’t rise above anything more than three syllables, my dear…never could.” Blakeney’s attempts to conceal his identity, even at the risk of sacrificing his relationship with his wife, are admirable and quite entertaining. Given a role with actual substance to it, unlike that of Ashley “Milquetoast” Wilkes, Leslie Howard exhibits his true talent.

Over the next few weeks I’ll be covering other films starring Leslie Howard, currently streaming in the FilmStruck catalog. My hope is to build the case that he is one of the most misunderstood and under-appreciated actors of his generation.

This piece was originally published at StreamLine, the official blog of FilmStruck on November 19, 2016 and can be found archived here. 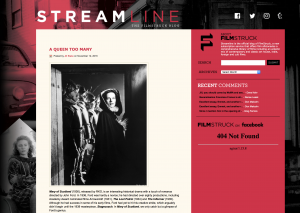