Aside from George Cukor’s visually stunning musical masterpiece My Fair Lady (1964), Pygmalion (1938), directed by Anthony Asquith (with Leslie Howard receiving co-director credits), is the only other significant film adaptation of George Bernard Shaw’s 1913 stage play of the same name. Of the two films, Pygmalion is the more faithful adaptation and arguably the better movie. Although it lacks the splashy technicolor, catchy Lerner and Loewe musical numbers and intricate Cecil Beaton designed costumes featured in My Fair Lady (and those incredible hats!), Pygmalion tosses aside the showiness (although Schiarpelli fashions are nothing to sneeze at) for a more genuine and authentically English production. Its stripped down approach accentuates the stark contrast between the ill-mannered, uneducated, poorly dressed flower girl, and the simple, well-spoken, dignified elegance of a duchess. The success of this adaptation is likely due to Shaw himself. Producer Gabriel Pascal obtained filming rights from Shaw directly, who was originally hesitant to make the deal. The playwright was involved in the production, lending his talents to the adapted screenplay, which won him the Academy Award in 1939. Despite his involvement with the film, Shaw was greatly disappointed with the tacked-on happy ending. Shaw was aware that his original ending wouldn’t be in the film, so he negotiated a reasonable compromise with Pascal. Unbeknownst to Shaw, Pascal had filmed an ending which was different from what was agreed upon. When he discovered Pascal’s changes, the notoriously difficult Shaw was quite mad, and rightly so. Maintaining his integrity as a well-respected playwright was paramount, and altering the outcome of two of his most famous characters jeopardized that, or so he thought. Moviegoers in the 1930s wanted to see even the most flawed of characters find some sort of happiness, especially in their romantic lives.

Speaking of flawed characters, Professor Henry Higgins (Leslie Howard) is a jerk. His insufferable arrogance and piety, ridiculous expectations and obnoxiously tedious research into the science of phonetics is, at times, hard to stomach. His cruel condescension hurled toward his “student” Eliza Doolittle (Wendy Hiller) borders on the abusive, especially when he places a bet on her potential success like she is a horse at the track. Professor Higgins’ stuffiness and peculiarities are unattractive, and are likely the primary reason he has yet to marry. Higgins acts completely disinterested in women, or in maintaining any sort of significant relationship with anyone aside from his mother and his colleague Colonel Pickering. The self-described “confirmed old bachelor” could care less about fostering any sort of romantic relationship with anyone. Professor Higgins’ cold attitude toward women could be interpreted as an indication of his sexual preferences, but it’s more complex that that. His narcissism fuels his attraction; in other words, anything related to his work, his creations, so to speak, are what he desires. With his most challenging student yet, the cockney flower girl and “gutternsipe” Eliza Doolittle, Henry Higgins is not only confronted with the difficulties in turning her into a respectable woman of class, but discovers that he just might have feelings for someone other than himself.

The acerbic nature of Professor Higgins’ behavior makes it difficult to find any sort of redeeming qualities in his personality. When Eliza begins to reclaim her independence and uses her beautifully spoken English to put Higgins in his rightful place, her actions are completely justifiable. And yet, there’s somehow a glimmer of goodness in Higgins peeking through his cantankerous exterior; we finally begin to understand his peculiar methods of expressing affection. Leslie Howard so perfectly embodies the personality of the exacting professor, seamlessly transitioning from the braggart taking notes outside the theatre in Covent Garden; to the boyish amusement and comedic timing of coaching Eliza at her first afternoon tea amongst high society types (“Stick to the weather and your health,” he advises); to his self-amusing, yet cruel comments on Eliza’s lack of etiquette and personal hygiene (“She’s so deliciously low, so horribly dirty.”); to the realization of his deep affection for Eliza in spite of himself. When Higgins is in the rigid environment of his home and able to fully immerse himself in his work, he is in complete control. He dictates what is proper speech, proper behavior, proper dress. He constantly strives for perfection and rarely falters from it, until he is in the presence of his mother. In this environment Henry relaxes a bit, allowing for some of his own imperfections to surface. Mrs. Higgins scolds her son for nervously placing his hands in his pockets, pacing around the room and sitting on the side of a table. Leslie Howard perfectly distinguishes the two sides of Higgins’ personality, and it’s the actor’s endearing charm, wit, comedic timing and sophistication that humanizes the otherwise unlikable professor. Wendy Hiller is magnificent as Eliza and an ideal match for Howard’s clever, quick delivery. Every moment between them is an absolute joy to watch, with the tea party scene being one of the funniest moments in film.

The character-driven Pygmalion feels very much like a stage production with its deliberate blocking, verbose dialogue, detailed sets and lightning-fast pacing. Aside from a cleverly edited and beautifully artistic montage of Henry teaching Eliza how to speak proper Queen’s English (directed by a young David Lean), Pygmalion’s style lays the foundation for the teleplay. This filming style coupled with an abridged adapted screenplay would become popular during the rise of television in the 1950s and 1960s, and later with popular series such as Masterpiece Theatre. This approach to Shaw’s play is a refreshing take, and the ideal vehicle to showcase the vast abilities of two immensely talented actors.

Over the next few weeks I’ll be covering other films starring Leslie Howard, currently streaming in the FilmStruck catalog. You can find my post on Howard’s performance in The Scarlet Pimpernel here. My hope is to build the case that he is one of the most misunderstood and under-appreciated actors of his generation.

This piece was originally published at StreamLine, the official blog of FilmStruck on November 26, 2016 and can be found archived here. 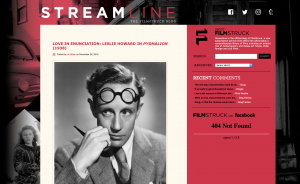