With World War II ramping up in his native Britain, Leslie Howard felt compelled to redirect the focus of his film career to the war effort. He also wanted to expand into producer and directorial roles, spending less time in front of the camera. Unfortunately there wasn’t a clear path for him to do so in Hollywood, further adding to his desire to return home to Britain. After a successful string of starring roles in American films such as Of Human Bondage (1934), Romeo and Juliet (1936), Intermezzo: A Love Story (1939) and of course Gone with the Wind (1939), Leslie Howard bid adieu to Hollywood (and apparently quite a bit of money). Once returned home, Howard didn’t waste much time, immediately beginning production on two important propaganda films: Pimpernel Smith (1941), a modern take of the literary masterpiece The Scarlet Pimpernel (in which Howard starred in an adaptation in 1934) and Michael Powell and Emeric Pressburger’s 49th Parallel (1941). Both of these films were instrumental in building morale for British citizens and encouraging support from the United States, which remained neutral at that time. Following the success of Pimpernel Smith and 49th Parallel, Howard continued his contribution to the war effort with the 1942 film The First of the Few (released under the title Spitfire in the United States), a biopic on the aircraft developer R.J. Mitchell, whose accomplishments included the Supermarine Spitfire, an important component of the Royal Air Force’s fleet.

Produced, directed by and starring Howard, Spitfire (now streaming on The Criterion Channel of FilmStruck) chronicles R.J. Mitchell’s important work as an aeronautical engineer and the obstacles encountered in his quest to perfect an aircraft fit to withstand the various hardships of battle. Howard bore no resemblance to Mitchell in physical appearance or demeanor (often considered a reasonable compromise in many biopics), but that inaccuracy can be overlooked because of the film’s intent. Howard’s nuanced portrayal of the man behind the Spitfire is steeped in respect and admiration, making it abundantly clear that Britain owes a great debt to Mitchell’s personal sacrifice and dedication to his life’s work. Supporting Howard is the equally brilliant David Niven as Geoffrey Crisp, who serves both as storyteller and occasional comic relief in the form of an arrogant, yet lovable, ladies’ man (one of Niven’s many talents). His character is a composite of the real test pilots who helped Mitchell during the Spitfire’s development. One of those pilots, Jeffrey Quill, flew a Spitfire mock-up for a key flight scene. There are also several real-life RAF pilots in uncredited roles, providing further authenticity to the film.

Leslie Howard spent a great deal of time researching the life and work of R.J. Mitchell for Spitfire, making sure to properly honor the late engineer’s significant achievements in the modernization of military aircraft. While certain parts of Mitchell’s life are exaggerated for the sake of the story, Howard’s goal was not only to demonstrate the importance of the Spitfire to the RAF, but reveal the military’s dependence on the aircraft to guarantee victory in its fight against Germany. Spitfire also provided a great way for Britain to boost her confidence and prove to Germany (and the rest of the world) that the RAF was more than equipped to fight them in the air. Filled with genuine homegrown patriotism, Spitfire highlights the importance of British-designed and manufactured military equipment, encouraging civilians, plant workers, engineers and others to continue their support of the British Armed Forces.

Howard’s dedication to the war effort not only had a significant impact on his career but was quite possibly a major factor in his untimely death. On June 1, 1943, a civilian plane carrying Howard and sixteen others (including passengers and crew) en route from Lisbon to London, was shot down by the Luftwaffe over the Bay of Biscay. No one on board the flight survived and the circumstances of the crash have long been a mystery. Howard had traveled to Portugal and Spain to lecture about acting and films, and was present for screenings of Pimpernel Smith and Spitfire, which had been released in Britain in the fall of 1942 (and wouldn’t be released in the United States until mid-June 1943). He also met with members of the international press and various foreign dignitaries while touring both countries. His pro-Britain propaganda work hadn’t gone unnoticed and he definitely couldn’t count Germany amongst his many fans. There are several theories as to the reason why Howard’s plane was shot down. Was his manager and traveling companion Alfred Chenhalls mistaken for British Prime Minister Winston Churchill? Was Howard being specifically targeted for assassination in retribution for his firm, outspoken anti-Nazi stance? Did Howard just happen to be in the wrong place at the wrong time, or are the conspiracy theories right about him being on a top-secret spy mission for the British government? Although the real reason behind the attack still remains a mystery, Howard’s children and other historians (such as Ian Colvin, author of the excellent, must-read book Flight 777: The Mystery of Leslie Howard) have gathered substantial evidence to suggest that he was most likely the victim of a calculated assassination in an effort to severely damage British morale.

At the time of his death, Leslie Howard was 50 years old and had made less than thirty films, with Spitfire being his last feature. It’s hard to say what Howard would’ve done had he lived, but it’s probably safe to assume that he was just getting started. Perhaps we would’ve seen him direct and star in an adaptation of Shakespeare’s Hamlet, or finally bring his passion project on T.E. Lawrence to the screen, or at the very least been involved in the development of David Lean’s epic nineteen years later? Who knows. Despite being undervalued as an actor, director and producer, and frequently miscast in many Hollywood films, Howard managed to mark each of his performances with an understated, unique brilliance. When Hollywood couldn’t figure out what to do with him, Howard turned his untapped talent and passion for filmmaking toward a most noble cause. In sacrificing his comfortable Hollywood career to support his country, Leslie Howard found his artistic freedom. It’s a shame we never saw him reach his full potential. Thankfully we have a handful of exceptional performances that provide us with a glimpse of his immense talents.

Over the past few weeks I’ve written about several films starring Leslie Howard that are currently streaming on FilmStruck and The Criterion Channel. Make sure to read my posts on Howard’s performances in The Scarlet Pimpernel (1934), Pygmalion (1938)and49th Parallel (1941). I hope you take the time to check out Howard’s exceptional performances in these films. 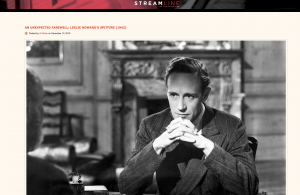