There are countless film and television adaptations of Charles Dickens’s novella A Christmas Carol, a mainstay each holiday season. The most popular of these adaptations include the 1938 version starring Reginald Owen and Gene Lockhart; the 1951 film starring Alastair Sim; the animated classic Mister Magoo’s Christmas Carol (1962); the musical Scrooge (1979) starring Albert Finney; the modern-day comedy Scrooged (1988) with Bill Murray and Karen Allen; and The Muppet Christmas Carol (1992) with Michael Caine and the Muppet cast. Dickens’s story of regret, loneliness, reflection and redemption has been portrayed in various settings, from the classic Victorian era and more contemporary, to alternate realities and dystopian worlds. With each retelling the story continues to influence and inspire, remaining just as relevant as it was over 170 years ago. In 1964, writer and producer Rod Serling created a rather unique spin on this well known, beloved tale with the telefilm A Carol For Another Christmas, available on FilmStruck as part of the “Made for the U.N.” programming block. Directed by Joseph L. Mankiewicz (his first foray into television), and featuring an incredible cast, including Sterling Hayden, Ben Gazzara, Eva Marie Saint, Steve Lawrence (yes, that Steve Lawrence), Robert Shaw, Pat Hingle and Peter Sellers, Serling’s story is a cautionary tale for an unsettled America on the verge of nuclear war and societal collapse. You know, real cheery stuff to put you in the holiday spirit.

A Carol For Another Christmas tells the story of a man by the name of Daniel Grudge (Sterling Hayden); as fitting a name as that of his literary predecessor Ebenezer Scrooge. Mr. Grudge is quite wealthy and even more bitter, the latter due to the death of his son, Marley, killed on Christmas Eve during World War II. It’s this tragic personal loss that influences Grudge to adopt a strict isolationist stance on nuclear war and global policy. Grudge’s nephew, Fred (Ben Gazzara), is the embodiment of the ideal global citizen, espousing the views of the United Nations, an organization barely twenty years old and dealing with the complexities of the Cold War. Despite Fred’s convincing plea, Grudge wants no part in supporting his nephew’s charitable work or the mission of the United Nations, opting for the “eh, let’s just nuke ‘em” approach. With his nephew’s haunting words and the anniversary of his son’s death weighing heavy on his mind, Grudge heads into what will be a restless, life-altering night.

True to the Dickensian tale, the film features the three helpful apparitions: the Ghost of Christmas Past (Steve Lawrence), the Ghost of Christmas Present (Pat Hingle) and the oft-terrifying Ghost of Christmas Future (Robert Shaw). Each ghost accompanies Grudge to significant events past, present and future, to reconcile mistakes and injustices in an effort to gain understanding and achieve peace throughout the world. Grudge sees countless dead soldiers from every war and country; the Ghost of Christmas Past argues that broken communication and lack of diplomacy in the global community is the root cause of the deaths of these soldiers. Grudge witnesses more atrocities throughout the world: the horrific aftermath of Hiroshima in the badly burned children laying amongst the rubble of nuclear fallout; greed and gluttony in the face of innocents starving while falsely imprisoned in internment camps; and the destruction of decent, respectable civilization in favor of the ultimate self-absorbed, micro-isolationist society.

Of course we all know how the story goes, right? The vision of a bleak future, followed by an unpleasant demise, ultimately changes our protagonist for the better. We certainly see this hurried metamorphosis in Mr. Grudge, but there’s no flinging open the snow-covered window, buying expensive poultry, or saving the life of that adorable scamp Tiny Tim. Although Grudge has experienced a change of heart, the world waiting for him is still very much in grave danger. A Carol For Another Christmas is a call to everyone, America in particular, to put an end to all wars in favor of international diplomacy. Rod Serling collaborated with the United Nations to bring this message to homes across the country. With a large corporate sponsorship by Xerox, Serling and Mankiewicz were able to broadcast the film one time, commercial-free on ABC on December 28, 1964. Many of the actors waived their normal salaries due to the importance of the film’s message, especially considering current events at that time, such as JFK’s assassination in 1963 and the escalating conflict in Vietnam, not to mention the never-ending nightmare of the Cold War.

Despite its important message, A Carol For Another Christmas is dry and preachy; definitely not an entertaining film, and certainly not enjoyable like its other Christmas Carol counterparts. It is, however, an interesting and rare piece of television and political history. The film is also eerily prescient. Without stepping too far into potentially treacherous political waters, its argument for diplomacy, human rights and inclusion is worth serious consideration, especially when presented with the Ghost of Christmas Future’s nightmarish vision of a demagogue-led society. The leader “Imperial Me” (Peter Sellers) is a sobering reminder of the dangers of an unchecked ego and isolationist thinking. This is certainly not what one wants to reflect upon during the holiday season, but we all know Santa doesn’t always bring what’s on your list.

This piece was originally published at StreamLine, the official blog of FilmStruck on December 24, 2016 and can be found archived here. 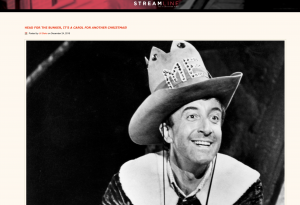