The Man Who Could Work Miracles (1936), now streaming on The Criterion Channel of FilmStruck, is a lovely, albeit odd little comedy based on a short story written by H.G. Wells, directed by Lothar Mendes and produced by Alexander Korda. The always endearing Roland Young stars as George McWhirter Fotheringay, an average man who works as a salesman in a small department store. Unbeknownst to Fotheringay, three gods, Player, Observer and Indifference, agree to conduct a celestial experiment by granting the power to perform miracles to a common, unremarkable man. The gods are curious to see how a lowly human will handle such incredible power. Once Fotheringay discovers his newly acquired, if confusing, miracle working abilities (completely by accident, by the way), he keeps it to himself, only practicing magic-type tricks in his home. Soon, however, Fotheringay is quite eager to share his secret, first performing miracles for his co-workers, his boss and even the local vicar. Eventually attempts are made by others to exploit his newly acquired talents in return for monetary gain, vanity and power.

I have often thought about what I would do if I were granted the ability to influence others and change the world. Not necessarily possess magical powers, but somehow have enough wealth and clout to make a significant impact on global issues: famine, equality, healthcare, peace… You know, all the things young people wish for before entering their cynical adulthoods. Would I harness that power for the good of all? Would I sell out in exchange for more power, or become easily influenced by others with nefarious intentions? Ultimately I think it would be an enormous responsibility for any one person to have, especially one who is bestowed such power overnight, with little guidance or support from good, well-intentioned people. And yet, our world is filled with individuals who have the ability to do great things for their fellow humans in need but choose otherwise. They are influenced by those with even greater power for fear of losing what little slice of control they enjoy now. A very frustrating reality in a world filled with complicated politics and high financial stakes.

In The Man Who Could Work Miracles H.G. Wells certainly had a thing or two to say about greed, corruption and the ridiculousness of social class. When presented with an opportunity to initiate a “Golden Age,” a sort of utopic world where there are no troubles of any kind, Mr. Fotheringay cannot do so without interference from those who are already at the top of the social hierarchy. Although Fotheringay’s intentions are mostly good (there’s one terribly arrogant attempt to use his abilities to make a woman fall in love with him), he is unable to bring his vision of a perfect world to fruition. Out of frustration and a final attempt to achieve his idea of a utopia, Fotheringay appoints himself king, making unrealistic demands of those he has brought unwillingly into his kingdom. Even an average, nice, well-meaning man like Mr. George McWhirter Fotheringay is susceptible to the evils that lurk within positions of power. At the end of their experiment, Player, Observer and Indifference realize that mankind cannot be given such power at once for fear of catastrophic failure, but rather given little bits of wisdom and understanding over time in hopes that man will eventually evolve.

I would like to think that I would do the right and honest thing if I stumbled upon a similar fate as Mr. Fotheringay and possessed the ability to perform miracles. I would decry any attempts to monetize my powers or to take advantage of vulnerable people. There would be no war or hunger or sickness. I would make our world in the image of Shangri-La, that beautiful paradise in James Hilton’s Lost Horizon. Of course we all know something this pure and this perfect is impossible to obtain. One person cannot hold all power without it being manipulated for personal gain, whether by the person in control or those who seek that same power.

The Man Who Could Work Miracles is a delightfully endearing, British fantasy-comedy that manages to sneak in a pretty important message. Roland Young, every diehard classic film lover’s character actor MVP, is charming as the befuddled and powerful Fotheringay. Ralph Richardson is nearly unrecognizable as the eccentric, gregarious Colonel Winstanley, one of the key instigators in corrupting Fotheringay’s miracle-working talents. Most surprising is a brief appearance by a very young, very oiled, very tanned, very nude George Sanders, as the god Indifference. (I mean, could there be more brilliant casting here?) Luckily I was sitting down when Sanders appeared on screen, otherwise I would have totally fallen over. (Alright, so I have a thing for George Sanders. But then again, who doesn’t? It’s that sinfully delicious voice of his.) Along with the excellent performances by Young and Richardson, The Man Who Could Work Miracles cleverly relies upon special effects to demonstrate Fotheringay’s miracle-working. Although these effects grow a bit tiresome after a while, as special effects often do, luckily we are still left with an engaging story, great performances and an extremely important lesson.

This piece was originally published at StreamLine, the official blog of FilmStruck on January 5, 2017 and can be found archived here. 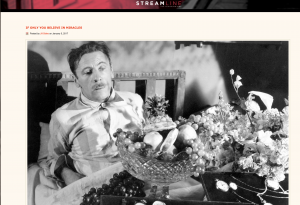 If You Believe They Put The First Men in the Moon…

by Sean Barron H.G. Wells is one of the most revered classic authors, and sits on the Mt. Rushmore of sci fi beside Jules Verne, Isaac Asimov and Ray Bradbury (some would put either Frank Herbert or […]