Isn’t Michael Redgrave simply marvelous? No matter the role, Michael Redgrave brings a sort of respectability and class; he commands the screen. Take his brief performance as the unnamed, mysterious uncle in Jack Clayton’s The Innocents (1961). The few minutes he is on screen, sharing a scene with that naive, inexperienced governess played by Deborah Kerr, Redgrave dominates, casting an unsettled tone over the film from the very start. The uncle never reappears in the film, his character only being mentioned occasionally in passing conversation. And yet, his domineering presence is felt until the last haunting moment of the film. Or how about Redgrave’s performance in Alfred Hitchcock’s The Lady Vanishes (1938), a great thriller surrounding mystery, missing persons and intrigue. Then there is Redgrave’s performance in the wonderfully bizarre Dead of Night (1945), which tells its interesting story in a series of vignettes; Redgrave’s insane ventriloquist character being absolutely terrifying. I recently discovered Redgrave’s masterful performance in the little known Time Without Pity (1957), now available on The Criterion Channel of FilmStruck (and coming to the FilmStruck portion of the service on February 10, 2017). Directed by blacklisted American expatriate Joseph Losey, Time Without Pity is an effective, taut noir thriller.

Michael Redgrave is David Graham, a bloated and ragged deadbeat writer and an alcoholic who has just been released from a Canadian rehab facility, where he spent a great deal of time in a relatively futile attempt to treat his alcoholism. During his stint in rehab, David’s son, Alec (Alec McCowen), who resides in London, has been falsely accused of murdering his girlfriend, Jennie Cole. Due to a lack of evidence, Alec remains the lone suspect in the case and is sentenced to death by hanging. Alec’s devoted lawyer, Jeremy Clayton (Peter Cushing), attempts to prove otherwise, but time is quickly running out. Clayton meets up with David Graham, who has recently arrived in London, and the two begin working together to find any possible clue as to who the real murderer could be. Unfortunately, Graham and Clayton are working against the clock with only a mere 24 hours before Alec is executed.

Complicating matters is David’s addiction, which is constantly looming over him, at times rendering him completely incapacitated. He paces like a caged animal, profusely sweating, shaking and confused, trying to stave off the cravings for a drink. With the stress of his son’s impending death becoming utterly unbearable, Graham is left helpless and vulnerable, unable to remain sober. While he demonstrates some restraint by not drinking his way to a devastating bender, David does impede his amateur investigative work, losing precious time that he cannot get back. Further complicating matters is the estranged relationship with Alec, who has a hard time forgiving David for being absent during his arrest and trial. David makes every attempt to make up for lost time, but his illness and fragile mental state leave him looking pathetic and weak; it’s heart-wrenching.

What makes Time Without Pity such a great little film (besides Michael Redgrave’s performance), is how it lets the audience in on who is the real killer. In the opening moments of the film, we are witnesses to the murder of Alec’s girlfriend Jennie. It is very reminiscent of the opening scene in Michael Curtiz’s Mildred Pierce (1945) where we witness the demise of an unidentified man (who we later learn is the fortune-hunting, creepy mooch Monte Beragon). Knowing who is ultimately responsible for the murder is equally effective as it is frustrating, making for a suspenseful 90 minutes. Feeling the pressure of the clock ticking, I found myself yelling at the screen, as if I could somehow catch David Graham’s attention, leading him to the real murderer, and thus saving Alec’s life.

In addition to Michael Redgrave, Time Without Pity features excellent performances by Leo McKern as the explosive and violent Robert Stanford; Peter Cushing as Alec’s calm, effective lawyer Jeremy Clayton (it’s such a relief to see a non-CGI Peter Cushing); Ann Todd as Honor Stanford, the secretive wife of Robert Stanford; Paul Daneman as Brian Stanford, the Stanford’s adopted son and Alec’s best friend; Alec McCowen as the condemned Alec Graham; and a brief cameo by Joan Plowright as Agnes Cole, Jennie’s sister. With its many twists and turns, false leads, lies, drunken stupors and sordid affairs, Time Without Pity is a must-see, especially for Michael Redgrave fans and those who have an affinity for dark “B” film noir.

This piece was originally published at StreamLine, the official blog of FilmStruck on January 14, 2017 and can be found archived here. 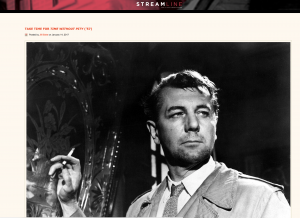 I’ll admit that I’ve always been fairly ambivalent toward actor Stewart Granger (or “the other Jimmy Stewart,” as I like to call him). I’ve never found him, or his films, particularly entertaining. Every once […]