Each winter, after all the excitement of the holiday season has passed, I always feel a touch of melancholy. The shortened days with their gray skies, bare trees and cold winds have a lonely feel to them. Although winter this year has been quite mild, with plenty of sun-filled, picnic-perfect days, I still find myself longing for those fun, carefree summer months. Since we are stuck with winter for a few more weeks (in the South, anyway), I immersed myself into one of my favorite romantic films: David Lean’s Summertime (1955).

Summertime is gratifying from the moment the opening credits begin. The title sequence is filled with gorgeous paintings backed by an Alessandro Cicognini score (a frequent collaborator with famed Italian director Vittorio De Sica). In the film’s first scene, we are introduced to Jane Hudson (Katharine Hepburn), a single, middle-aged Midwesterner on her first trip abroad to Venice. As her train pulls into the city, Jane can hardly contain her excitement. With a limited Italian vocabulary consisting only of a small handful of basic greetings, Jane manages to catch a water taxi to her hotel. (She quickly learns this is the only kind of taxi in Venice.) Once at her hotel, Jane becomes acquainted with other American visitors, looking forward to spending time with them talking, drinking and soaking up the Venetian sun. She soon discovers that her new acquaintances, however friendly, are coupled up and none too keen on adding a third wheel. Jane’s initial excitement doesn’t last long, as she realizes she’s alone in a city filled with lovers.

What Jane doesn’t realize is that she too can find love and romance if she’s willing to be truly open and live in the moment. A chance meeting in the Piazza San Marco leads Jane into an unexpected, deeply passionate affair with the devastatingly handsome Renato de Rossi (Rossano Brazzi), the owner of a quaint antique shop. In Jane’s mind, she views their affair as impossible and forbidden, especially considering that Renato is married, albeit separated, with children. Renato gently chides Jane over her repressed, American viewpoint on sex, encouraging her to give in to her needs and desires. He views her as a beautiful woman, not a lonely spinster, giving her confidence to explore her untapped sexuality. Jane’s fears over her seemingly old age and loneliness quickly disappear as she falls in love with Renato.

Summertime is like a luscious watercolor painting come to life. Its on-location setting gives the film an authenticity unmatched in even the best of designed sets. It also provides the audience with a real glimpse into life in Venice, almost like lost footage from one of the James A. FitzPatrick Traveltalks shorts. Although the city is a prominent star in the film, David Lean and his frequent collaborator, cinematographer Jack Hildyard, place Katharine Hepburn at the center of attention. Summertime is every bit Hepburn’s film. Lovingly composed closeups of the 48 year old actress in stunning technicolor were incredibly bold artistic choices, especially considering cinema’s obsession with youth and unattainable beauty. Hepburn was never one to conceal her age, making the role of Jane Hudson a perfect fit for her. Rossano Brazzi is not an incredibly strong lead, especially alongside a consummate actress such as Hepburn. Apparently Vittorio De Sica was originally considered for the role of Renato. While most people could watch De Sica read the phonebook, myself included, his casting might have taken some of the much-deserved spotlight from Hepburn and her Jane Hudson character. Brazzi is handsome and quite charismatic (although not De Sica charismatic), and gives Hepburn plenty of room to command the screen.

What makes Summertime such an appealing film is its unapologetic sentimentality over the fleeting nature of romance. The summer months give way to all the things we’d like to do but can’t during other times of the year. There’s something truly special about summer, when everything is in perfect harmony. It’s hot, sometimes stiflingly so, but in exchange the days are longer, though few, and the nights are magical. Jane’s romance with Renato is much like summer, burning hot and fast, taking in every possible moment, but unable to last.

This piece was originally published at StreamLine, the official blog of FilmStruck on February 4, 2017 and can be found archived here. 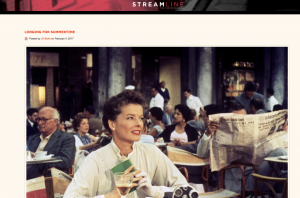