Michael Powell and Emeric Pressburger’s I Know Where I’m Going! (1945) is a lovely, simple tale of stubborn self-confidence, the unexpected nature of life and unlikely romance. Wendy Hiller, known best for her portrayal of Eliza Doolittle in the Anthony Asquith/Leslie Howard production of Pygmalion (1938), is Joan Webster, a determined, self-assured British woman who has always made her own way. Since childhood, Joan appeared to methodically plan out every aspect of her life, including items that she had absolutely no control over. After finishing her schooling, Joan informs her father that she has made arrangements to marry a wealthy industrialist. The news of her marriage isn’t particularly happy, or calling for elaborate celebrations. Joan approaches the announcement and impending event in a rather cold, methodical way, like one would a business merger or the purchase of large kitchen appliances. At some point early in her life, Joan set the goal of marrying a wealthy man, with love clearly being secondary, if completely optional. It’s clear this engagement is more the result of her irrational stubbornness to fulfill one of her goals than the pursuit of true love. It all makes perfect sense to Joan, as it allows for her to move to the next planned stage in her adult life. As we all know, life doesn’t always go as planned. From the beginning, it’s clear that Joan is on her way to making a terrible mistake.

To start her new life with her soon-to-be rich husband, Joan must travel to a remote island located in the Hebrides in Scotland. Her journey is long, but her fiancée’s staff has taken care of every possible detail, allowing for Joan to have a relatively carefree trip. In the final leg of her travels, Joan arrives on the Isle of Mull, with her final destination, the fictional Isle of Kiloran, very much in view and just a short motorboat ride away. Her detailed, flawless itinerary is unexpectedly halted due to dangerous weather, leaving her stranded on Mull for the night. Joan isn’t the only one headed to Kiloran: Enter Torquil MacNeil, played by the dashing Roger Livesey.

Torquil is a naval officer who is headed home to Kiloran to spend his shore leave. As frustrating as the weather delay is for Joan, Torquil doesn’t appear to be too bothered, even though he only has a week of leave. He has many friends on Mull and very much enjoys their company, the slower pace of life and the island’s beautiful surroundings. Despite her stubborn eagerness to get to Kiloran, Torquil very much enjoys Joan’s company and makes every attempt to convince her to take life as it comes. With each passing day, sailing conditions continue to worsen, prohibiting passage to Kiloran. As Joan and Torquil spend more time together, it’s clear they are falling in love. Joan struggles to let go of her plans and what she originally thought she wanted despite her growing fascination with life on Mull and attraction to Torquil.

Joan’s self-confidence and initiative is admirable, but it keeps her from completely enjoying life. She initially refuses to accept the fact that sometimes plans change. Maybe it’s fear of the unknown or perhaps fear of appearing weak. Once she sees that unpredictability can bring about true happiness, Joan lets down her guard and accepts life’s little surprises.

Like so many of Powell and Pressburger’s films, I Know Where I’m Going! begs repeat viewings with its simple, charming, character-driven storyline. It’s a masterpiece of storytelling, and one of Powell and Pressburger’s greatest hidden gems. Roger Livesey is absolutely delightful as the homesick, romantic naval officer Torquil MacNeil. I Know Where I’m Going! was the actor’s second collaboration with Powell and Pressburger, their first being the magnificent technicolor epic The Life and Death of Colonel Blimp (1943) and A Matter of Life and Death (1946) their third and final film. With each of these performances, Livesey’s characters are almost mythical, ripped from the pages of a beautiful fairy tale. At first, his Torquil MacNeil appears bland and quite average, but it soon becomes clear that he’s so much more below the surface. Livesey manages to portray Torquil as both restrained and larger-than-life; a sentimental, romantic man with a very simple, optimistic viewpoint on life. Hiller’s Joan Webster is a strong feminist character who isn’t afraid to challenge convention or fight for what she wants despite various obstacles. Joan’s main flaw is confusing change and lack of control (especially of things that can’t possibly be controlled) with weakness, and she almost loses everything because of it. When Joan discovers that Torquil MacNeil isn’t wealthy, but is rich in friendship and happiness, she opens up to the possibility of allowing for change in the course of her future. In Joan’s realization lies the important lesson of living in the moment and taking on new adventures, something that we all need to be reminded of every now and then.

This piece was originally published at StreamLine, the official blog of FilmStruck on February 18, 2017 and can be found archived here. 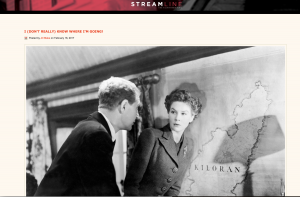 In 1940, the British government asked director Michael Powell to make a film supporting the ongoing war effort against Nazi Germany. Along with his partner, Emeric Pressburger, Powell wanted to use the sanctioned platform to […]