In 1948, director Joseph Losey made his first feature-length film, the beautiful technicolor comedy-drama, The Boy With Green Hair for RKO Pictures. Based on the 1946 short story written by Betsy Beaton, The Boy With Green Hair stars the great Dean Stockwell, Pat O’Brien and Robert Ryan. This post-WWII film undoubtedly attracted audiences, especially families with children, with its title and a shamrock-haired Dean Stockwell featured in the advertisements. Although the title and the opening credits suggest a fun-filled story, much like the live-action Disney films of the 1960s and 1970s, Losey’s film puts the spotlight on the very serious topic of war, its aftermath and victims.

Dean Stockwell is Peter Fry, a young boy who is in search of a place to live while he awaits the return of his parents, whose work is never specified, but it’s clear they are somehow tied to the war effort. After hopping from relative to relative, most either unable or unwilling to raise a child, Peter arrives at the home of an old, retired actor nicknamed “Gramps” (Pat O’Brien). Peter is initially skeptical of his new surroundings and a bit defensive with his new caregiver, worried that he will be cast out and sent elsewhere. When Peter discovers that Gramps is not only happy to have him around, but treats him as family rather than an unwelcome house guest (as much of his biological family had done before), Peter lets down his guard and settles into a new, happy and normal life. After he and his schoolmates volunteer to help war orphans worldwide, Peter discovers that his parents were killed, making him a war orphan too. Dealing with feelings of betrayal and abandonment, Peter, with the kindness and love of Gramps, tries to make sense of his parents’ death. The next morning, after taking a bath and washing his hair, Peter is shocked to find his curly, dark hair has turned bright green. 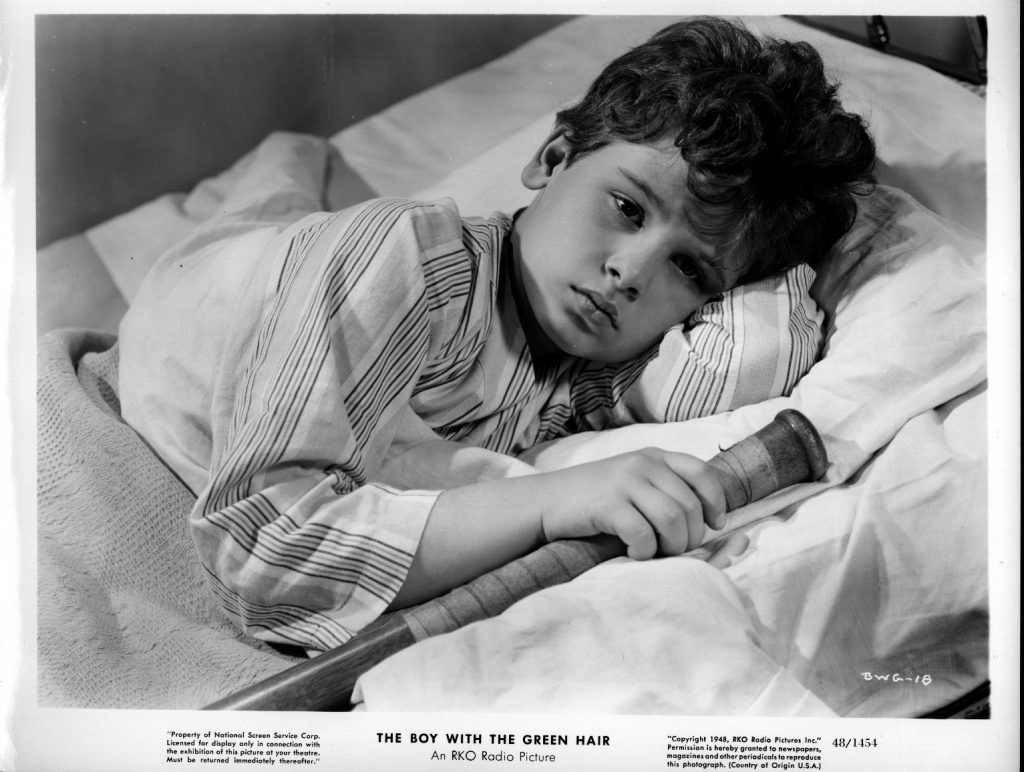 Already feeling like an outsider because of his war orphan status, Peter is angry and confused over his hair color and tries to figure out how to get it back to the way it was. The local townspeople stop and gawk at Peter when he walks by, acting like he’s somehow diseased. Peter is also bullied by many of his classmates who threaten to cut his hair. It isn’t until Peter has a vision, where he is visited by a group of war orphans, that he learns to accept his green hair and use it as a way to spread the word about peace and call attention to the plight of war orphans across the globe.

An important film at its release, The Boy With Green Hair is more timely than ever. With the seemingly endless wars throughout the world and the ongoing refugee crisis in Syria and elsewhere, the film’s message is one that everyone needs to hear over and over: there are many different kinds of victims of war. In addition to the expected injuries and casualties amongst the men and women serving in the military, there are innocent civilians who are unknowingly targeted, left to deal with the fallout of a war they most likely didn’t want in the first place.

Along with its powerful story, The Boy With Green Hair features an outstanding performance by Dean Stockwell, who was one of Hollywood’s greatest child actors (not to mention being an incredible actor as an adult). Stockwell’s first on-screen performance was in the 1945 MGM film The Valley of Decision, staring Greer Garson and Gregory Peck. However it wasn’t until his next performance, Anchors Aweigh, also in 1945, that Stockwell captured audiences. By the time Stockwell made The Boy With Green Hair he had established that he could play both comedic and dramatic roles (see Song of the Thin Man and Gentleman’s Agreement, both released in 1947), making him a perfect choice to play the war orphan Peter.

Although I have seen The Boy With Green Hair before, I was never really affected by its message, something that I am certainly not proud of and very ashamed to admit. This most recent viewing, however, completely floored me. For one, being a parent has changed my perspective on almost everything and has, I think, made me more empathetic toward issues surrounding children. The photographs and videos of refugee families carrying their children out of harm’s way are powerful and jarring; they are a very real manifestation of every parent’s worst nightmare. I also thought about little curly-headed Dean Stockwell serving as the face of WWII war orphans juxtaposed against today’s “poster child”: that young boy in Aleppo, with the beautiful thick head of hair, bloodied and covered in dirt, staring into the camera and into the eyes of the rest of the world. These two children, one fictional and one all too real, are more similar than not; their lives dependent upon our actions. I couldn’t help but think about these images while watching The Boy With Green Hair, and how this nearly 80-year old film with the message of peace and love-for-all is something that we still need to be reminded of today.

This piece was originally published at StreamLine, the official blog of FilmStruck on March 4, 2017 and can be found archived here. 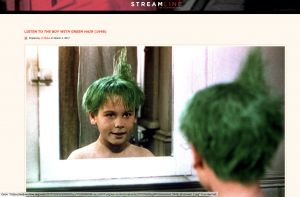