It’s not often you come across a story centering around infidelity that is portrayed as sweet and innocent, deserving of the respect and empathy of its audience. In film, especially classics, adultery is typically met with some form of harsh punishment, particularly for the women involved. David Lean’s Brief Encounter (1945), based on playwright Noël Coward’s play Still Life (1936), offers a snapshot of the short-lived romance between two people stuck in the monotonous rut that life can occasionally works its way into. Lean’s film handles the delicate, complicated nature of infidelity with sensitivity and compassion. Laura Jesson and Alec Harvey (Celia Johnson and Trevor Howard) are not careless in their affair, at least not at first. They know that any kind of a future together is impossible. They acknowledge their spouses and families back home. They understand the social implications of an affair. Both Laura and Alec are seeking something that was lost long ago in their marriages. Perhaps a sense of adventure or simply yearning for that exciting feeling that comes with a new romance, if only for a brief moment.

In the first minutes of Brief Encounter, we unknowingly witness Laura and Alec’s final minutes together, publicly staged, before parting ways forever. Although the full story of their relationship has yet been told, it’s clear this moment is significant and the story leading up to it a deep, emotional journey. We know nothing about these two people, yet somehow we know everything. The love, respect, friendship and sadness is so strongly conveyed through coded expressions and exchanged glances; we know this is a rather melancholy meeting, and not a joyful reunion over tea.

Laura Jesson is like so many suburban housewives: in a stable marriage that, while once romantic, has now evolved into a secure, if boring, relationship. There’s nothing particularly wrong with her marriage; her husband obviously adores her and she appears to be happy enough. It isn’t until her weekly shopping trip to town and a random meeting with a charming doctor, Alec Harvey, that she realizes the depths of her loneliness and the possibility of a greater love. This realization isn’t without some major soul searching, however. Laura’s feelings for Alec cause her great stress, as she knows that she mustn’t stray from her husband and obligations at home. Laura allows for a friendship to develop between her and Alec, and while it’s relatively innocent on the surface, she’s far more emotionally invested than she should be. Laura also lies to her husband about the details of her trips to town, typically a good indicator that something is wrong or not. Laura is clearly bothered by her lies (sometimes only by omission) and it becomes obvious that dishonesty is new territory for her.

Laura hasn’t consummated her relationship with Alec, but she believes that she has been unfaithful emotionally, and the self-imposed guilt starts to eat away at her conscience. With conflicting feelings of both guilt and an increasing affection for Alec, Laura finds herself on the verge of falling into a passionate affair, coming to her senses before making a regrettable mistake. Although both Laura and Alec are married to others, it’s clear they should be together. Two inherently good people, too good in fact, to give themselves a chance at true happiness.

Brief Encounter is beautifully simple and effective in its storytelling. This fleeting romance between Laura and Alec exists solely because of the brief convergence of two trains, both departing around the same time but leaving the station in opposite directions. Those same two trains cruelly dictate Laura and Alec’s time together as they both rely upon them to return home to their families. Every goodbye between them is far too quick, but of course there’s never enough time for two lovers to say goodbye. Each farewell is more and more difficult for Laura and Alec, as their resolve is quickly fading. These farewells also become more passionate, with the foggy train platform serving as an incredibly romantic setting.

Celia Johnson is perfect as the unhappy and lovelorn Laura Jesson. Her quiet elegance, expressive eyes and delightful laugh gives Laura Jesson a sweet sincerity. Laura’s toying with the idea of an affair with Alec is wrong, yet her happiness hinges on it. It’s hard to begrudge such a lovely woman the possibility of true love and happiness; Johnson is responsible for making Laura an empathetic character, somehow finding a moral center for her on the verge of committing an amoral act. Trevor Howard, in only his second credited role and later known more as a character actor, is surprisingly romantic. Far from matinee idol looks, Howard is real, giving Alec Harvey an honest and pure quality. With their quiet and reserved performances, Celia Johnson and Trevor Howard breathe life into Laura and Alec; two average people living average lives who find themselves in an unexpected and extraordinary romance, however fleeting it may be.

This piece was originally published at StreamLine, the official blog of FilmStruck on March 18, 2017 and can be found archived here. 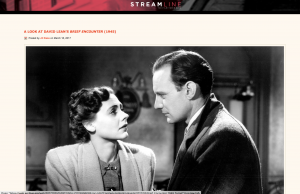