One of the exciting thrills of being a film fan is that there are always new-to-me movies to be discovered. Throughout my journey as a cinephile, I’ve become a fan of actress Miriam Hopkins. I’ve always found her life both on and off the screen to be fascinating. This Georgia-born Southern girl was an anomaly: she was well-bred and well-educated, attending a prestigious private school while studying the performance arts. Hopkins started out as a dancer, but a career-ending injury steered her toward acting. After she signed with Paramount in the early 1930s, Hopkins experienced success rather quickly, working with directors such as Ernst Lubitsch, William Wyler and Rouben Mamoulian. It’s well known that Hopkins had a bad reputation among many of her colleagues. She struggled to find common ground with some of her co-stars (Bette Davis, for example, which was amplified for the publicity), resulting in hostile conditions on set. While she had a tendency to be difficult at times, Hopkins possessed a confidence and self-assuredness that so many actors of her generation attempted, but were unable to obtain. Considering my affection for Hopkins, I was delighted to discover the gem Men Are Not Gods (1936), produced by Alexander Korda and directed by writer Walter Reisch (Ninotchka [1939], Gaslight [1944], Niagara [1953]), in one of his few directorial efforts.

Hopkins is Ann, assistant to a prominent London theatre critic, Mr. Skeates (A. E. Matthews). After previewing a production of Shakespeare’s Othello starring actor Edmond Davey (Sebastian Shaw), Skeates is thoroughly unimpressed and writes a negative review of Davey’s performance. Before the review is published, Davey’s wife Barbara (Gertrude Lawrence) approaches Ann, begging for her to alter Skeates’s review; Barbara explains that her husband was having a bad night, and a negative review written by Skeates will destroy his career. Conflicted over the ethics of editing the review but also empathetic to Barbara’s plea, Ann eventually agrees, despite its negative impact on her career. Now with her interest piqued, Ann attends Othello and not only discovers that Davey really is a wonderful actor, but becomes infatuated with him. When Davey reciprocates, Ann is caught in an affair that she wants, but cannot morally reconcile. It’s when life begins to imitate art that Ann realizes she must back away from her relationship with Davey.

By 1936, Miriam Hopkins already had an impressive filmography with performances in Dr. Jekyll and Mr. Hyde (1931), Trouble in Paradise (1932), The Story of Temple Drake (1933), Design for Living (1933) and These Three (1936). She was a staple of Pre-Code Hollywood with her fast-talking attitude, sexual appeal and strong characters, and while many of her best performances are in those Pre-Code films, Hopkins is terrific in Men Are Not Gods–in that incredibly melodramatic way that only she can successfully pull off. Known more for her work on the London stage and on Broadway, Gertrude Lawrence is wonderful as Ann’s friend and rival, Barbara. Lawrence only starred in nine films throughout her career, but had great success in original stage productions including Private Lives co-starring Laurence Olivier, Still Life, Ways and Means (all three written by Noël Coward), as well as Susan and God, Lady in the Dark and The King and I, which won her the Tony for best actress. Men Are Not Gods also features a small supporting role by a young Rex Harrison as Ann’s boyfriend. This film marked one of Harrison’s earliest performances and was ten years before he made his American film debut in Anna and the King of Siam alongside Irene Dunne in 1946.

While Men Are Not Gods isn’t a masterpiece, it is a fascinating story and a modern take on Shakespeare, at least in part. Also, it’s important to note that since Men Are Not Gods was a British production, there were far different regulations with their censors than those in Hollywood. While certainly not scandalous or lewd, the subject matter of the film is handled in a very direct, adult manner. Had this film been made in Hollywood, the dialogue would’ve been circuitous and all implied moral wrongdoing completely sanitized. As for the dialogue: while Reisch didn’t write the screenplay for the film (co-written by G.B. Stern and Iris Wright), it’s clear that his talent as a screenwriter had a significant role in the development of the characters in the film. While Men Are Not Gods might have had more artistic impact in the hands of a more proficient filmmaker, Reisch’s experience led him to direct a character-driven film. And for this particular story, that’s just fine.

This piece was originally published at StreamLine, the official blog of FilmStruck on April 15, 2017 and can be found archived here. 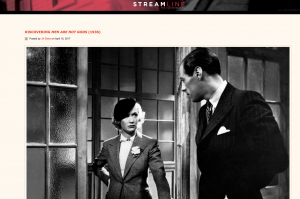