In 1955, Nicholas Ray made the technicolor family drama Rebel Without a Cause, which focused on the experiences of teenagers in the seemingly perfect confines of postwar suburbia. The film was not only a huge success, but it helped to make its star, James Dean, a household name, as well as leaving a significant mark on American culture. The following year, Ray revisited suburban middle America with Bigger Than Life (1956), a melodrama starring James Mason, Barbara Rush and Walter Matthau. Unlike Rebel, Bigger Than Life had a disastrous run in theaters and was critically panned. But like so many films that are highly regarded today, Bigger Than Life has been reevaluated, and is considered by many to be Ray’s masterpiece.

The 1950s were an interesting time for the movies. Along with significant technological advances, such as the various proprietary widescreen formats used by the different studios, many storylines focused on the concerns and struggles of the average American family. Postwar culture redefined the so-called American dream: a comfortable life in the suburbs with a couple of kids and a white picket fence. The importance placed on perfection, and especially on making appearances around peers and social rivals, created an unrealistic portrait of how life should be. This “keeping up with the Joneses” mentality placed unnecessary strain on many families. Along with the sweeping biblical epics and splashy musicals synonymous with the 1950s, filmmakers such as Douglas Sirk, Delmer Daves and Nicholas Ray left their mark on mid-century films by exploring the problems that lie just beneath the perfect surface. The illusion of happiness and security was stripped bare, giving audiences a glimpse into the real struggles faced by the average family. Although many of these melodramas had some exaggerated, “kitchen sink” moments, they were relatable, and perhaps gave audiences the chance to evaluate their own lives and make changes for the better.

Although Douglas Sirk is considered the master of the American melodrama, Ray had a unique take, leaving his own mark on the genre. Instead of exploring the complications surrounding socially inappropriate May-December romances or teenage love, in Bigger Than Life, Ray breaks down social status, gender stereotypes and addiction, demonstrating how it is slowly ripping a family apart. James Mason, who also produced the film, is Ed Avery, a teacher who is very good at his job, but feels like a failure because he cannot adequately provide for his family. To help make ends meet, Ed spends a few afternoons a week working as a dispatcher for a local cab company. Ashamed that he’s taken on the second job, Ed lies to his wife, Lou (Barbara Rush), telling her that he has meetings after school. Thinking her husband is having an affair, Lou is relieved when she discovers the truth. One has to wonder if she would’ve been so understanding if Ed had just come right out and told her about the second job, or if the embarrassment is the product of Ed’s own insecurities.

Ed is also keeping another secret from his wife. For several months, he’s been suffering from mysterious pain and blackouts. With their increased frequency and intensity, Ed is no longer able to hide his condition. After a particularly terrifying episode in front of both Lou and their son, Ed is taken to the hospital for lengthy rounds of testing and evaluation. He is diagnosed with a rare condition and told that he only has months to live, but is given the option of taking a new drug, cortisone, which might keep his illness under control. Warned of the potential side effects of the drug, and that he will have to take it indefinitely, Ed sees an immediate improvement, feeling like he’s been given a second chance. Of course, this high doesn’t last long; Ed abuses the drug, causing him to behave erratically, becoming increasingly paranoid and violent. In one way, the medication frees Ed from his concerns, making him feel powerful and in control, but on the other hand, he digs his family deeper in debt and breaks apart their previously tight-knit familial bond.

Like so many melodramas, there are moments that might seem a bit far-fetched, but the underlying message is still important. Ray carefully examines not only middle-class America’s obsession with class consciousness, but the issues surrounding fabricated ideas of what constitutes masculinity. In many aspects of his life, Ed is concerned with protecting his masculinity and position as head of the house. He hides his condition from his wife for fear of appearing weak, while working in a profession that is largely dominated by women. And to add insult to injury, this noble job isn’t enough to provide for his family. His second job at the cab company is also emasculating. Instead of being a driver with the other men, Ed works alongside women answering phones for the company. And then there’s the obsession with socioeconomic class. While financially he’s probably in the same boat as his fellow cab workers, he considers himself above that. Ed and Lou’s house is perfect on the outside; exactly what you would expect for an average family. But the inside is cramped and the backyard feels wild and overgrown. And if the mounting bills aren’t enough of a reminder of their dire financial status, they have the rusted, broken water heater in the middle of the kitchen– a physical symbol of their status that they’re unable to hide. This perfect veneer begins to show cracks, and Ed and Lou can no longer maintain that illusion.

This beautiful, haunting look into the struggles of the American family was controversial at the time, but we now know that it was, at least in part, an accurate portrayal of what so many were struggling with in the immediate years following the war. The raw emotion and tense drama coupled with Ray’s brilliant use of technicolor and widescreen (a format typically reserved for films set in exterior locations) to portray intimate familial moments makes this film powerful and truly unique. In an impressive career with many incredible films, Bigger Than Life is quite possibly Nicholas Ray’s greatest accomplishment.

This piece was originally published at StreamLine, the official blog of FilmStruck on June 17, 2017 and can be found archived here. 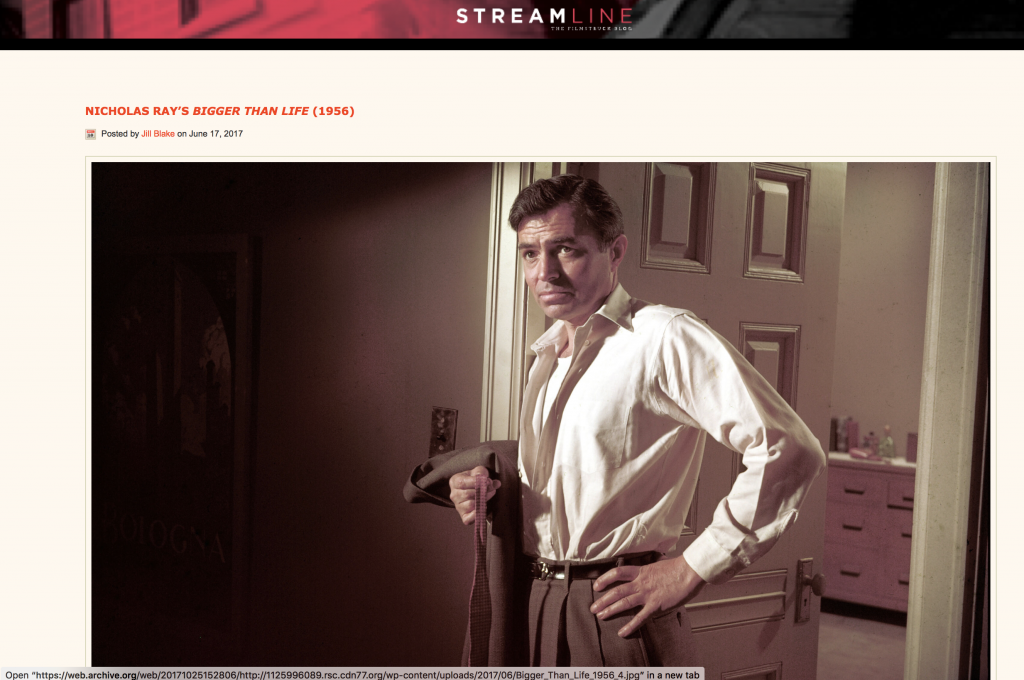 Edgar Allan Poe’s The Tell-Tale Heart (1843) is a chilling piece of short fiction, providing a look into madness through the eyes of a narrator who believes himself to be perfectly sane. Though intriguing in its own […]

The Complicated Morals of a Revisionist Western

In 1961, legendary author and screenwriter Elmore Leonard released his critically-acclaimed modern Western novel Hombre, a story about a white man, John Russell, raised by Apaches and his eventual return to civilization, with its […]