Ruby Gentry has very little in the way of ambiguity. Directed by King Vidor, released on Christmas day in 1952, this hothouse southern drama seethes with frank sexuality and melodramatic tension. Set primarily in the rural North Carolina town of Braddock, the object of Ruby Gentry’s lusty attention, its title heroine, is first seen at the conclusion of what was apparently a difficult life’s journey to this point. Though still a young woman, Ruby is presently a subdued female skipper, a far cry from when, as the film shows in flashback and the narrator declares, she was once so beautiful and alive. Played by the enticing, underrated Jennifer Jones, Ruby, then Ruby Corey, was “born on the wrong side of the tracks,” and for most of her days she faced the burden of an outsider stigma. She did not, however, suffer for lack of suitors, and Vidor soon makes clear why. Lit in a cabin doorway, striking a supple, overtly erotic pose with her distinct curves hugged by concentrated shadows, Ruby is quite a sight indeed. But according to Jim Gentry, a local landowner who unconvincingly tries to downplay the girl’s allure to his friend, the northern doctor Saul Manfred, it’s “just anatomy.” 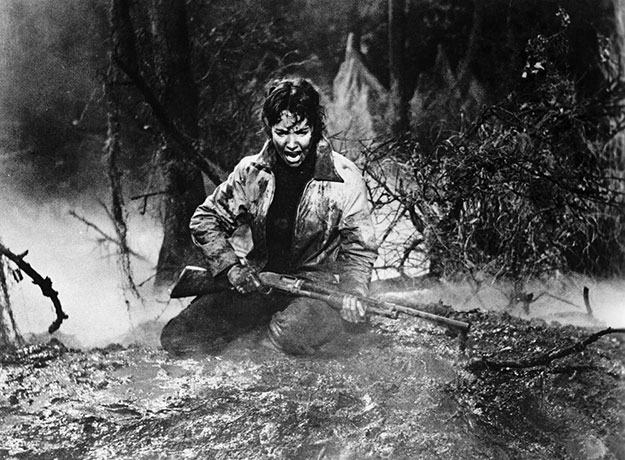 This would be more persuasive if the opening scenes of Ruby Gentry didn’t unfold as they do, with coquettish Ruby ambling through her father’s hunting lodge, caressing her face with the stock of a .30-30 rifle and playfully masquerading as one of the good ol’ boys, her thumbs hitched firmly in the pockets of her jeans. She is a charming tease, “grown up and filled out” as she is indelicately described, and she has a savvy way of loitering around the assembled men, hovering in the frame as an elusive yet persistent focus of Vidor’s camera. Practiced at the art of Southern seduction, Ruby is a denim darling with a patent twang. She is a physical force to be reckoned with.

Largely determined by Ruby’s evolving disposition, guided by Vidor’s compelling direction and empowered by Jones’ performance, the encasing plot of Ruby Gentry essentially revolves around two romantic relationships and their subsequent fallout. The first, the most contentious and most heated, involves Charlton Heston’s Boake Tackman, a judge’s son returned to the region after some time spent in South America, where he picked up tips on irrigation techniques. His involvement with Ruby is intense and passionate, but it doesn’t take long for it to be upended by the platinum blonde contrast of the more refined Tracy (Phyllis Avery). She is a respectable woman, coming from money, and her union with Boake has been planned since they were children. Unmercifully dropped like a hot potato, the simmering Ruby is eventually picked up by Jim (Karl Malden), after his ailing wife, Letitia (Josephine Hutchinson), passes away. Ruby’s effortless access to the Gentry fortune sets local tongues wagging, but most peculiar of all is the fact Jim and Letitia had taken in Ruby when she was just a troubled teenage girl, fearful and vulnerable, giving her comfort and a fleeting life of prosperity. Ultimately, though, it was a life Jim knew she could never have, and sure enough, she is promptly called back to her more rustic origins, to her needy father and her evangelical brother, who continually espouses damnation and hellfire and provides all the reason in the world for Ruby to rebel against such overwrought moral arrogance.

Despite the superficial scandal of his rash remarriage, Jim is genuinely kind and proper, even if there remains a hint of purely selfish motivation (as there is for everyone in the film). His foremost shortcoming is the notion that he can somehow change Ruby, in a sense taming the untamable. Still, having had his innate on-screen decency recently established in Elia Kazan’s similarly sweltering A Streetcar Named Desire (1951), Malden gives Jim an endearing presence, and his consistency of character represents one of Ruby Gentry’s central themes. For all their pronouncements to the contrary, most everyone in this world exists inflexibly in their routine social position. Ruby, especially, is never to forget that she came sashaying into Jim’s affluence by way of an impoverished swampland, and that pedigree is ingrained in her character. Played by Barney Phillips, who was in the early stages of his career, just prior to an extensive television résumé, Dr. Manfred says it’s absurd that one can’t rise up and out of their socioeconomic placement and he encourages Ruby to vacate the “stuffy snobbish town” of her youth. But that’s easier said than done.

And it’s really just the half of it. Ruby’s existence is also one of oppressive patriarchy, casual sexism, and incessant objectification. That she manages to hold her own and even surmount the derision is a feat in itself, almost as if she absorbs the flirtations and leers to reinforce her own strong-willed comportment. This may be an idealized reading, though, because as a film, Ruby Gentry plays right into this unfavorable portrayal, particularly as it concerns Boake and his cruel, impulsive bond with Ruby. From their initial reunion, which is scrappy and ingeniously illuminated by a fitfully shifting flashlight, to the film’s twisted, virulent end, theirs is an uncomfortably irregular lust. Though there are moments of candid romance between the two, there is also something more unsettling. Boake takes advantage of her “wide-open throttle” and is ceaselessly applying pressure—sexual or otherwise. And yet, for instance, when he tries to slither into her bedroom, forcing open the door, she just barely attempts to keep it closed; like their relationship generally, it’s an uncertain opposition, a dubious resistance. 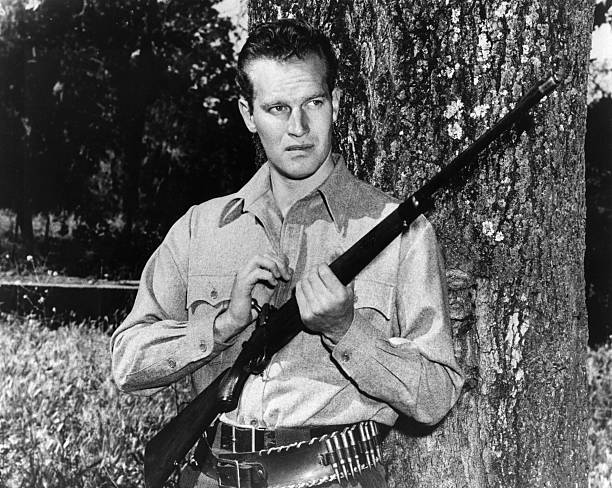 This was one of Heston’s earliest roles, and while he would certainly broaden his range as an actor, thankfully so, his performance is strained and coarse. The role itself is unpleasant, representing the worst of Ruby Gentry’s prevailing sexism, and as Boake perpetually enters and exits Ruby’s life, he simply appears unable to leave well enough alone, be it her or the film. But then there’s Jennifer Jones. Born Phylis Lee Isley, Jones began in the B-movie basement before an astonishing run of Oscar-nominated performances in The Song of Bernadette (1943), for which she won, followed by Since You Went Away (1944), Love Letters (1945), Duel in the Sun (1946), and Love Is a Many-Splendored Thing (1955). Of these celebrated roles, Jones’ Ruby Gentry has obvious parallels to the Mexican-American hellcat she played in Duel in the Sun (also, in part, directed by Vidor), another seductive, sexual outcast. Like this disparaged “half-breed,” Ruby is a formidable figure, harnessing an unapologetic sexuality for her own ends, operating in the face of that which concerns so many others: “What will people say?” She goes through all sorts of emotional states, but her intellectual ferocity is most evident when she retaliates against Boake. Defiant, audacious, and joyful in her vengeance, she remarks on her newfound economic influence, “So far I feel nothing but pleasure.”

In every scene she appears, it is Jones who controls and commands the film, but King Vidor did direct the picture after all, and it is to his expertise one must credit the fertile atmosphere of Ruby Gentry. The film boasts an earthy authenticity, exotic and natural at the same time, and Vidor is just as adept at realizing the genuine downhome qualities of moonshine jugs, hunting excursions, and rural poverty as he is in fashioning a realm of suits and gowns, swanky parties, and high-class privilege. With cinematography by Russell Harlan, who was about to enter his most renowned period of work, leading to six Oscar nominations from 1953 to 1967 (including two in 1963), the film delivers a tangible regional ambiance, even if it was shot in California, partly at Vidor’s own ranch. Written by Silvia Richards, based on a story by Arthur Fitz-Richard, Ruby Gentry does get a little campy and hysterical, and its histrionic dialogue is sometimes cringe-worthy. Newly released on Blu-ray from Kino Lorber’s Studio Classics, sans any bonus material, it’s a mostly middle of the country road entry in what was a spate of southern dramas from the 1950s, features like The Night of the Hunter (1955), Baby Doll (1956), Giant (1956), and God’s Little Acre (1958). For Jones alone, Vidor’s film is worth a watch, but only after these superior titles have been exhausted. 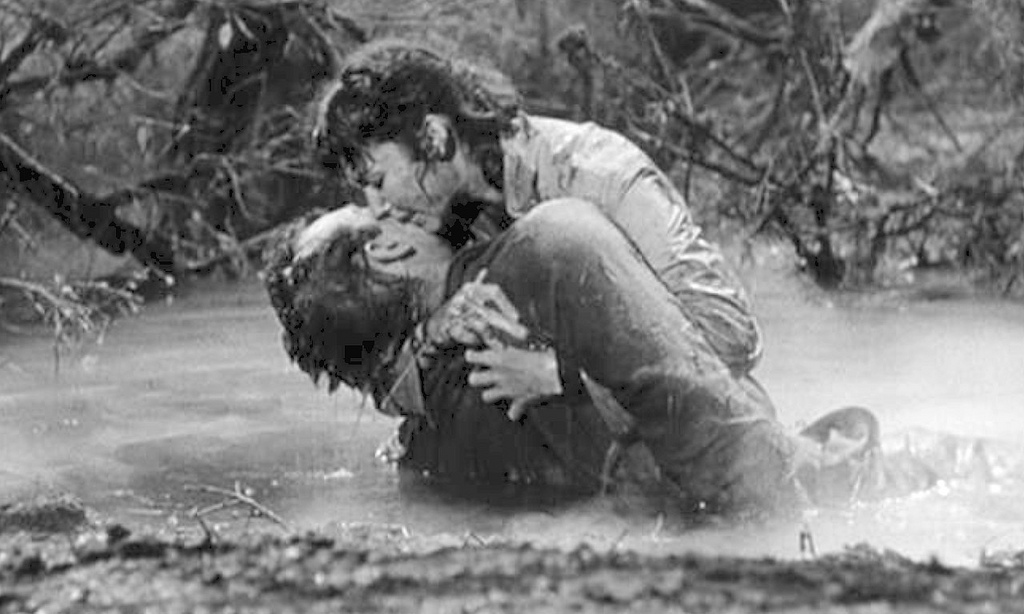 There is STILL Nothing Wrong With Your TV: THE OUTER LIMITS Season 2

The last episode of The Outer Limits’ first season was broadcast on ABC on May 4, 1964. The series had been renewed for a second season, however, there was one big caveat with that renewal. […]