It’s never a good sign when a promotional essay reads almost like an apology or an excuse for the film it’s supposed to be touting. But such is the case with Julie Kirgo’s piece on Harry and Walter Go to New York, which accompanies the Twilight Time Blu-ray of this 1976 Columbia release. Kirgo’s article devotes more than half of its length to the endorsement of the film’s cast and crew, which is quite a stellar assembly, but the credit is generally assigned to the movies everyone made prior to or following Harry and Walter. She notes the pedigree of the film’s director and producer, as well as its production designer, costumer, composer, and so on, eventually getting to the fundamental question: “So here, at last, we have it: Harry and Walter Go to New York offers a superlative staff of filmmakers and film stars. … So why did it fare so alarmingly—legendarily so—at the box office?” The reason, simply put, is that Harry and Walter isn’t very good, and nearly everyone involved has indeed done better work elsewhere. 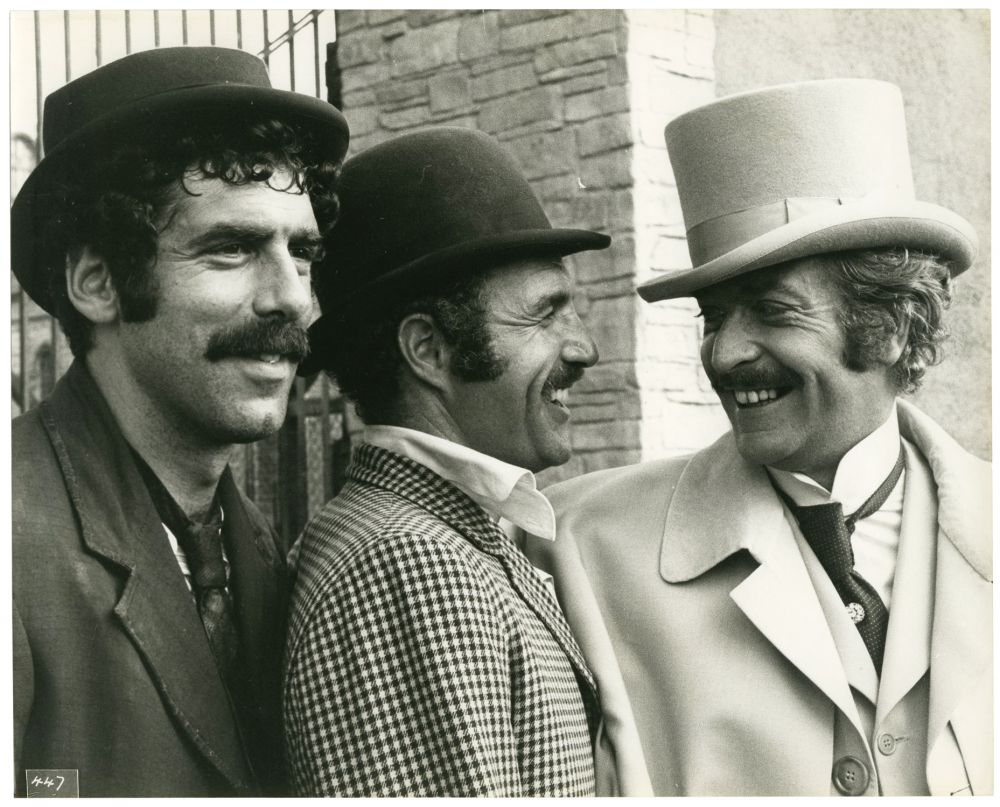 It’s understandable, though, that most discussion surrounding Harry and Walter Go to New York does concern its top-notch talent, and in a way, this focus on professional aptitude connects well with the film’s own narrative, which has central preoccupations with expertise and resulting fame. Directed by Mark Rydell, written by John Byrum and Robert Kaufman, from a story by Byrum and Don Devlin, Harry and Walter begins in the jaunty world of 1892 vaudevillian entertainment, with the titular twosome of Harry Dighby (James Caan) and Walter Hill (Elliott Gould) centerstage in some middling Massachusetts auditorium. These goofy, earnest, and utterly inept song and dance men are amid an opening number laden with drum rolls and clownish shenanigans. Unfortunately for Harry and Walter, their routine also includes a show-stopping swindle that doesn’t go unnoticed by certain duped audience members. Promptly arrested, the hapless duo is sent away to Concord Prison, where they encounter the magnetic “gentleman thief” Adam Worth (Michael Caine), himself recently incarcerated for one of his legendary capers. Notwithstanding their criminal kinship, and the complimentary quips uttered just before their respective apprehension, Harry and Walter deviate from Adam in most every other way; whereas the two showbiz cons arrive shackled in some rickety prison transport, Adam rolls up to the jail with much fanfare, enchanting a gushing crowd of admirers and a bevy of parasol toting beauties. For better or worse, however, these contrasting crooks are inexorably linked by their unlawful ambition.

While Harry and Walter make an entrepreneurial effort to sell gobs of hair gathered from the floor of the prison barber, telling fans it belongs to Adam (they also snatch his buttons, which they peddle along with forged autographed photos), the beloved bank robber enlists the two goofballs as menial servants. Their proximity to Adam grants them insight into the safecracking schematics of his next proposed heist, and their familiarity acquaints them with Lissa Chestnut (Diane Keaton), a do-gooder newspaperwoman who shows up to interview Adam and quite naturally ends up enticing the lot. Inevitably freed of the prison, one way or another, the diverging paths of this fortuitous quartet again intersect, and their antagonistic aspirations bring them together for a felonious showdown at the Commercial Bank & Trust Co., in Lowell, Massachusetts (not, as a point of fact, in New York).

Taken at face value, this is a sturdy premise, with humorous and perhaps even romantic possibilities, which was apparently enough for Harry and Walter to attract the degree of talent it did. But what happened from there, and what is ultimately evident on screen, is that the production grew fraught with difficulty and disappointment and the film suffered as a result. Harry and Walter went over budget and threatened the financial stability of Columbia Pictures. Following a less than promising preview, the film was basically taken from Rydell’s hands; he accused the interfering studio of omitting much of the connective humor, while the powers that be placed the blame on Rydell for botching what should have been a sure-fire screenplay. Of course, neither scenario can wholly account for what goes wrong with the final film.

But it’s not for lack of trying. There are moments, mostly through the efforts of Caan, where the comedic potential appears sound, particularly as he and Gould mess around as unrefined fishes out of water, moseying into a swanky restaurant with confident, naïve bluster, drinking from finger bowls and struggling to understand the menu. Caan, who later dubbed the film “Harry and Walter Go to the Toilet” and fired his management team after its failure, had been riding high to this point, with his Oscar-nominated turn in The Godfather (1972) and recent musical and comedic roles in Funny Lady (1975) and Silent Movie (1976). And there is, though it’s inconsistent, a winning appeal to Harry’s blind bravado (his hammy gags are less successful). Gould, on the other hand, despite his own exceptional work in films like M*A*S*H (1970) and The Long Goodbye (1973), seldom rises Walter above annoying, sniveling sidekick status. Of the “good guys” in Harry and Walter, only Keaton, who had just starred with Gould in I Will, I Will … For Now (1976), maintains an invariable appeal, brushing aside Lissa’s upright, uptight deportment in favor of righteous retaliation: “If that bank has to be robbed, let it be robbed in the name of decency!” 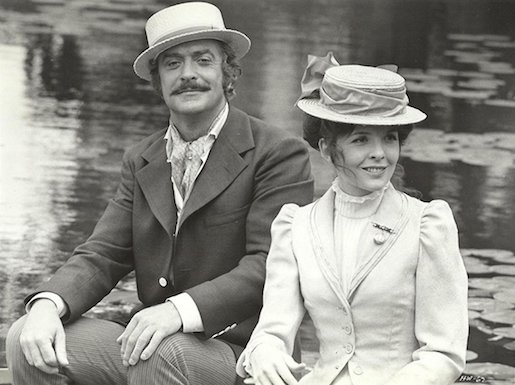 There are several moments when Harry and Walter seems to be hitting its stride, only to repeatedly slip on its own overextended banana peel of comic surplus. It has a simplistically heartfelt depiction of underdog bumblers, constantly engaged in sarcastic squabbles as they remain partners to the end; as the rag-tag team of amateur thieves go up against Adam’s seasoned specialists, the concurrent larcenies to conclude the picture are entertaining and charming; and the film is bolstered by a gaggle of delightful character actors, including Charles Durning, Lesley Ann Warren, Burt Young, and Carol Kane, among others. Most of all, even if he too appears to much greater effect in myriad other films, there is Michael Caine, holding his own in a dastardly and suave solo performance, uniquely independent of other actors and mercifully adding a dose of sanity to the hackneyed routine of Caan and Gould. Unlike their strained mugging, his cruel allure eases into the film, and his presence is rather like his character: refined and efficient.

The executive producer of Harry and Walter, Tony Bill, was also the Academy Award-winning producer of The Sting (1973), but as film historians Eddy Friedfeld, Paul Scrabo, and Lee Pfeiffer caution in their audio commentary for Twilight Time, to compare Harry and Walter with that earlier feature isn’t exactly a fair assessment; to be sure, it pales in most every regard, especially against the effortless camaraderie and charisma of The Sting’s two leading men, Robert Redford and Paul Newman. (Rydell’s film has also be likened to Elaine May’s much-maligned Ishtar, but even that 1987 debacle has more hits than misses by comparison.) In discussing Harry and Walter, Friedfeld, Scrabo, and Pfeiffer do find other points of praise, from the supple and lush cinematography by László Kovács, whose use of diffused soft light looks excellent in the Twilight Time 4K transfer, to the film’s antique set design and David Shire’s score. Alongside anecdotes and bits of trivia, they also proclaim Harry and Walter one of the better films from the 1970s that most have never heard of. That seems unlikely (the “better” part), but maybe it’s also the decade in question that is part of the problem. Not even counting the aforementioned films made by those who comprise Harry and Walter’s noteworthy cast, this period of American cinema is staggeringly prodigious, with a bar set almost unassailably high. This doesn’t come close. 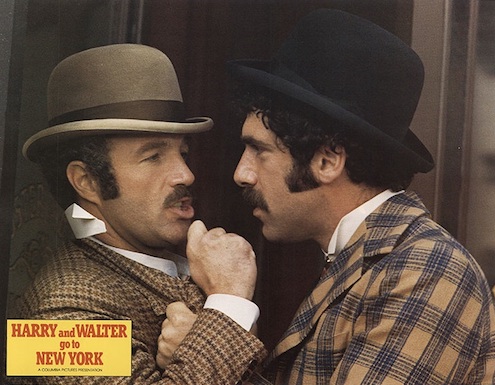 Even if the plot still suffers, Friedfeld, Scrabo, and Pfeiffer also applaud the pace of Harry and Walter, which is fair enough; it’s frequently foolish, but it’s rarely slow. And yet, try as they might, just like Kirgo, they fail to make a convincing case for the film as a whole. In a rather half-hearted justification, Kirgo writes the film should be enjoyed on its own terms, that it is “loaded with charm; it just took a few years for us, the audience, to relax and give the film the credit it’s due.” Alternately, and more accurately, Harry and Walter is as it’s described by Burt Young, quoted in Kirgo’s essay. It’s too much, too self-congratulatory; “It loses its way and nobody knows where it’s going. You lose the pits and valleys for just peaks, and in the end your audience.”

Harry and Walter Go to New York is disproportionate and histrionic, an old timey schtick with imprudent antics and accidents, slide whistle accompaniment, running and skidding to a stop, getting chased by ungainly police, leaping and falling and all other means of absurdity. It’s as if Rydell and company were merely throwing up different forms of comedy to see what sticks, and not much does.