I had no idea that In the Mouth of Madness had gotten middling reviews on its initial release. I’ve always thought it one of John Carpenter’s best films. But part of all that could be tied up with memory; the nostalgia of being a fourteen year old kid watching the film on VHS as soon as it arrived at my local video store. I watched a lot of horror movies back then, and this one had a brief moment that scared the hell out of me, which was rather hard to do at that point. (It’s much easier now, if I’m being honest.) 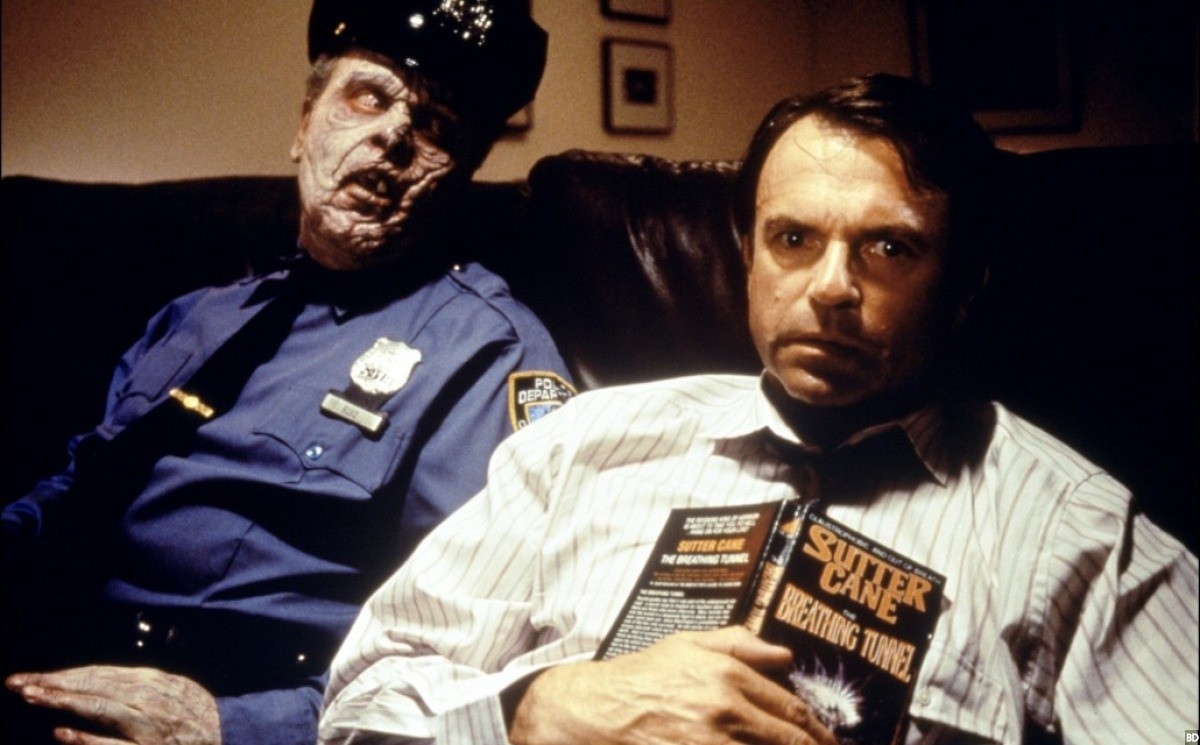 Written by Michael De Luca and directed by Carpenter, the film was based, conceptually, on various works by H.P. Lovecraft. Though it’s not an adaptation and is set vaguely in the 1990’s, the thing sure has the very dark, pulpy spirit of an H.P. Lovecraft story, for better or worse. Plot-wise, the movie doesn’t have much to do with its namesake, the short story “At the Mountains of Madness,” though it does feature weird tentacle creatures from another realm. Not much else you really need in order to call a film “Lovecraftian.”

Sutter Cane (Jürgen Prochnow) is a Lovecraftian novelist with the popularity of Stephen King. “He outsells them all,” says his editor, Linda Styles (Julie Carmen). Linda also admits that Cane’s work has had negative influence over more “susceptible” readers, however, now it’s not just the” susceptible” readers, it’s all of them. Everyone who reads his latest novel becomes a psycho killer.

Enter Sam Neill as insurance fraud investigator John Trent. Sutter Cane has gone missing, and his publishing company is looking to collect. But Trent, who can always sniff out a scam, goes on the road to find Cane and prove that this is all a publicity stunt. Along for the ride is Styles, determined to prove that Cane is indeed missing. 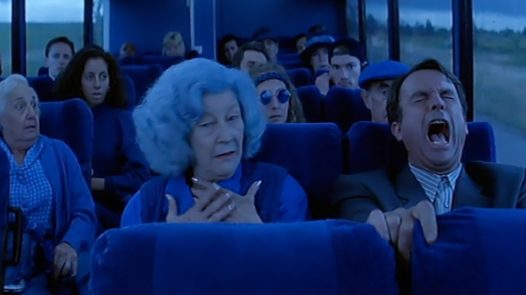 In large part, Cane’s book is a device that answers the question, in a very over-the-top way, “What would happen if the people behind moral panics were right? What if consuming violent media directly led to violence?” Carpenter has a lot of fun with this conceit, and De Luca’s script pushes the idea about as far as it will go. Especially when you consider that there’s also long-dormant tentacle monsters that have been waiting to cross over into the movie’s reality, if only enough people believed in them. And to believe in them, they have to believe in the books. And the books make them homicidal, which makes plenty of room on the planet for tentacle creatures.

If the idea of a book being so insanely popular that nearly everyone in the world is affected by it seems absurd in 2018, don’t worry, it was in 1995, too. So when Trent is asked, “What about people who don’t read?” the answer is quite obvious. What popular book is not eventually adapted into a movie? The moving image, then as now, was the primary form of mass communication. If you really wanted to spread an apocalyptic madness virus, this would be the way to go. Sure, not everyone would see the movie, but by that point, the people who had seen it would have killed them, so it’s quite a moot point.

Of course, there’s always been a debate about the extent to which media influences our daily lives, our personalities, and, ultimately, how we see the world and perceive reality. Saying that it doesn’t influence us at all would be foolish, as would the other extreme. And can you imagine the state of things just a few years from now, maybe a decade or so, when VR replaces less immersive visual information as our primary method of experiencing entertainment and education? When we are fully immersed in an artificial environment that we can feel, touch, move around in, and maybe even taste, how susceptible will we be when the virtual world is almost indistinguishable from our own? Will some madman write a program that literally rewires our brains and makes us homicidal maniacs? Well, as my grandma always said, one can only hope.

In this kind of scenario, the question of free will always comes up. We learn after a while that Cane’s influence extends far beyond people who have read his books. Everyone in the film is a character in a novel (or perhaps a film) authored by Sutter Cane. It takes a while, but Trent’s fiercely independent nature collapses when he realizes that he has no free will, and never did. This is the thing that finally pushes Trent over the edge.

This all gets quite silly when you realize that if everything Trent has done was at one point written by Cane, then his epiphany regarding his lack of free will and his subsequent insanity is also pre-ordained. On one hand, the premise is so stupid that you feel tricked at the revelation. The characters literally make no choices on their own, so ultimately, nothing that we’re watching matters because there are no stakes. On the other hand,  this is the line between pure camp and serious ideas that the best John Carpenter films straddle. It’s an intentional mindfuck, one that reminds us not to take it all too seriously, though In the Mouth of Madness is a very bleak story.

It gets even weirder when you think about how, “yeah, everyone’s a character in a book or a movie by Sutter Cane, so does that make the Cane that appears in the film a character too?” If he is (and it certainly wouldn’t be the first time an author inserted him or herself into their fiction), then he has no more free will than any of the other characters. And at least Trent is eventually exposed to the true nature of the reality in which he lives. The Sutter Cane character will live out his days in ignorance, all the while thinking that he’s virtually a god.

Like I said before, there’s nothing even remotely close to a happy ending to be found here. But the material is quite faithful to the Lovecraft’s idea that humans don’t mean shit in the cosmic scheme of things, and the universe works quite well without us, thank you very much. In most of his stories, his characters are powerless against the evils they’ve unearthed, and totally helpless. This is not very good fortune for the protagonists, and not a very comforting thought for readers, though it does help keep things in perspective.

Re-released by Shout! Factory , In the Mouth of Madness is finally getting the Blu-ray treatment it deserves, and hopefully a new generation of film fans will discover this underrated gem. It’s not Carpenter’s best work, but it’s certainly the best from the nineties and beyond. Carpenter hasn’t directed a feature since 2010, after he released the underwhelming (and not very original) horror flick The Ward, and it doesn’t look like he has plans to make another one. I can’t help but think that In the Mouth of Madness would have made a hell of a swan song.