My, but what a nasty piece of work is Andre DeToth’s Play Dirty (1969). Nearly fifty years after its release it still strikes you as one of the cruelest, most cynical antiwar films ever made. Positively giddy in its nihilistic misanthropy, the film watches a good man’s sundering from his better nature by the ravages of war. When we first meet Captain Douglas (Michael Caine) of the British Army in the North African Campaign in World War Two, he seems a decent, principled man. But by the film’s end we will have witnessed his ambush of an ambulance and the murder of its drivers, his bored indifference towards two rapes, and his evolution into an unyielding commander of some of the most wicked men to ever serve the Allies. Watching Play Dirty is emotionally draining and exhausting, but not unrewarding. As DeToth’s last film, he poured the sum total of his long career’s angers and frustrations towards a broken world in one chaotic scream. The artistry is stunning, the world-view terrifying. Here, there are no heroes. The enlisted men are trigger-happy psychopaths, the commanders glory-hungry sociopaths. There is no hint of honor in anything they do. If ever there was a post-war film to make the Allies seem the villains and the Nazis the victims, it would be this one. Thanks to Twilight Time’s recent Blu-ray release, now anyone can marvel at DeToth’s audacious triumph.

The film follows Captain Douglas as he leads a band of convicted criminals on a suicidal mission to destroy an Africa Korps fuel depot 400 miles behind enemy lines. His second in command is Captain Cyril Leech (Nigel Davenport), an old hand at undercover missions in enemy territory that the military plucked from prison. His crime? Insurance fraud. Not particularly chilling compared to the rap sheet of the murderers and rapists accompanying him and Douglas into the desert, but he’s as ruthless as any Gestapo agent. He thinks nothing of gunning down civilian Arabs at a watering hole or scavenging dead bodies and leaving the corpses unceremoniously unburied. He has such a consistent track record of CO’s dying on him that the higher ups bribe him with a reward for £2000 to make sure Douglas “makes it.” He makes a delicious foil for Douglas; he’s the amoral survivalist to Douglas’ idealist patriot. Over time, Douglas comes to realize Leech’s barbaric tactics are more successful and practical than his own, so he begins to adopt them. And whereas at first their mission is a disaster—they’re waylaid by mined roads, plagued by vehicle accidents, and infested with general insubordination among the “enlisted men”—they soon begin to succeed. They bypass Nazi patrols and make it to the fuel depot. But for what? 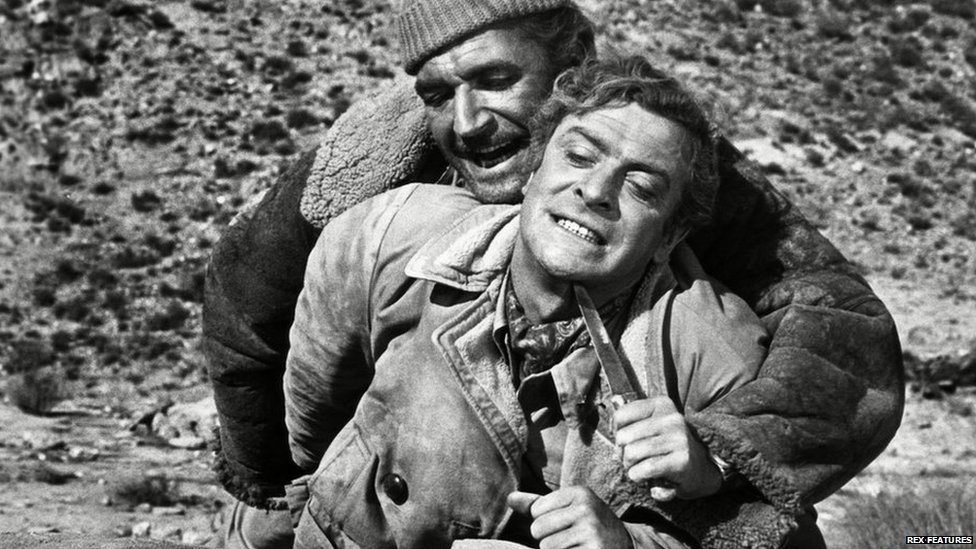 What Douglas doesn’t know is that his mission was doomed from the start. Eager for fame, commander Brigadier Blore (Harry Andrews) sent Douglas and Leech to die at the hands of the Nazis, weakening their defenses long enough so he could swoop in after them, destroy the depot, and claim the victory. But Leech proves too smart for Blore and too impatient with Douglas’ noblesse oblige to fail. After all, if Blore gets there first and Douglas dies, he’s out £2000. That the Nazis, perhaps the most evil regime in human history, would be crippled on the African continent is inconsequential. For him, it’s just another payday.

This is the heart of both Play Dirty and DeToth’s outlook on war: there can be no nobility in the wholesale slaughter of humanity. Everyone involved will figure out their own racket. The only chance one has to survive is to either keep one’s heads down long enough and get lucky or ascend high enough in the ranks where you can sit comfortably in an office and send other men out to die. There can be no in-between. Sides don’t matter, causes don’t matter, nations don’t matter. It is here that we understand the truly irony and cynicism of the film’s ending: having completed their mission, Douglas and Leech try to surrender to British forces. But the British soldiers mistake their covert Nazi disguises as real uniforms and gun them down, oblivious to their status as national heroes.

Are you upset I spoiled the ending for you? Don’t be. The only question you should ask yourself is whether the film could have ended any other way.