Love is no accident. That’s what Macon Leary comes to find when he meets Muriel Pritchett. No matter how hard Macon tries, he could have never planned the events that unfold when he’s forced to go back to his childhood home.

The Accidental Tourist (1988) directed by Lawrence Kasdan, chronicles the life of Macon Leary as he faces the reality of his marriage and the death of his son. Writer of travel guides called “The Accidental Tourist,” Macon tries to help tourists avoid accidentally falling into the wrong areas, literally and metaphorically, when they travel. Little does Macon know he’s about to fall into what seems like the wrong predicament only to learn there are no accidents when it comes to love. 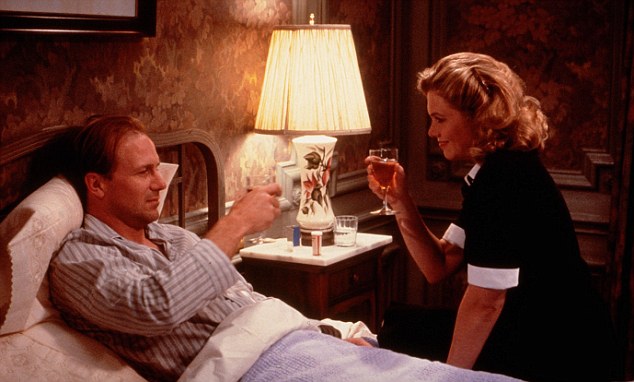 William Hurt plays Macon to a rigid degree. His life is thrown into disarray when his wife Sarah, played brilliantly by Kathleen Turner, tells Macon she’s done with their marriage, suggesting he move out. After a leg breaking incident, Macon packs up the life he knows and moves back to the life he tried to forget in his childhood home.

Dogs will be dogs. And Macon’s dog is brought into an animal hospital upon his return home. There he meets Geena Davis’s character Muriel Pritchett. She’s something the accidental tourist might avoid but Macon can’t help but be drawn to. Upon their first meeting she suggests he call her if he wants help training his dog or, you know, just to talk. Macon is put off. Who calls just to talk? He tries to shake this eccentric woman, but slowly they become friends under the guise of dog training sessions. Suddenly, everything that Macon would normally avoid becomes something he wants to face head on. Muriel shows Macon that the best parts of the journey are the accidents that occur along the way.

Based on Anne Tyler’s 1985 novel of the same name, The Accidental Tourist was adapted for the big screen by screenwriters Frank Galati and writer-director Lawrence Kasdan. Star Wars fans know Kasdan well. He co-wrote not only Raiders of the Lost Ark but The Empire Strikes Back and Return of the Jedi. He recently penned Star Wars: The Force Awakens and is currently co-writing (with his son Jon ) the unnamed Han Solo spin off. A long list of credits, Kasdan also won Academy Awards for writing The Big Chill and Grand Canyon (both of which he directed). Kasdan’s ability to write goes hand in hand with his talent for directing and producing. A triple threat, The Accidental Tourist is even more proof of Kasdan’s quasi-talent.

Throughout The Accidental Tourist the viewer is constantly changing their opinion of Macon. He’s not initially likable as a man unwilling to compromise. Through the course of the film you almost fall for Macon, all while falling hopelessly in love with Geena Davis’s Muriel. The film boasts an incredible cast, including Bill Pullman and Ed Begley Jr., that give their all in and help outline a family deeply toxic and rooted in their ways.

The script is brilliant, with dialogue that’s authentic, reflecting charismatic characters. The newly released blu-ray boasts special features that include an introduction from director Kasdan and scene specific commentary by Geena Davis.

The Accidental Tourist is a film for a perfect night in. Curl up and find yourself accidentally falling in love with this award winning picture, now available from the Warner Archive collection.