If there’s a particular genre film fans are obsessed with, Film Noir is right up there at the top. I can attest to that in my stage life as an Improv performer, Film Noir is one of the most popular ones with audiences. Rare does a show go by where we ask for a genre and someone doesn’t say “Film Noir.” If I asked you to name a defining Noir, what would you say? For some Double Indemnity may come to mind, for others it may be Out of The Past or Murder, My Sweet. But one film that definitely stands as a high hallmark of the genre is 1947’s Kiss of Death.

Directed by Henry Hathaway, with a screenplay by Ben Hecht and Charles Lederer, Kiss of Death stars Victor Mature as Nick Bianco, a down on his luck ex-con who is about to heist a jewelry store on Christmas Eve. As Nick tries to flee, he’s shot. Nick is a family man with two kids, Assistant District Attorney D’Angleo (Brian Donlevy) uses this as he tries to convince Nick to cop a plea deal. 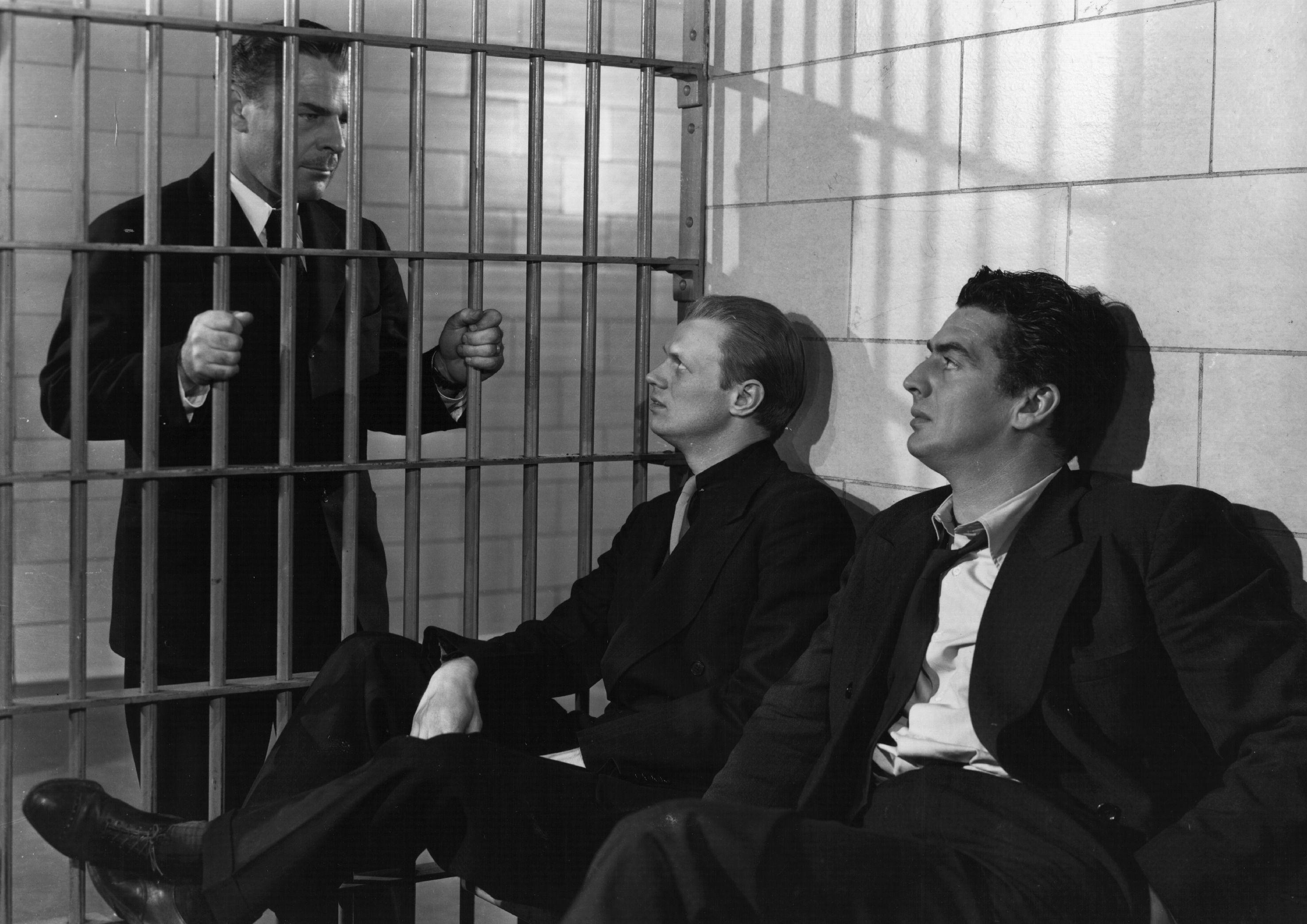 Nick, convinced his lawyer can get him off, refuses and winds up with a 20 year sentence. Three years pass, Nick learns that his wife, due to financial strain, has killed herself and their children are now in an orphanage. A former babysitter for the family comes to visit Nick to see how he’s doing, and to tell him that his wife was assaulted by Pete Rizzo, one of his accomplices. An act that helped push her towards suicide. Nick then calls up D’Angelo to cash in on his “insurance policy” of squealing to get a lighter sentence.

Because three years have passed, D’Angelo can’t offer Nick the same deal he could had before. Instead, D’Angelo comes up with a plan that involves Nick coughing up for a crime he didn’t get caught for, using his “confession” as a way to weed his accomplices out into the open. All this in trade for Nick to squeal for parole and the chance to see his children. Nick tells about his new “charge” to his lawyer, telling him he thinks Rizzo is the one who “squealed” on him.

The lawyer, however, phones up one of the most terrifying and evil villains to ever grace the silver screen, Tommy Udo. A psychotic killer who served time with Nick once before, Udo is played by Richard Widmark–his first film, and holy shit, what a hell of a debut performance this is. Udo goes to see Rizzo to kill him for squealing. What he finds is that Rizzo has skipped town and his wheelchair bound mother is there, alone. 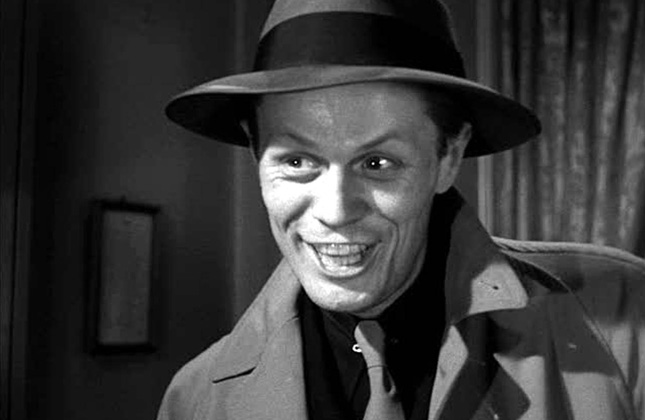 What happens next is shocking now and it must have been explosive then. You’ll have to see the film to find out, but let’s just say that before too long, Nick finds himself in Udo’s crosshairs–who not only has his eyes on Nick, but on Nick’s family. An absolutely fantastic and incredible film from early in the Noir cycle, Kiss of Death is Noir par excellence. Mature gives one of his best performances, and Richard Widmark is astonishing as a character made of pure evil.

What makes Tommy Udo so terrifying compared to other big screen baddies is that he seems so real. It’s not implausible at all that Udo could be the kind of unsavory character stalking the darkened, seedy NYC streets.

Director Henry Hathaway shoots Kiss of Death in a docu-style,making it a logical predecessor to Hathaway’s classic procedural Call Northside 777 a year later. The beautiful black and white was lensed by cinematographer Norbert Brodine, who also shot Of Mice and Men.

Twilight Time brings Kiss of Death into HD with great gusto. The 1080p 1.33:1 image is beautiful. The silvery black and white shines, the darks are rich and deep. It looks as Noir as all get out, and there’s barely a hint of scratch anywhere to be found. Sound options are DTS-HD MA tracks, one as a 2.0 track, the other a 1.0 track. I honestly couldn’t tell much of a difference between the two.

The 2.0–to my ears–appears to be a stereo mix of some kind–there is a great depth to it, but I’m not sure what the source for the mix would be. No qualms here, both tracks sound great. Bonus features include an isolated music track, the original trailers, and two audio commentaries. One with historians Julie Kirgo and Nick Redman, the other with James Ursini and Alain Silver. Both are good tracks, lively, and informative.

Kiss of Death is an amazing film, a defining Film Noir, with a fantastic cast and a performance by Richard Widmark that’s one for the ages. Twilight Time’s new blu-ray is fantastic, beautiful, and a must own for any film fan.