Unscrewing the Screwball: What comes to mind when we think of Great Depression-era Hollywood escapism? Chorus lines of Busby Berkeley showgirls? Fred Astaire and Ginger Rogers? Rough and tumble Warner Bros gangster flicks? All good answers, but these don’t give the complete picture of the fantasies 1930s America thrived on. They exclude one of the most ubiquitous genres of the era, the marriage comedy. There must have been something comforting to factory workers filling the breadlines to witness worlds populated by the rich well-to-do whose problems didn’t go any farther than their spouses. Ah! To have the time and financial security to fetter away the hours scheming to get even with an unfaithful husband or wife! 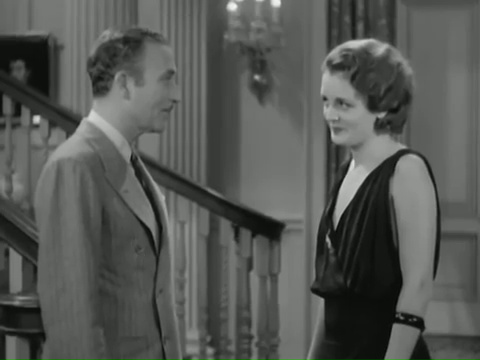 These marriage comedies helped give birth to the screwball comedy, that celebrated (and commonly misunderstood) genre specific to the classic Hollywood studio system. Reveling in inversions of power, both sexual and economic, they held a microscope up to American society in ways more serious genres couldn’t. But what distinguished regular romantic comedies from screwballs? The answer can be found in two films recently released on DVD by the Warner Archive Collection, Gregory La Cava’s Smart Woman (1931) and William A. Seiter’s The Richest Girl in the World (1934). Both feature wealthy socialites who concoct schemes to win back unfaithful spouses. Though fluffy and anodyne, the differences between the two films are startling and a crucial glimpse into the evolution of Hollywood cinema. 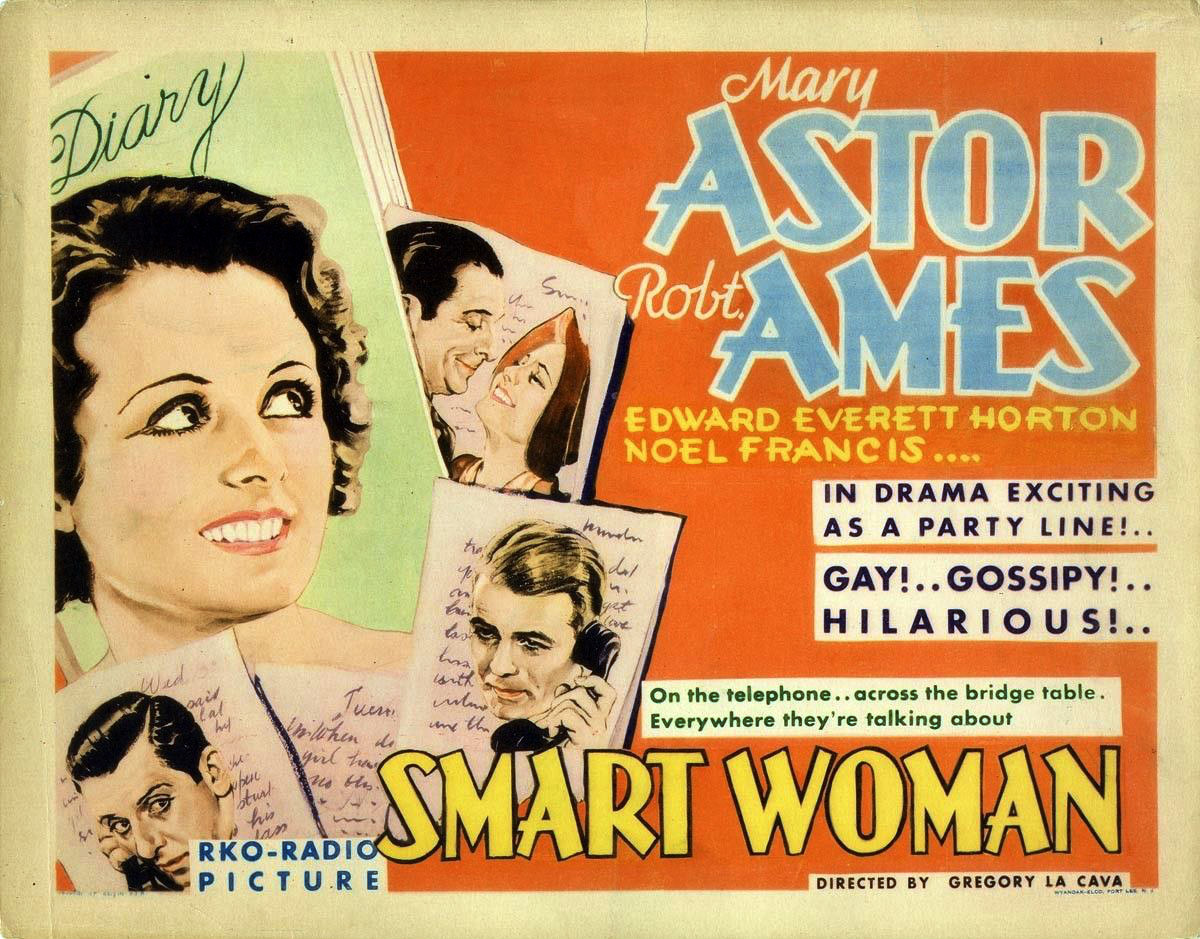 Smart Woman opens with Nancy Gibson (Mary Astor) returning to the States from a trip abroad to visit her ailing mother in Paris. When she gets home, she discovers her husband Donald (Robert Ames) has fallen in love with a flighty beauty queen named Peggy Preston (Noel Francis). Not just that, he begs Nancy for a divorce so they can get married. Determined to keep her man, Nancy invites Peggy and her imperious mother Mrs. Preston (Gladys Gale) to join them over the weekend so they can hammer things out. Unbeknownst to them, she also invites a British man she met on the return voyage named Guy Harrington (John Halliday). She convinces Guy to pretend to be her own lover, hoping to make Donald jealous. Though it initially works, the plan hits a few snags. First, after winning Donald back, Nancy finds that Guy has genuinely fallen for her. Second, and perhaps most importantly, Guy is really SIR Guy Harrington, the richest bachelor in Britain. 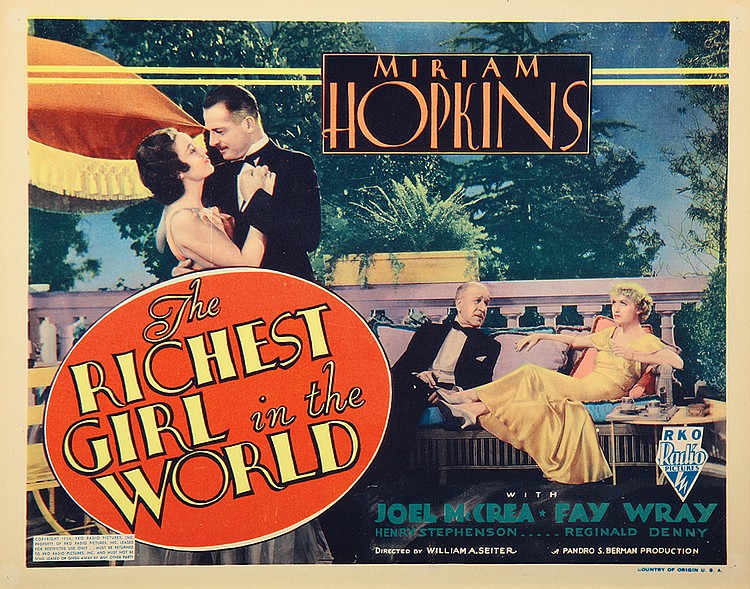 Compare this to the scheme dreamed up by Dorothy Hunter (Miriam Hopkins), the eponymous heiress in Seiter’s The Richest Girl in the World. After being orphaned at two years old onboard the Titanic, Dorothy was adopted and raised by John Connors (Henry Stephenson), a ludicrously wealthy businessman who also lost his wife in the disaster. The heartbroken tycoon zealously protected Dorothy’s privacy to the point where her only known photograph is as a baby. On the rare occasions where she’s forced to meet with John’s lawyers, Dorothy has her close friend and secretary Sylvia Lockwood (Fay Wray) impersonate her. However, after a playboy boyfriend breaks up with her because of her intimidating wealth, Dorothy curses her affluence and embarks to see if she can get a man to fall in love with her for herself, despite her money. When she meets the charming Tony Travers (Joel McCrea), she convinces Sylvia to impersonate her once again and pretend to woo him at the same time she does. Who will win the man? The “heiress” or the “secretary?” 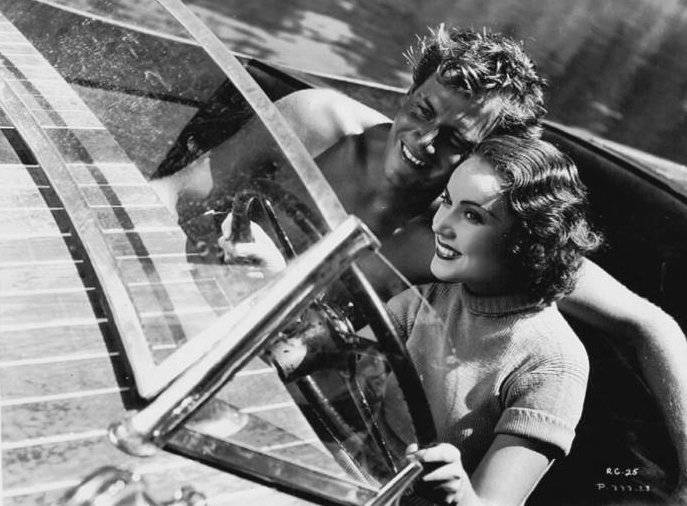 One of the first things you notice about Smart Woman is that it explicitly involves the topic of adultery, something the Hollywood Production Code would explicitly ban in just a few years. And though in a sensible world the onus of guilt would fall on the cheating husband, the film suggests that Donald’s philandering is Nancy’s fault. When she first learns of his infidelities, Donald’s business partner Billy Ross patiently explains: “A wife should stick to her husband. If she doesn’t, some other woman will.” As the “guilty party,” it’s her responsibility to win her husband back. On the other hand, everybody tries to talk Dorothy out of her preposterous plan; her fears and insecurities are the only thing propelling it forward. However skewed, this does presuppose a certain amount of agency on Dorothy’s part, an agency that would come to define the headstrong women of the screwball comedy genre. Screwball heroines were many things: actresses (Twentieth Century [1934]), reporters (His Girl Friday [1940]), bubble-headed heiresses (Bringing Up Baby[1938]). But shirking flowers they were not. They were headstrong, impulsive, and willful, usually to juxtapose their romantic counterparts, effete, nervous, and confoundable men. Dorothy’s impetuousness matches these ladies to a “T.” 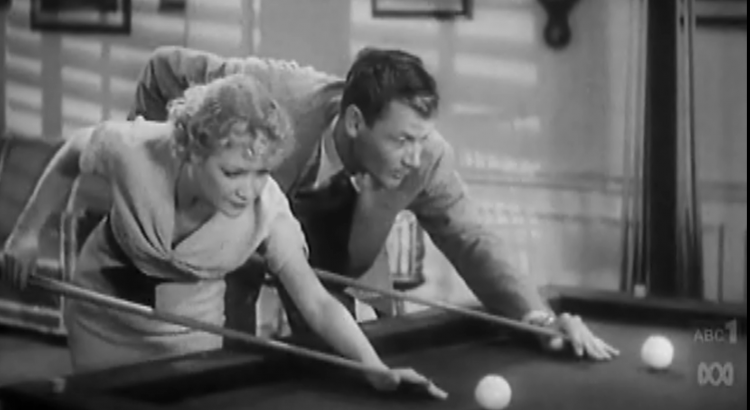 But perhaps the biggest difference between the two films, and arguably the most significant in terms of the development of the screwball genre, is the absence of sexual/economic burlesque in Smart Woman and its centrality to The Richest Girl in the World. The co-mingling of classes was integral to the screwball comedy since its beginning. Usually these involved members of different social classes falling in love (It Happened One Night (1934)), the poor impersonating the wealthy (The Lady Eve (1941)), the wealthy forced to slum it among the poor (My Man Godfrey (1936)), later directed by none other than La Cava). But Nancy never pretends to be poor or destitute. And though one could argue the sudden revelation of Sir Guy’s wealth might qualify as a screwball twist, Sir Guy never pretends to be needy. There’s never any pretense of poverty. But The Richest Girl in the World revolves around Nancy and Sylvia’s economic deceptions.

La Cava and Seiter would go on to direct better films while Astor and Hopkins would become immortalized in classics from other genres, the former in the noir masterpiece The Maltese Falcon (1941), the latter for her Academy Award-nominated turn in the historical drama Becky Sharp (1935). But these two films see these artists undergoing a metamorphosis alongside the rest of Hollywood, one that would leave an indelible mark on world cinema.