I grew up in a rodeo town of sorts. Every year for ten days, it seems everyone gets out the one pair of cowboy boots and ten gallon hat they never wear outside of the event and go hog-wild for all things horse and bull. While it’s a huge boon to our local economy, I’ve only ever gone to the actual event one time; I found it to be dull, and in my later years, have come to despise the animal exploitation such a thing entails. Outside of the carnival (and with that, the carnival food) that comes to town along with it, I generally tend to steer clear of it.

The above factors made me drag my feet when it came time to watch The Lusty Men, which wasn’t helped by the fact that it may just have one of the most misleading titles of all time. The original poster, used as the cover art for the release from the Warner Archive Collection, is also deceptive; it makes it look as though it is a story of sizzling, romantic passion with maybe some rodeo action in the background. While it does have moments of romance and drama, the film is less about the lust for a woman and more for the lust of fame and glory.

Robert Mitchum plays Jeff McCloud, a washed up rodeo star who happens to meet ranch hand Wes Merritt (Arthur Kennedy) and his wife, Louise (Susan Hayward). This is a stroke of luck for Wes, who wants to buy a ranch with Louise. He thinks the best way to come up with the money is to enter the rodeo circuit, so he hires Jeff as a manager. Despite the protestations of his wife, who thinks it is both foolish to leave their lives behind and could prove to be potentially fatal for Wes, the trio soon set out traveling across the country and entering different competitions. 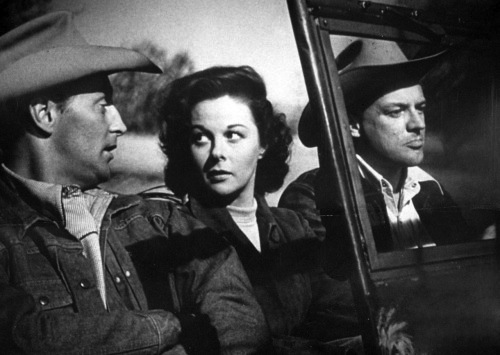 Wes becomes addicted to the money and recognition he gains, while Louise and eventually Jeff begin to fear not only for his safety, but also his sanity. You see, Wes has started drinking hard and hanging around with a “buckle bunny” (slang for a rodeo groupie – yes, it’s really a thing) named Babs (Eleanor Todd). More drama ensues when Jeff realizes he has fallen in love with Louise and decides to go out for one last ride after having been challenged by Wes.

Honestly, this is one of the more engaging films I’ve had the pleasure of viewing in quite some time. Using real rodeo footage shot by director Nicholas Ray (Rebel Without a Cause) that gives it a semi-documentary feel, the action scenes are a sight to behold and actually drew me in, despite my previously stated disinterest in the sport. They make the viewer feel as though they are right in the thick of it. One feels the danger, excitement, and terror that comes along with being a rodeo rider.

The film also gives a sobering behind-the-scenes look at the life of people involved in the rodeo circuit. The perils one can face are put front and center, and the movie never skirts around the injuries and personal toll a life like this entails. There are quite a few scenes of people describing and showing off the many scars and injuries they’ve sustained from years of doing this. It also shows how death can be a real threat, how personal relationships can be badly damaged, and how a lot of self-medicating by use of alcohol goes on.

The acting by the three leads is stellar, particularly Hayward as Louise, the concerned wife and centerpiece of the film’s love triangle. On loan to RKO from 20th Century Fox at quite a hefty price, the filmmakers received far more than what they paid for. While she apparently initially took much issue with the role, as it was practically non-existent in the original script, it was expanded upon once she agreed to do the film. All of this drama perhaps added to her fiery performance – she doesn’t sit idly by watching her husband try to ruin his life. Instead, she voices her concerns loudly and fiercely, and even gets into a physical altercation with Babs at one point. Hayward’s performance and the rodeo sequences are the true stars of this film and make it worth giving it a look.