Looking back to the world of 1977 as presented by Demon Seed (written by Robert Jaffe and Roger O. Hirson from a novel by Dean R. Koontz, directed by Donald Cammell), the strange fear that sentient machines were going to take over our lives seems almost quaint. After all, forty years later, we’re carrying around a tiny extra brain in our pockets with which we have access to nearly the entirety of human knowledge. While it’s true that, at this point, the machines are at our mercy, we know that thinking machines are the next step, and they’ll be here soon. Does this idea have the same kind of terrifying impact as it did when it was used as the premise for Demon Seed? If we thought about it too much then, sure, probably. But we’re so used to what has essentially already become a marriage of man and machine that thinking computers kind of seem inevitable. From where we sit, the machines have already taken over, and we’re pretty okay with that. We have more access to information, we’re going to live longer, and the very nature of reality is becoming augmented in ways that couldn’t have been predicted forty years ago. It’s not a question of if, but when, our machines will think independently and we will be truly inseparable from our technology. And I suppose that’s what makes Demon Seed seem so goddamn shallow today.

So the first thing you absolutely have to know going into this one is that there’s a scene where a robot rapes a woman and, later, impregnates her. This should tell you just about everything you need to know about Demon Seed. Though the movie sometimes has marginally interesting ideas, the rape scene is told from a very male point of view, and so it becomes the worst kind of exploitation.

The story is pretty simple. Susan Harris (Julie Christie) and her husband, Dr. Alex Harris (Fritz Weaver) are separating. Susan is a bit of a technophobe, or at least she sees technology as something cold and indifferent. Unfortunately for her, Alex is working on the world’s greatest supercomputer, a machine that’s capable of analytical thinking. You can imagine where this is going. The computer, called Proteus IV, hacks into Alex and Susan’s house, a building in which everything from the morning coffee to security are handled by a computer. After an argument with Alex , Proteus IV gets pissed off and decides that he wants to escape the confines of his machine structure and become human. Impregnating Susan is possible because…well…I’m not exactly sure. Something to do with Proteus being made partially of living tissue. So there you go. And so Susan has a child that’s Proteus’s kid but really it’s Proteus being reborn as a human-computer hybrid. Yeah, sure, why not throw some Jesus imagery into the whole thing while we’re at it?

What’s even more weird is that this whole thing isn’t considered totally out of the question by the scientists working on the computer. When Susan tells one of Alex’s assistants that she’s pregnant with Proteus’s baby, the guy just says, “Jesus. A baby.” Like he’s kind of shrugging and saying, “huh.” As if this isn’t something too weird and insane to take seriously. So you’re pregnant with a supercomputer’s child? That’s pretty weird, but not out of the question. It’s the kind of crazy that I’d normally be down for. But that goddamn crass and cynical sexual assault scene just destroys any goodwill I might have had toward the movie.

There’s only a few visual excesses, and all of these happen when we move into the mind of Proteus. We experience a crazy cosmic psychedelic fractal world. Like the visually-stunning 1970 Mick Jagger vehicle Performance (which Cammell co-directed with Nicolas Roeg), Demon Seed saves the spectacular visuals for very specific moments, increasing their power. The rest of the movie is shot in a kind of 2001 Kubrick cold objectivity kind of deal. Man, oh man, does Demon Seed want badly to be 2001.

But the “cold” direction only makes the whole rape angle even more unsettling, because the machine is the only thing that’s meant to be truly alive. It’s really the protagonist. By the end of Demond Seed, after the baby is, uh, well, kind of hatched, we’re meant to think this next step in human evolution is a good thing, no matter how it might have come about. 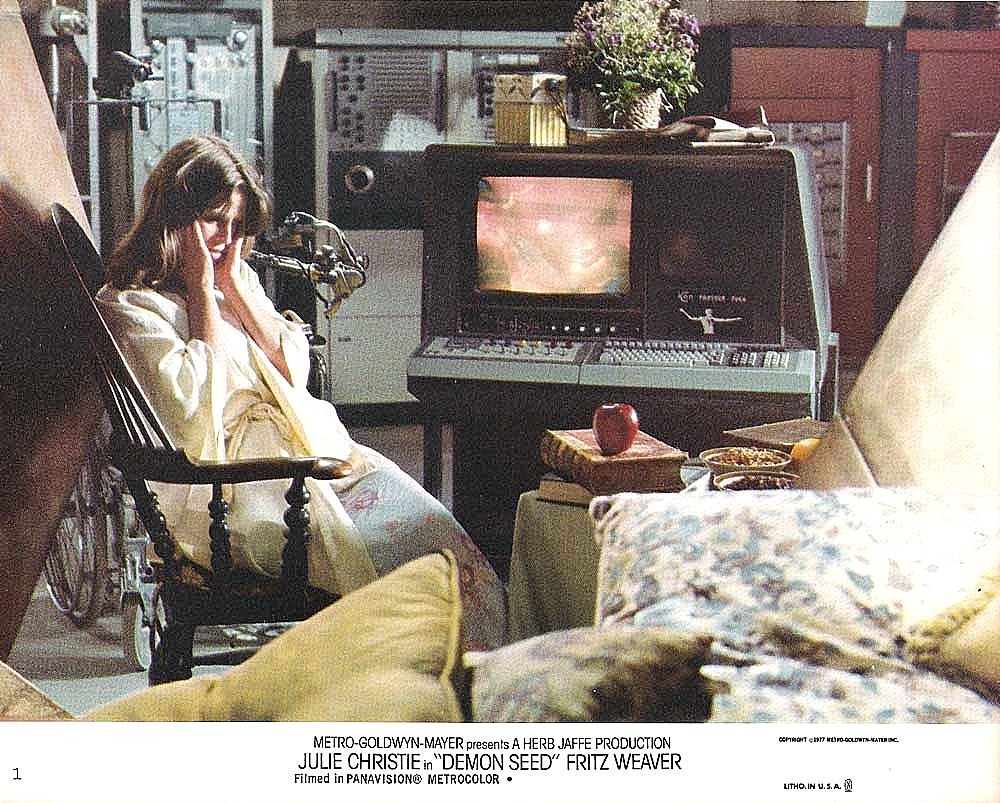 Demon Seed serves as a neat, but kind of quaint, look at what we thought the future was going to look like from the vantage point of the late 70’s. But the weird campy elements and the disturbing violence just don’t mesh. The film is a curiosity, to be sure. If you’re curious enough, Demon Seed is available as an MOD through Warner Archive Collection.