Life is hard for Iris King and Stanley Cox, and all they want to do is help each other. They work in a crime ridden area of Connecticut, and are employed at at a bakery trying to make ends meet. Both have faced the struggles and hardships of life. They need help and they need one another.

Directed by the late, great Martin Ritt, who achieved critical acclaim with such films as Hud (1963) , The Long Hot Summer (1958) and Norma Rae (1979), Stanley and Iris (1990) does not reach the pinnacle of  Ritt’s work with Paul Newman like Hombre (1967) or Paris Blues (1961), but it still holds sway over the viewer, in no small part due to the director’s far-reaching abilities and the pure watchability of its leads.

Robert De Niro and Jane Fonda play star crossed lovers Stanley and Iris. De Niro does a convincing job as the hard-working blue collar man who  just doesn’t want anyone to fuss over him. He meets Iris as her purse is snatched on the bus. Stanley rushes to her aid, and their friendship blossoms through a series of unfortunate events. Iris tries to return Stanley’s favor by offering to help him learn. She pushes him further than he has ever gone; motivating him and giving him challenges, ultimately helping him find his voice. But Iris comes to find that Stanley has taught her far more. She learns to love again after facing the death of her late husband. She and Stanley have their ups and downs, with Stanley finding it hard to overcome his pride. But they work harder, push more and use one another to overcome the obstacles that have been blocking their way for years.

Stanley and Iris has all the bells and whistles of a potentially award winning film. John Williams created the score, and Cinematographer Donald McAlpine, who’s credits include Baz Luhrmann’s Romeo + Juliet (1996) and Moulin Rouge! (2001), creates great visuals of the grit that surround the characters.

Sadly, the film was a box-office flop. Audiences found it hard to accept Fonda and DeNiro as such down and outers. Even strong performances from co-stars Swoosie Kurtz, Martha Plimpton and Loretta Devine couldn’t save the box office numbers. 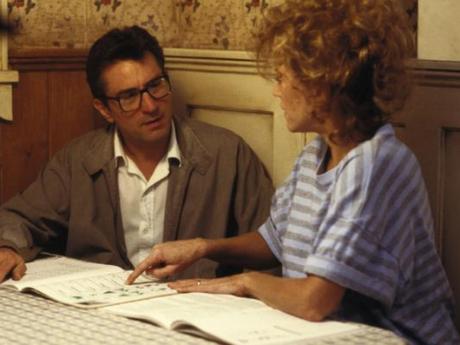 Even with Martin Ritt directing, there’s just no chemistry between the leads, although their performances are worth watching. Great actors can still drive a bad car at times.

Stanley and Iris is a staple in the catalogue of Jane Fonda and Robert De Niro. It’s available now on Blu Ray and DVD from Twilight Time.