A fictionalized telling of a real historical event, Howard Hawks’ Air Force (1943) follows an unarmed Boeing B-17 Flying Fortress named the Mary-Ann that unknowingly enters the Japanese attack on Pearl Harbor on December 7, 1941. Harangued by Japanese fighters, the crew jumps from port to port, desperate to find an airstrip not under fire so they can refuel and regroup. During a grueling three days and nights with no sleep, they fight in several skirmishes both on the ground and in the air before participating in a large naval operation against the Japanese modeled after the Battle of Coral Sea.

The first half of the film is the most distinctly Hawksian. Shot almost entirely in the claustrophobic environment of the B-17’s fuselage, Air Force uses silence to meditate on the crew struggling to make sense of the hell unfolding on the ground below as their disparate personalities bounce off one another. Here we get a glimpse of Hawks’ beloved community of isolated and consummate professionals. But since Air Force was produced as propaganda, the characters lose much of their Hawksian depth and uniqueness in favor of more standard archetypes. These include the no-nonsense officer, the highly competent yet addle-brained dope, and the troublemaking outsider who comes through in the end. They even have an adorable mascot: a scruffy-looking dog they pick up on Wake Island.

The second half favors whiz-bang action sequences over the first half’s measured character development. Though grand in scale and execution, these sequences pose difficult viewing today for their abject cruelty towards the Japanese. During a tense escape from an airfield in the Philippines, one of the Mary-Ann’s crew-members gets strafed by a Japanese Zero. When the Zero gets shot down, we see the Japanese pilot gruesomely flail about in the fiery wreckage before getting savagely executed by Hollywood tough guy John Garfield. The Coral Sea climax may be expertly cut and visceral, but there are one too many shots of helpless Japanese sailors on half-sunken boats getting blown to smithereens to truly enjoy it. The film takes a near pornographic pleasure in seeing these Japanese troops getting killed. This isn’t just a war film, it’s an act of cinematic retribution; a celluloid revenge fantasy. The film justifies this cruelty by dehumanizing the Japanese as amoral monsters. More than once the characters grimace and growl about how the “Japs” or the “Nips” don’t fight fair—if they could just draw the Japanese into a fair fight where they couldn’t cheat, the Americans would “wipe them out.” What’s more, the film makes several claims about Japanese-American sabotage that time has since disproven.  The most egregious being that native Hawaiian colluders clipped the tails off parked fighter planes with vegetable trucks during the attack on Pearl Harbor. 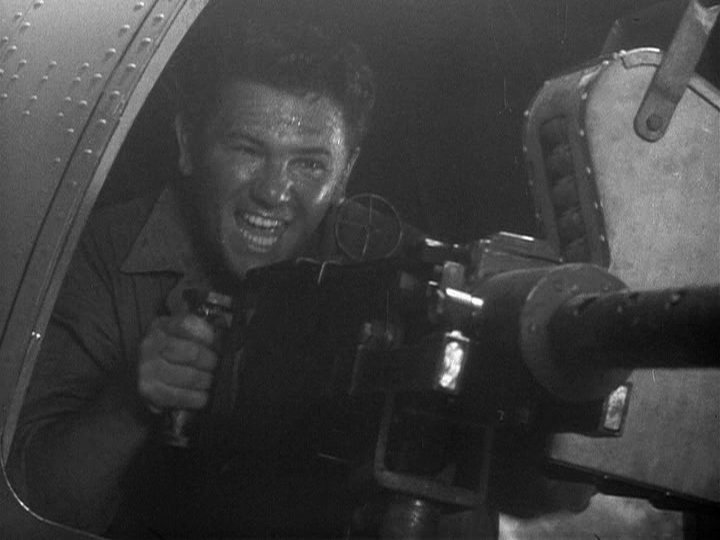 From a technical standpoint, Air Force is an impressive piece of cinematic craftsmanship, especially considering its harried production schedule. Intended to premiere on the one-year anniversary of the attack on Pearl Harbor (it missed that date by two months), it was rushed into production without a finished script. Production was so chaotic that Hawks was temporarily relieved of directorial duty after a nasty spat with producer Hall Wallis. To get the film completed, Hawks brought in none other than William Faulkner to punch up the script, entirely rewriting two scenes. It’s a testament both to Hawks’ skills as a filmmaker and the centralized might of the Hollywood studio system that Air Force managed to be both coherent and sporadically moving. (The one flaw I could notice was that the indoor nighttime cinematography in the first half of the film was occasionally too dark—celebrated critic/stick-in-the-mud James Agee described it as the “gummiest sort of ‘Rembrandt’ sentimentalities.” But considering that the film was lensed by legendary James Wong Howe, I’m going to give it the benefit of the doubt and assign my complaint to the care of the film’s DVD transfer.)

None of the features on the Warner Archive release are really that good (the film is available on MOD DVD through Warner Archive Collection). The main feature, Hawks’ first to explicitly deal with World War Two, was lauded at its original release as an instant classic of Hollywood filmmaking, winning an Academy Award for Best Film Editing and popping up on a number of critics’ end of the year “Best Of” lists. 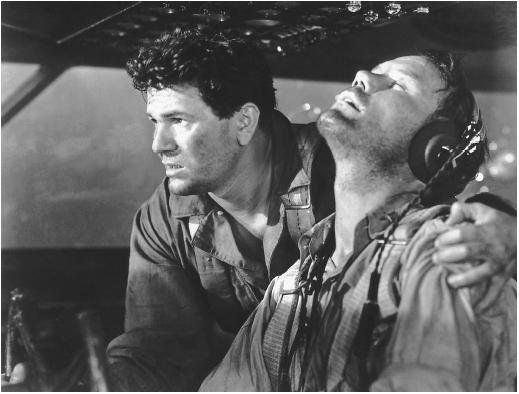 But today Air Force comes across as stilted, unapologetically jingoistic propaganda. The featured documentary short, Jean Negulesco’s Women at War (1943), loses much of its power as an examination of the Women’s Army Corps (WACs) by constantly patronizing its subjects as either too flighty, too clumsy, or too emotionally unfit for active duty. And the two cartoons—Friz Freleng’s The Fifth-Column Mouse and Frank Tashlin’s Scrap Happy Daffy—are largely forgettable thanks to mediocre animation and ludicrous gung-ho patriotism. Yet as a time capsule of an entertainment industry reinventing itself for wartime, it is invaluable both to history scholars and film buffs.

In the end, Air Force can’t escape the shadow of its own jingoism. Its point wasn’t just to inspire an American public but to make monsters of its enemies. It did so with chilling efficiency. That is why we must remember and study Air Force: so as to never allow ourselves to go down the same xenophobic path again.