Directed and co-written by Colin Higgins, the writer behind Hal Ashby’s Harold and Maude, 9 to 5 is a cult comedy in which the political edges are dulled by a cartoonish plot. However, it might be that very cartoonishness that makes it palatable for a mass audience and a cult classic. The movie has recently been re-released as a limited edition Blu-ray from Twilight Time.

Based on an idea by Jane Fonda as a drama for her production company, the research was done by Patricia Resnick, who also wrote the first version of the script, which had by then morphed into a dark comedy with dramatic elements. In a 2015 Rolling Stone interview, Resnick lamented the changes Higgins made to the screenplay (the lighter, cartoonish tone came about during his rewrites) remembering, “When I went to the first screening, I felt like I had a kid, and the kid was sent off to military school and came back two years later, and I was squinting and going, ‘I guess it’s kind of my kid.’ It was really very painful, but that’s, unfortunately, how it goes with writers in features…”

This was Dolly Parton’s first film role. She’s wonderful, a natural, playing Doralee Rhodes, basically a middle-class version of Dolly herself – and who doesn’t love Dolly Parton? Someone without a soul, that’s who. My first memory of Dolly Parton was during a 1987 episode of her short-lived variety show. She married Hulk Hogan in a dream sequence and I thought for a while that they were actually married. I remember my mom rented Steel Magnolias on VHS several times. So I’ve always thought of Dolly as an actor. 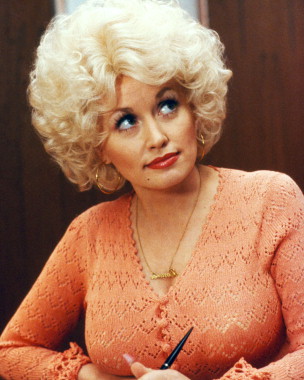 Dolly’s Dora Lee is the most genuine, kind-hearted employee in the office, but somewhat mistrusted by the other women because she’s a beautiful, buxom Southern belle, where as a secretary working directly under her despised, sexist boss Franklin Hart (Dabney Coleman). Everyone suspects her of having an affair with Hart — which she’s not — but that doesn’t stop Hart from trying to get his hairy paws on her. Even though Dolly is playing an exaggerated, “southern-fried” version of herself, it’s obvious she’s working hard to create a very strong character who does what she has to in order to keep a job, stopping short of taking shit.

Jane Fonda plays against type as Judy Bernly, a recent divorcee in her early 40’s entering the workplace for the first time. Fonda’s Judy is a very shy, naive, emotionally beaten-down character who’s still wrapped around her ex-husband’s finger even after he had an affair with his secretary. I mean, this is freakin’ Barbarella! Her demur attitude changes, of course, and we see what we’ve come to think of as the “real” Fonda emerge: the strong, beautiful woman who finally puts her ex-husband in his place. In fact, Fonda plays the part so expertly that we’re taken aback a little when she finally tells her ex off. 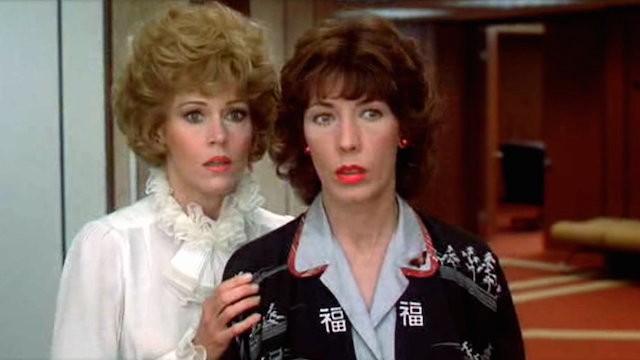 And then there’s Lily Tomlin. Naturally, she does a fantastic job playing Violet Newstead, a woman with a tough exterior who is perhaps the most fragile of the three. She’s a widow with three children who works her ass off, watching as men constantly leapfrog past her to management positions. She does well enough playing the game, but is quicker than the other two  in letting her temper out.

Man, what great protagonists the three are! It’s impossible not to like them, especially after they get over their petty differences and unite to give their boss all he has coming.  And it’s hard to imagine a better heel in this role than Dabney Coleman. Franklin Hart is a shallow misogynist, unaware of his immense privilege and general incompetence. But the great thing about Hart and the way Coleman portrays him is that he’s such a nonthreatening klutz that he borders on the  ironic. All three of the women initially get to have their personal fantasies of how they would deal with Hart had they the wherewithal; Dolly’s is all about reverse sexual-harassment, imagining herself as the boss and Hart as her secretary. His faux-masculine character is now a trembling, vulnerable “victim,” delivering one of the funniest lines in the movie as he tries to resist Dolly’s charms: “Mrs. Rhodes, I told you I’m not that kind of boy.” 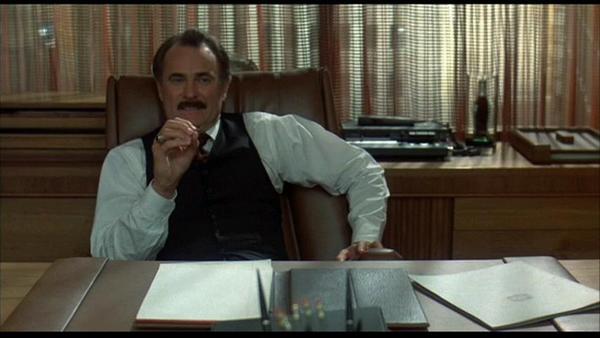 Though 9 to 5’s pace turns frenetic toward the middle, we’re somewhat eased into this more cartoonish style, contrary to the first act’s restraint. In fact, the first indication that things will soon go over the top in a wonderfully 80’s kind of way happens when Judy is tasked with copying some documents and the copy machine goes mad, spitting out paper willy-nilly and filling the room with reams as Fonda scrambles around trying to collect the errant documents. The scene is hilarious and a kind of nightmare scenario that most of us have had at one time or another about being a newbie on the first day of work and embarrassing ourselves. Later, smoking a joint and commiserating with each other at Doralee’s place, the women exchange over-the-top revenge scenarios in which each of them humiliate or, in Violet’s case, kill Hart. Each scenario is a self-contained comedy sketch. And since they’re fantasies, Higgins can get as cartoony and over-the-top as he wants with the story and direction, signaling that this won’t be your average workplace comedy. Things are going to get real weird real fast. The women steal a body, crash a car, and kidnap Hart, tying him up in leather restraints that make him look like a white-collar kinkster.

Kind of neat that the fantasy sequences all come true in some way. Fonda, in a sort of nod to her expected persona is imagined to be a shotgun-wielding hunter looking to kill Hart and probably mount his head on her wall. Later, she’ll actually shoot at the guy with Doralee’s gun. And after Hart is kidnapped and held prisoner in his own home, Dolly gets a little sexual harassment of her own, telling Hart to be a “good boy” as he stands helplessly in his weird leather restraints. And Tomlin, who fantasizes about poisoning the schmuck accidentally puts rat poison in his coffee, leading to the funniest sequence in the movie. Before Hart can take a sip of the tainted coffee, he falls out of his chair and knocks himself and is rushed to the hospital just in time for Tomlin to realize her mistake.

Despite, or perhaps because of the more “fantasy-driven” elements of the film, it’s an illuminating view of office politics and the gender inequalities from the ’80s. There’s a secret word at the heart of the film that’s only mentioned once, maybe twice, and that word is, of course, “union.” The treatment of the female office workers in 9 to 5 is illustrative of what happens when one side has all the negotiating power in the fight between labor and management for better treatment, working conditions and pay. This makes 9 to 5 an interesting relic of the free market 80’s and worth watching more than once, especially if you love a good belly laugh.

Following the success of The Player (1992), which was widely regarded as a return to form for director Robert Altman (even though eclecticism is often what defined the best of his work), Short Cuts seemed […]