It took me a second to figure out the connecting threads between the movies in the Hollywood Legends of Horror collection, recently released through Warner Archive, and it’s kind of cool. They’re all pre-code low budget flicks from the 30’s. As you might expect from a compilation of six films, it’s a mixed bag. Some are great, others okay, one tries your patience and the final is just plain over-the-top racist . You really have to dig this kind of thing to make it through all of these movies. I like this kind of stuff, and although it was hard for me to slog all the way through, it was worth it.

The first film in the set is Doctor X. Directed by Michael Curtiz, who would go on to to helm a little movie called Casablanca, it features original scream queen Fay Wray of King Kong fame. It also features accusations of cannibalism. Definitely pre-code there. The movie was shot in two-color technicolor, which was afterward abandoned by First National Pictures since their low-budget horror films just didn’t warrant it.

The plot consists of a host of doctors at a prominent “university,” one of whom is most probably a cannibal. Each doctor is more eccentric than the next, so everyone’s something of a suspect.

Doctor X is a great example of the mad scientist horror trope that was so prevalent in the first half of the 20th Century. It’s a lot of fun with plenty of low-budget effects and even a cool mask that looks like clay which is revealed to be…synthetic human flesh! Gah!

The Return of Doctor X is a sequel in name only, used most probably for marketing purposes. Featuring Humphrey Bogart in his only horror movie appearance, this film’s Doctor X comes complete with a Bride of Frankenstein-style grey streak through his hair. Directed by Vincent Sherman (The Adventures of Don Juan), the movie wears its low-budget credentials on its sleeve. The basic plot consists of a wiley reporter trying to solve the mystery of actress Joan Vance (Rosemary Lane) who has apparently been killed. But wait! She’s alive and well the next day. But she’s wearing black instead of bright colors, so something must be up.

Screenwriter Lee Katz peppers the story with some weird incongruities: A pet monkey, synthetic blood, and strange dialogue, like that of a detective who declares, “We’re gonna play a new game: Body, body, who’s got the body?” The whole idea of synthetic blood that sort of runs out and needs to be replaced is a fun idea, and a new take on the vampire flick. Also, always remember, if you find yourself in a classic mad scientist movie and a guy is wearing a monocle, he’s probably an evil dude and you should stay away.

The next movie, Mark of the Vampire, represents the first of two collaborations between director Tod Browning (Dracula) and actor Lionel Barrymore. A remake of Browning’s unfortunately lost silent film London after Midnight, this version is rather incoherent, especially in the final act. From what I can tell, this isn’t Browning’s fault. Rather, the studio cut a 90 minute film down to just over an hour. Not cool.

Mark of the Vampire stars Bela Lugosi. Poor Bela. Only four years after Dracula and he’s already being typecast. He plays the titular vampire, and he looks almost exactly as he did in Dracula. Same mode of dress, same hair slicked back. The only difference is an inexplicable spot of dried blood on his temple. Weird.

The primitive effects make the flick more lighthearted than scary. Gotta watch out for those scarybats on strings, of course. except, at one point, there’s  a real bat, and it gets shot at. Mark of the Vampire would be more watchable were it not for the incomprehensible ending. As it is, the movie is worth watching for the curiosity factor. 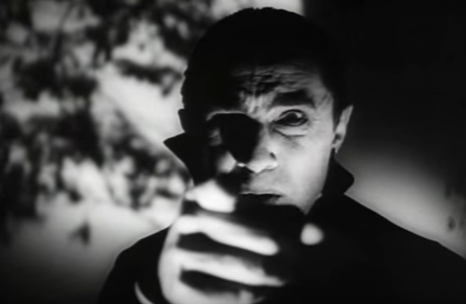 The next movie is rather problematic. I’m glad it’s included, because every digital copy of a movie in circulation is one more chance to keep it from disappearing from history altogether, as so many of our earliest films have.

But let’s just get this out of the way: The Mask of Fu Manchu is racist and wildly outdated. Not even the great Boris Karloff can save this thing from being morally reprehensible in a modern context. When it was released in 1931, The Mask of Fu Manchu was condemned by the Chinese government. And rightly so. Unlike Karloff’s other British-accented Chinese character, Mr. Wong, Fu Manchu comes with thick layers of makeup and an impossible-to-unsee yellowface. Right. So there’s that.

This stuff was very hard to watch, especially when you consider the current U.S. political climate, where race relations aren’t exactly cozy and where white supremacists are crawling out from under rocks. I guess we’re not exactly talking Birth of a Nation (the original D.W. Griffith movie, of course) territory, but the stereotypes are pretty brutal, making it impossible to enjoy The Mask of Fu Manchu’s adventure story. I guess if you want a positive angle, it’s that you get to watch some of the worst Chinese stereotypes and caricatures come to life. It’s a real window into just how fucked up white America really was. Has much changed, or has the racism simply been buried, and become a bit more subtle? At one point, Fu Manchu, no joke, says, “Kill the white man and take his women.” Yeah. Anyway, like I said, I’m glad this movie was included as a historical artifact, but, really, it’s pretty impossible for a person of conscience to enjoy this movie.

At least the next movie, Mad Love, is a nice palate cleanser. Starring the great Peter Lorre in his American film debut and directed by Karl Freund, the movie is the most visually interesting of the bunch. Freund actually moves the camera, which is nice.

Frances Drake stars as the absolutely breathtaking Yvonne Orlac, an actress married to pianist and composer Stephen Orlac (Colin Clive). Drake’s screaming and melodramatic freakouts get a little over the top and the rest of her acting isn’t that great, either. Lorre’s Doctor Gogol (cool name!) is obsessed with Yvonne, to the point where he buys a wax sculpture of her likeness when he learns that she’s leaving the theater to start a family with Stephen. Comically, the wax sculpture is just Frances Drake standing still and trying not to breathe or, presumably, laugh.

Yvonne’s husband is involved in a train accident that destroys his hands. Irony is thick here as Lorre’s Gogol happens to be a brilliant surgeon. He agrees to operate on Stephen so that he can be close to Yvonne. When it’s clear that Stephen’s hands can’t be saved, Gogol grafts new hands onto his arm stumps. Nobody would notice they suddenly have someone else’s hands, right? The bad news for Stephen is that his new hands belong to a murderer that’s just been executed. Worse yet, the hands have a sort of muscle memory and they want to continue to murder by way of throwing knives into people’s backs. Mad Love’s weirdly wonderful script made it my favorite film of the bunch. It’s too bad director Freund never helmed a movie again, instead working exclusively as a cinematographer.

A neat side note: Keye Luke, an actual Chinese man, plays Gogol’s assistant, Doctor Wong. A lot of my fellow 80’s kids will be happy to learn that Luke went on to become the shopkeeper in Gremlins.

The final film of the collection, The Devil Doll is the other Tod Browning / Lionel Barrymore collaboration. Barrymore stars as a cross-dressing escaped convict banker who learns how to shrink people and control them with his mind. Interesting stuff. In theory. Unfortunately, the movie drags. There’s a lot of talking and not enough tiny people. Still, the effects are cool, and though we know all about using screens to achieve these effects nowadays, they must have looked pretty impressive for an audience in the 30’s. The effects still hold up.

Hollywood Legends of Horror really isn’t a collection for the casual horror fan. People who aren’t into the fringe material would be frustrated with the overall uneven quality. However, I very much love that Warner and other studios like Universal are opening up their archives. The idea of any piece of art, however flawed, getting lost to history is a scary thing indeed.

Hollywood Legends of Horror is available as MOD through Warner Archives