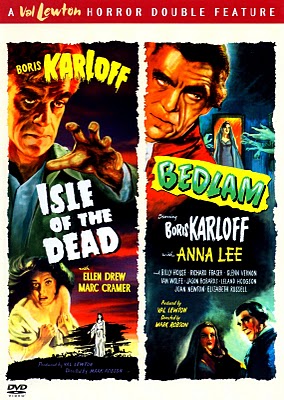 The Isle of the Dead / Bedlam combo DVD released by Warner Archives earlier this year represents a collaboration between three very talented people who would work together on two occasions and then never again. These two films, released in 1945 and 1946 respectivel, starring Boris Karloff represent the kind of quirky collaborations that sometimes come together almost magically in low-budget filmmaking.

Beginning his career as a pulp novelist, Val Lewton was well suited for his role in heading RKO’s newly created horror department, intended to rival Universal’s monster movie division, the standard-bearer for horror in the United States since the release of The Hunchback of Notre Dame in 1923, starring the great Lon Chaney. Eschewing the monsters, which Lewton despised, the RKO horror films would focus on psychology. When one of Universal’s top performers, Boris Karloff, signed a three-picture deal with RKO, Lewton was convinced that the two of them wouldn’t get along, but they ended up becoming good friends. And why not? It’s only business, after all.

Karloff, of course, was a terrific actor who could never escape his pulp trappings and ended up making B-movies after his initial fame playing Frankenstein’s monster and The Mummy. But it wasn’t all bad for the guy. British born Karloff had started off in silent pictures as a bit player which offered meagre money. Literally a hard worker, Karloff performed manual labor in order to supplement his income, resulting in back problems throughout the rest of his career.  After the success of Frankenstein, he got to make movies for a living and at least he wasn’t as typecast quite as terribly as Bela Lugosi, who was forced to play some variation of a vampire or mad scientist for the rest of his career. Though Karloff was a genre movie guy, he wasn’t always a horror movie guy. He took over the lead in the Fu Manchu series from Warner Oland in The Mask of Fu Manchu, which, of course, is a rather embarrassing thing to watch in the 21st Century. Also, he played Mr. Wong in five films, so his rather dubious career of playing Chinese men with British accents is fairly extensive.

The final piece of this triumvirate, director Mark Robson, is best known for melodramas like Peyton Place and Valley of the Dolls. For Isle of the Dead and Bedlam, he kept the camera work fairly restrained, only making his presence known when he needed to pull the camera back to let a scene breathe or move in closer when he needed to create a sense of suffocation.

Written by Ardel Wray, Isle of the Dead features Karloff as General Nikolas Pherides, an eloquent but harsh commander whose strict adherence to order and logic has put him in some morally ambiguous situations, especially as it relates to the treatment of his soldiers and subordinate officers. On a whim, Pherides takes American reporter Oliver Davis (Marc Cramer) to a nearby island where his late wife is interred in a mausoleum. Upon finding her grave empty, the duo find themselves at the mansion of an archaeologist, who explains that bodies throughout the island have been dug up by the peasants on a hunt for artifacts. The archeologist at first sold the artifacts abroad before having an attack of conscience and calling the whole thing off. Pherides doesn’t seem too upset with this development, because he decides to stay the night in the mansion, which is, no doubt, better than sleeping in his tent, which happens to be on the front lines of the Balkan War of 1912.

Though he intends to go back to his soldiers in the morning, the good general’s stay becomes extended when a man dies overnight and a doctor determines that the poor bastard had a form of the plague. The doctor orders the house quarantined, and Pherides is going to make sure this order is enforced.

Along the way, however, an old superstitious lady slowly, very slowly, convinces the otherwise logical general that a young woman, Thea (Ellen Drew), is a vorvolaka, essentially a vampire, and that she’s responsible for the sickness. As he’s consumed by the plague himself, Pherides descends into paranoia, intent on destroying Thea and the curse he’s convinced she’s responsible for.

In this battle between belief and logic, well, logic loses. The archaeologist prays to the old Greek gods, and Pherides scoffs at the superstitious rites. At first. But then Madame Kyra (Helene Thimig), the old lady who regales Pherides with tales of the dreaded vorvolaka, slowly gets under his skin. Pherides’ transition from ardent skeptic to radical believer seems to suggest that people prone to radicalism will remain at the extremes of conviction even when their beliefs change. At one point early on, though, the archaeologist catches Pherides burning a pyre for the gods, suggesting that he might not be as radically skeptical as he seems. At the same time, too, when Pherides succumbs to his paranoid delusions, he still has a desire to maintain order by taking the lead and delegating responsibility. Indeed, on his deathbed Pherides confesses, “I’ve had command for the last time.” So the exact nature of his skepticism and belief is vague. In truth, there’s probably a lot he’s hiding from himself.

Robson keeps the action mostly contained in the mansion and its surroundings, no doubt making the budget-conscious Lewton quite happy. The movie is shot quite competently, with minimal camera movement, except when needed for emphasis, particularly shots that close in on a group of people to seemingly constrict them, giving the audience a sense of claustrophobia. Karloff is superb, his eyes growing slowly madder as the movie heads toward its conclusion.

Bedlam is based on the psychiatric hospital of the same name, founded in 1247 in London and still in operation today. The conditions were often atrocious and the patients suffered terribly. All this is reflected in the movie.

The story concerns Nell Bowen (Anna Lee) and her awakening to the cruelty of the hospital and eventual advocacy for the inmates. But first, she’ll be committed and have to serve some time in the place, under the cruel eye of Karloff’s Master George Sims. Sims is a guy who is so corrupt that in order to get a commission to write a play starring the patients of Bedlam, he drives his rival to kill himself. A real bastard, this one, and without any redeeming qualities. We hope for his comeuppance throughout the film, but when it finally happens, we’re actually kind of guilted into feeling bad for the guy because of a Quaker stonemason who becomes Nell’s love interest and advocate. Since he’s Quaker, he’s staunchly anti-violence, which goes somewhat against Nell’s plan to exact revenge on Sims and get the hell out of Bedlam.

The dialectic between violence and pacifism is the working theme. It’s not possible to convince the Quaker to engage in violence, but at one point Nell is able to get him to give her a trowel so that she can brain Sims if need be. She doesn’t end up using the weapon, but another inmate does, resulting in the Quaker’s de-facto participation in an act of violence. How much responsibility does he bear? By the end of the movie, a strange lesson is learned when the Quaker, who knows that the inmates have murdered Sims and sealed him inside a wall that was under construction, decides to remain silent so that the patients are not punished or killed for their crimes. At the very least, the lesson is that morality is complex, fluid, situational.

Robson again mostly stays out of the way in this movie, letting the actors and script, which he co-wrote with Lewton, do the heavy lifting. Here again, when the camera moves, there is purpose. When Sims, early in the movie and at this point on friendly terms with Nell, brings her into Bedlam’s main room, a crane shot pulls slowly away from the two of them to reveal the atrocious conditions of the place — people living no better than animals. As the audience’s perspective widens, so does Nells.

Restraint isn’t something horror movies do very well, but in the case of these two movies, it’s necessary so that idea and subtext remain the focus.

Isle of the Dead and Bedlam is available now on DVD from Warner Archive.

DVD Review: The Kids in the Hall: Brain Candy

I love The Kids in the Hall.  The Canadian sketch comedy group, which rose to fame with their Lorne Michaels (Saturday Night Live) produced television show (1988-1994), embodies a unique blend of quirk and surreal […]