Shortly before our screening of Gillo Pontecorvo’s The Battle of Algiers, one of the organizers for the New York Film Festival announced that, unfortunately, Saadi Yacef—one of the real-life leaders of Algeria’s National Liberation Front (FLN) who both wrote the book the film was based on and starred in it—couldn’t make it to the festival. Apparently, despite being a sitting Algerian senator, his visa hadn’t come through in time. But perhaps it was for the best. I imagine if he had shown up he would have taken one good look at the audience for his film’s 50th anniversary screening and burst into laughter. I almost did the same.

I felt conspicuously underdressed in my T-shirt and blue jeans as I settled into my seat in the Francesca Beale Theater, a posh, cozy little auditorium nestled deep in the bowels of the Elinor Bunin Munroe Film Center. All around me were people dressed in suits and fine coats with a few scattered hipsters in-between. I suppose they meant well—the twenty-something millennial to my right held a copy of Cormac McCarthy’s All the Pretty Horses while the elderly dame to my left poured through Viet Thanh Nguyen’s The Sympathizer. Bougie pretensions aside, this was clearly an audience geared for appreciating the classics. But I couldn’t help noticing that very few of them would look out of place among the milk bars and dance clubs bombed by the FLN in Pontecorvo’s classic.

The Battle of Algiers is not a comfortable film; it’s a meticulous reconstruction of the struggle of Algerian guerrillas against their French colonizers. By today’s standards these freedom fighters would be called terrorists, not just for their unapologetic killing of innocent civilians but also for their methods. One of the film’s centerpieces, a masterpiece of scripting and editing that could double as a stand-alone short film, sees three Algerian women sneak bombs hidden in their purses into the French zones. We watch as they carefully assume the costumes of their enemies—chic dresses and Parisian hairdos, receive their deadly payloads, slip their way through military checkpoints, and linger in their targeted buildings long enough for their discarded purses to not seem suspicious. The parallels between these attacks and Islamic suicide bombing, attacks which frequently use women and children as carriers, were chilling enough to shock our theater into conspicuous, strained silence.

Not that this was a particularly boisterous audience; I daresay they only made noise twice. The first time was guffawed shock during an infamous conversation between Ben M’Hidi, a captured FLN leader, and the press:

Journalist: M. Ben M’Hidi, don’t you think it’s a bit cowardly to use women’s baskets and handbags to carry explosive devices that kill so many innocent people?

Ben M’Hidi: And doesn’t it seem to you even more cowardly to drop napalm bombs on defenseless villages, so that there are a thousand times more innocent victims? Of course, if we had your airplanes it would be a lot easier for us. Give us your bombers, and you can have our baskets.

The other time came in the form of nervous laughter during another press conference when an obviously American journalist asked a question in his pronounced American accent. I’ve always, always thought that one of the main reasons why American watch foreign films is to see how we are depicted abroad. Mercifully our reporter managed to not make an ass out of himself.

But what of the film itself, I can hear you all asking. What do you want me to say? It’s a masterpiece. Plenty of other critics have written more insightfully and eloquently on the film that I could ever hope to, in particular Roger Ebert’s magnificent 2004 Great Movies essay which draws parallels between the Algerian War for Independence and the rise of Iraqi insurgencies following America’s 2003 invasion. 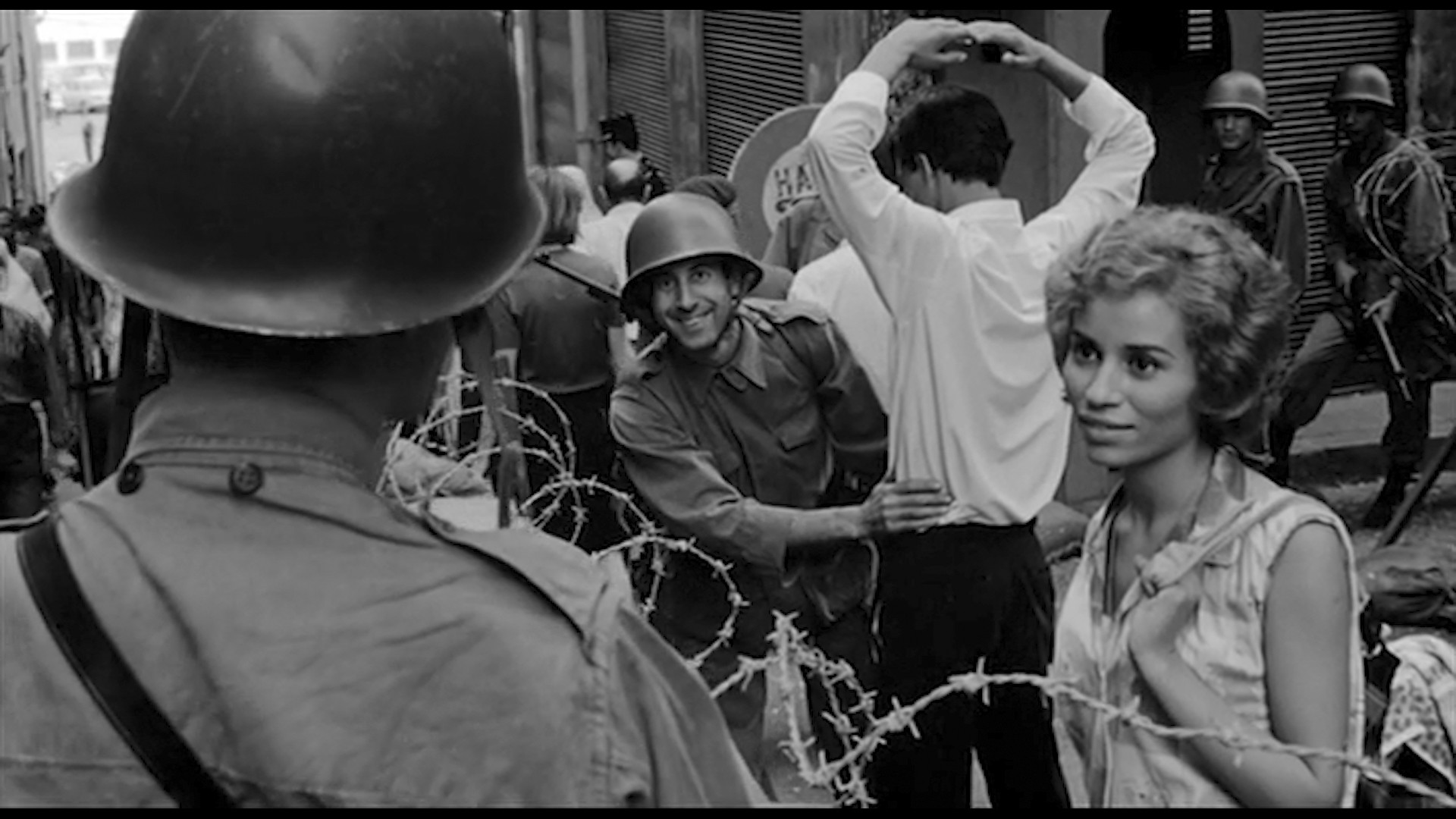 What I can comment on is the much lauded 4K restoration of the film. I must admit that I found the idea of a crystal-clear 4K restoration of Algiers somewhat counter-intuitive: Pontecorvo’s cinematographer Marcello Gatti deliberately shot the film to look like cheaper newsreel and documentary footage. If you restore it to look too clean, it defeats the entire purpose of the film. But thankfully, the film’s grainy, washed-out look survived intact. Look at how the walls and roofs of the Casbah seem to blur into the blazing sky. Look at how the film grain makes the faces shimmer during close-ups. And look at how we can finally get a clear view of Lieutenant-Colonel Mathieu (Jean Martin, the only professional actor in the cast), the leader of the French paratroopers tasked with crushing the FLN, during the long shots of the crowd as they dynamite the few remaining guerrillas in the climax. It was here that I noticed something I had never seen before: Mathieu seems to be crying.

Of course, my fears that the restoration might be too good were occasionally realized. For proof see any number of the film’s street gun battles. During one early scene, the police machine gun a fleeing FLN suspect. But because the image was so crystal-clear, it became painfully obvious that the policeman was firing blanks—there were no squibs on the murdered character, no bullet holes in the wall behind him. It would seem that Pontecorvo stole a box of Magic Bullets from the set of an American Western, the ones that kill in one hit and leave no noticeable entrance or exit wounds. These Magic Bullets were even more apparent in a later scene when two guerrillas hijack an ambulance, kill the doctor onboard, and spray bullets wildly into a crowd of Europeans. Despite successfully hitting dozens, the large glass storefronts they stood in front of were untouched. I’m just saying…the European colonists may have been opulent, but I doubt many Parisian shopkeepers would have sprung for bullet-proof windows.