That smile you can’t wipe off your face when they come onto screen. They’re not doing anything noteworthy, but it’s the recognition of who these guys are, and their absolute commitment to the roles that starts you smiling. And then within moments, you find yourself chuckling, and finally, you’re laughing out loud, unable to stop for 100 minutes.

That’s’ the joy of watching Alan Arkin and Peter Falk. For me, Alan Arkin is one of our national treasures. An actor so steeped in the human experience, so good at bottling whatever it is that’s so relatable, and then letting small bursts of it to come forth in the most manic and irrationally believable ways possible — this is the distillation of what makes Alan Arkin so great.

And Peter Falk. Young and old identify him as the rumpled, seemingly guileless detective Columbo, who like most of Falk’s characters, is crazy like a fox, only revealing in the final act how methodical every thing he’s done was to reveal the true nature of man.

But he was much more than that. Falk was an actor of surprising depth; starting out in small supporting roles, then moving up to some very wacky and wild characterizations, from The Great Race to It’s a Mad, Mad, Mad, Mad World and Robin and the 7 Hoods. We knew Falk was funny, but it was his soul searing work with Cassavetes in A Woman Under the Influence and Husbands that gave us pause to rethink the man and the actor.

Uniting these two consummate actors seems like a no-brainer that should have happened from their earliest years, but it took Arkin just casually thinking one day, I want to work with that guy; that started the ball rolling and eventually lead to the comic classic, The In-Laws, now lovingly curated and available from The Criterion Collection. 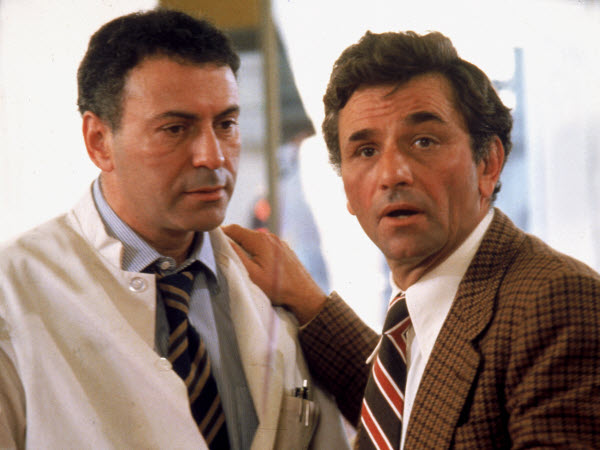 Arkin is credited as Executive Producer, and for good reason. He sought out the writer of Blazing Saddles, Andrew Bergman with the assignment to write a script for him and Peter Falk to play off one another. His only mandate; Falk’s character had to drive Arkin nuts. Those were the only parameters. And within two months, Bergman came back with his finest script ever. Arkin was amazed and declared there would be next to no rewrites, the material was that good.

Then Arkin pulled in director Arthur Hiller. The two had worked previously on the dramedy Popi, and the result had been so successful, he wanted to repeat that synergy.

Getting Falk involved was a little more tricky. Warner Brothers wanted Arkin to make a sequel to Freebie and the Bean, a highly successful 1974 action comedy that audiences loved and Arkin vehemently hated. But he had a strategy, and when meeting Falk, casually asked if Falk wanted to make the sequel together. Falk, trying to be polite, said that film was too violent for him, and he was not interested. “Good,” Arkin countered, “neither am I.” From that point on, they knew they would get along. 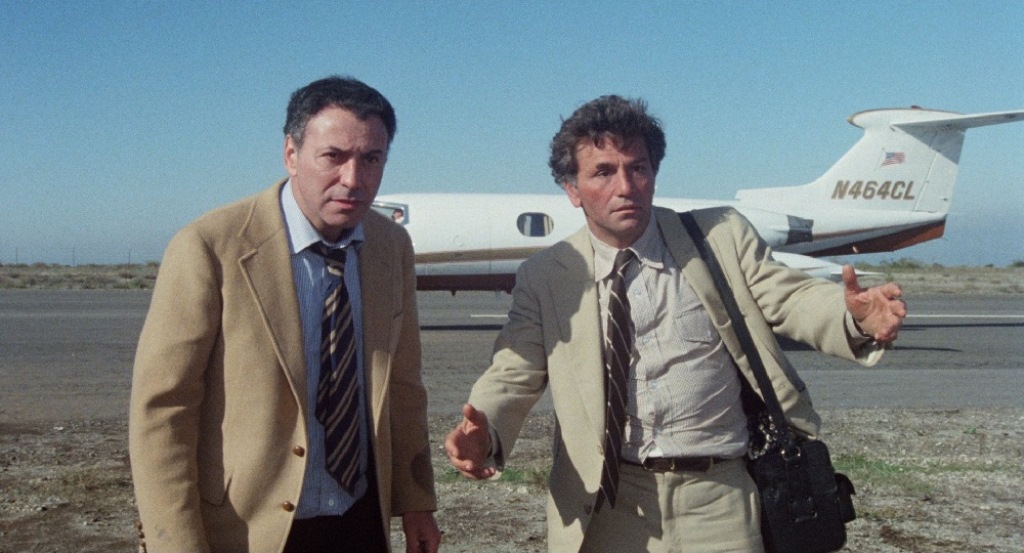 This, then, was the climate that The In-Laws was born from. Even though Arkin claims it was the first film he actually enjoyed making, and the cast had a lot of fun with it, that doesn’t always mean the end product will be a success. Far from it, sometimes the most difficult and hate-filled shoots result in the greatest films. But The In-Laws defies logic, from its surreptitious alchemy, and the plotline, to the dialogue. Oh, that dialogue! It has become endlessly quotable, to the point that Falk and Arkin were stopped in the streets for decades with people joyously quoting:

“There’s no reason to shoot me! I’m a dentist!”

“You know, I’m such a great driver, it’s incomprehensible that they took my license away.”

Watching the beautifully restored comedy on Criterion is an event unto itself, but to really enjoy all the gifts this package has to offer, you must go back and play the audio commentary. Recorded back in 2003, all the major players were still alive and having a riotous good time. Writer Andrew Bergman, Director Arthur Hiller, Peter Falk and Alan Arkin spend most of the film laughing, snorting and back-slapping as they remember shooting some of the classic scenes, and endlessly quoting the greatest lines themselves. It’s so spontaneous that at one point, Arkin excuses himself to leave and go to the bathroom.

The story, which is rooted in farce and seems to be written by a man as crazy as Falk’s character Vince Ricardo (that name!) ends up with such a fine and well-deserved finish; you may be laughing throughout, but you will surely come to respect the careful plotting that somehow, illogically, makes perfect sense.

Great comedy is born from situation, and the set-up couldn’t be more perfect. Falk is involved in some type of federal crime, heading up a gang that robs “engraved plates” from a US Treasury Armored Truck. Falk is planning on selling them for an astronomical figure, but needs to make the sale final this very weekend, the same time that his son is to marry a girl Falk has yet to meet, let alone her family. Arkin is a dentist, and the father of the bride. He and his wife are just as curious and suspicious of this union for the same reasons, especially since they’re footing the bill. A dinner is set at Arkin’s house for the two families to meet. Arriving an hour late, Falk and company burst onto the scene with excuses and apologies, and somehow, Falk has taken the dinner hostage and begins telling a tale of his time in the Amazon, watching helplessly as Tse Tse flies the size of dogs would snatch up “little brown children in their beaks and fly away.” The greatest comedy is reaction, and watching Arkin try to swallow these tall tales and still remain respectful to his dinner guests is just one of the marvels that make Arkin the consummate professional. This is also the moment when Arkin is aware that Falk’s Ricardo is really not all there. 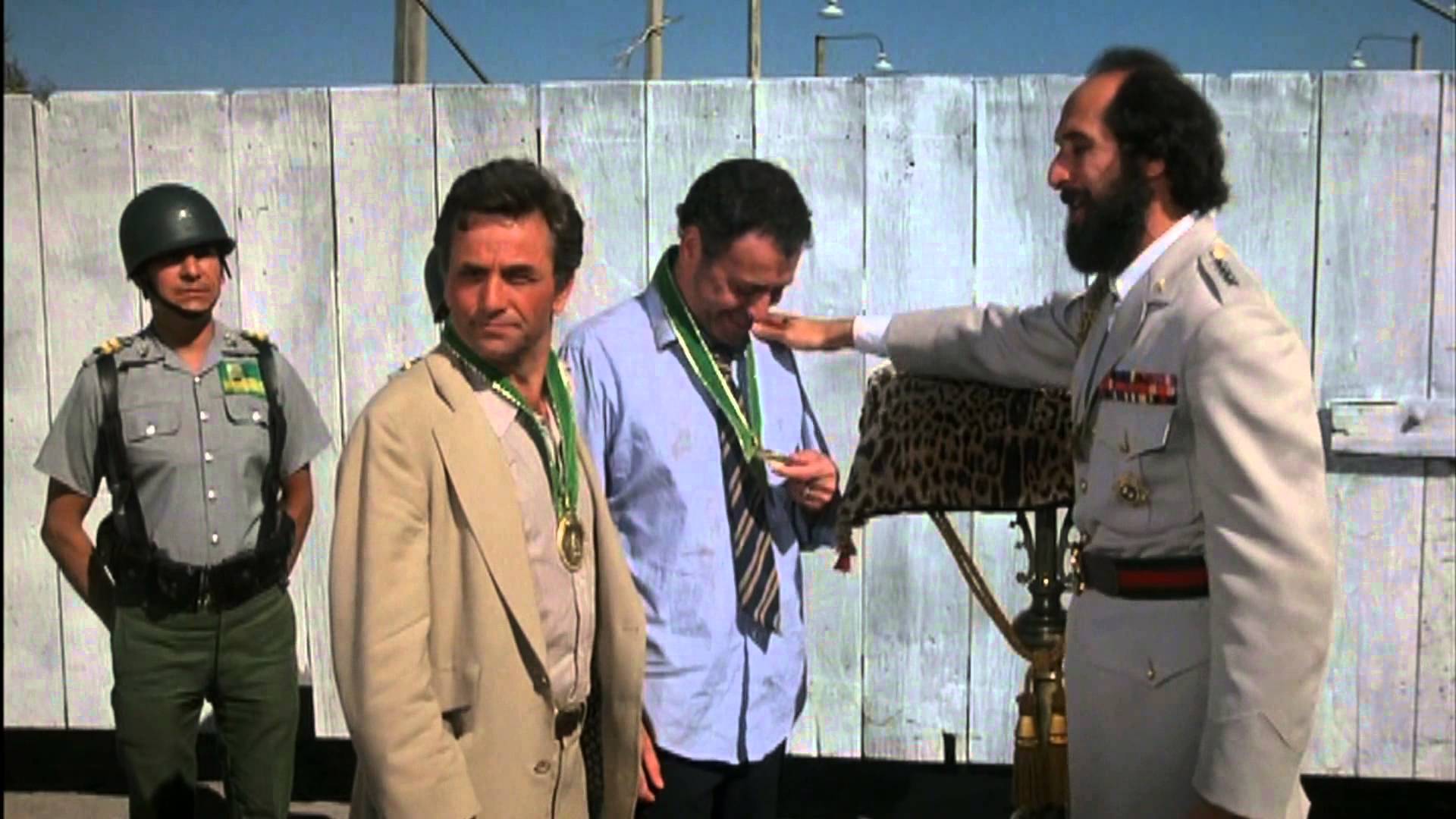 But a pivotal scene after dinner where Arkin’s daughter pleads with him to lay off Falk and his suspicions, and embrace the soon-to-be father in-law is the impetus to allow Arkin the “room” to bite off the taller tales and the willingness to extend the olive branch to Falk under the most ridiculous circumstances. Falk quickly encroaches on Arkin’s good graces, and within a day and trying to stay true to his word, Arkin is breaking into Falk’s office to take those engraved plates out of his safe, and lead some serious looking men with guns on a feverish chase.

The great thing about Hiller’s direction is he falls back on the lessons taught by the great comic directors; Chaplin, Keaton, Wilder and Lubitsch. He keeps the frames wide, or at least in 2-shots, so the actors can do what they do best, act and react off each other. Some scenes play out in a wide so the tempo is not the result of an editor, but the actors themselves bouncing and playing. As Falk keeps pressing Arkin into more dangerous service, it’s the skill of the writing and the acting that suspends the viewer’s disbelief. We WANT to believe Falk, because he’s so darn likable. And in fact, during the commentary, Falk remembers that was Director Hiller’s only advice to him when starting production, just make Ricardo “likable.”

This, then, gives the scenes such great stakes. Any sane person would turn and run from Falk, but Arkin can’t help but be pulled into the machinations of this ex-CIA operative (or is he?) and his illogically logical scheme.

And in fact Arkin does try to run, in one of the most hysterical moments, when Arkin has been told by the US Consulate’s Ed Begley Jr. (then just a kid) to stay as far away from Ricardo as possible. Having discovered Arkin on the phone, Falk tries to measure whether Arkin will still be an ally, who mid-sentence just bolts through a hotel lobby. Falk must fall on him, piggy-back style to take him down. They have a rational conversation, stand back up, and then mid-sentence again, Arkin takes off, only to be knocked down again.

Yes, there are fun car chases and well choreographed shoot-outs, and having been burned on Freebie and the Bean, you would think Arkin would have shied away from such tropes. But he explains in the commentary that when action is supported by story, you’re on solid ground. Director Hiller admits story and comedy generally stop during a car chase because as impressive as the stunts are, you’re inevitably just watching cars speed through streets. Therefore, it was important to always cut back to the characters in the car.

One such scene was totally improvised (and Arkin admits the script was so solid that 95% of it came directly off the page) where Falk and Arkin are driving like mad through a Mexican market. There was no dialogue planned, so before cameras rolled, Arkin asked Falk what he had for lunch. Once action was called, Falk, in the midst of tearing through food carts and people, describes a chicken sandwich that Arkin must try the next time he comes to town. And again, as hilarious as Falk’s recounting of this sandwich is, it’s always those Alan Arkin reaction shots that drive the scene and cause the bellylaughs.

There’s many more great moments and endless stories told by the main players, so rather than blandly recount them, you need to get this package. Warner Brothers tried to make lightning strike again by remaking the film with Michael Douglas and Albert Brooks, but it was nothing compared to the original. Do yourself a favor, buy the Criterion Blu-ray and play it for the whole family. Then play it again with the commentary, as well as  Arkin’s 2016 interview made just for this release.

You will not be sorry. And you’ll never hear the word “Serpentine” again without running like a headless chicken. Thanks to Hiller, Bergman, Peter Falk and Alan Arkin.