The man’s name was Rodolfo Alfonso Raffaello Pierre Filibert Guglielmi di Valentina d’Antonguella from Castellaneta, Italy. But the legend’s name is Rudolph Valentino from the magical fairyland of Silent Hollywood.

He was the movie’s first ever sex god, and even 90 years later there are very few to touch him. Women committed suicide when he died, unexpectedly from a appendicitis at the age of 32 and, even to this day, it is still mourned by devoted legions of his fans.

He was The Sheik. The Great Lover. Also, pretty sure the word “smolder” has his face next to it in the dictionary.

Here at The Retro Set, we love everything about Rudy.

We love his socks. 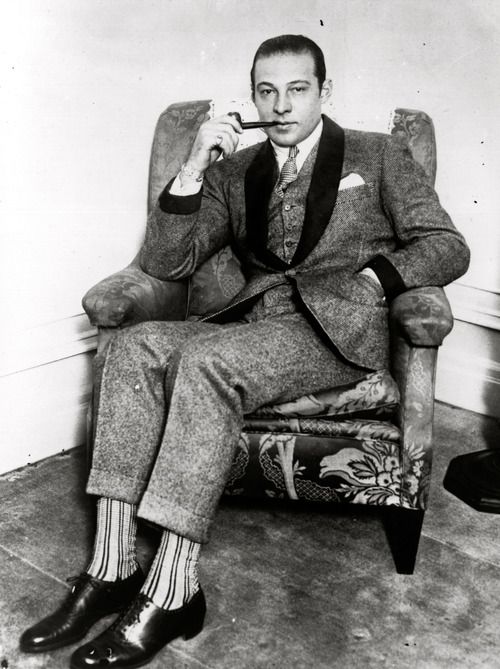 We love his dogs. 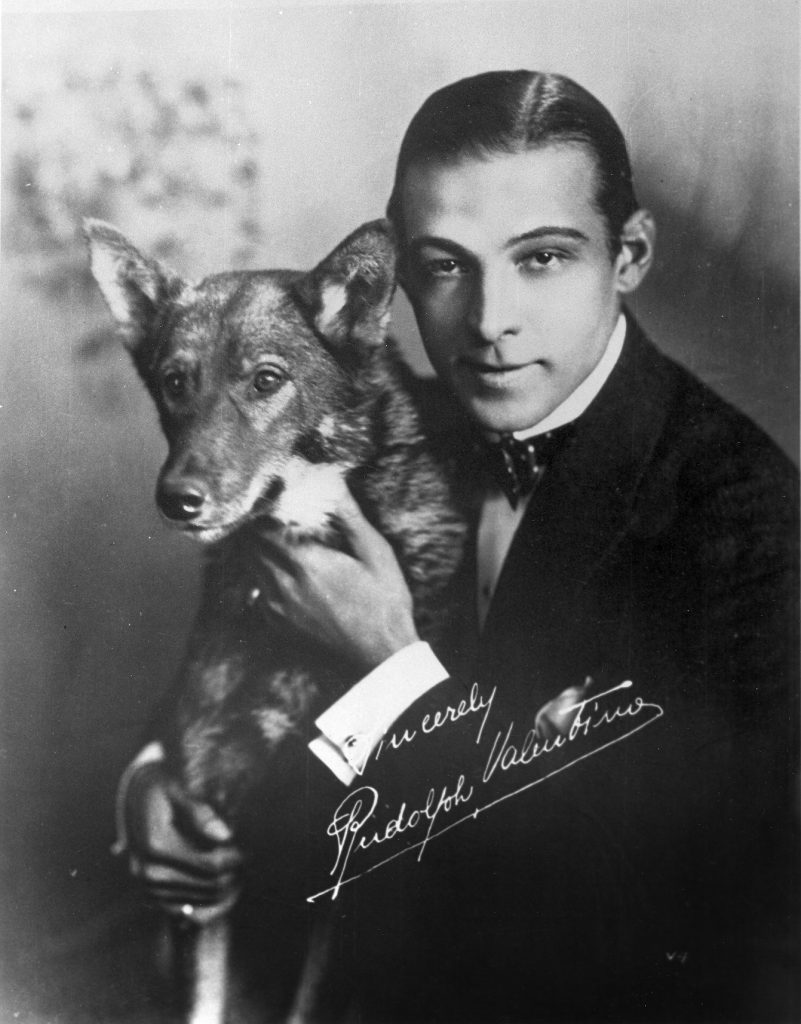 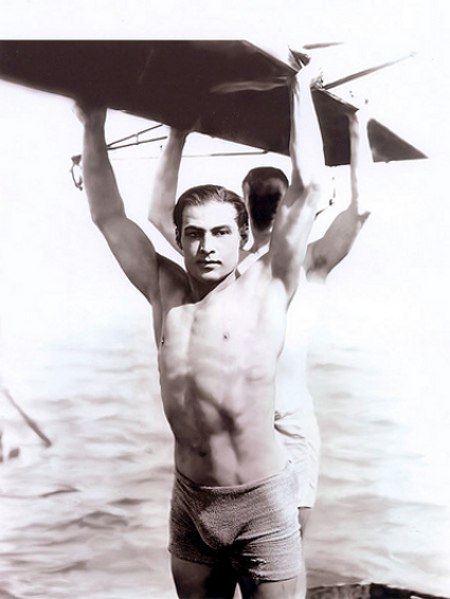 We love his complete mastery of the art of the goatee. 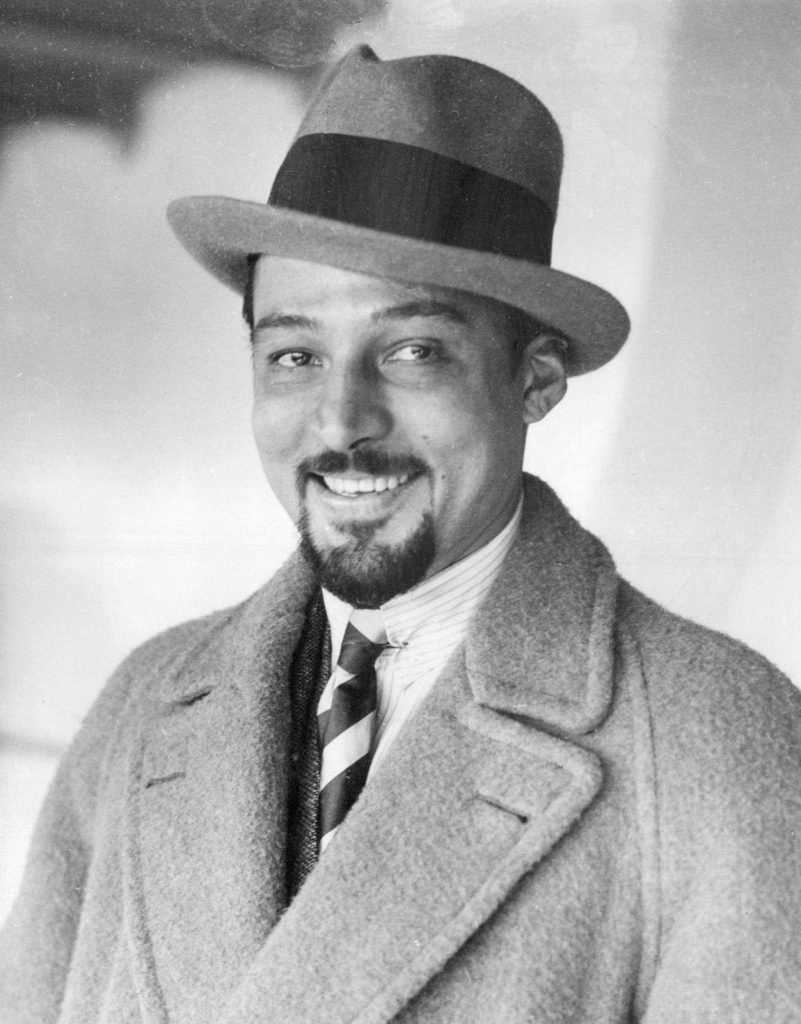 And the hand kiss. 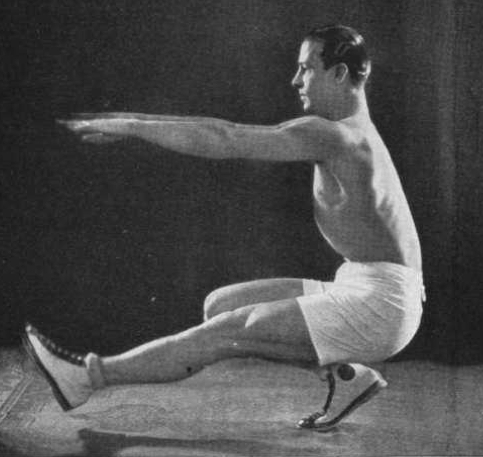 (Sorry, this one just needs to be shared) 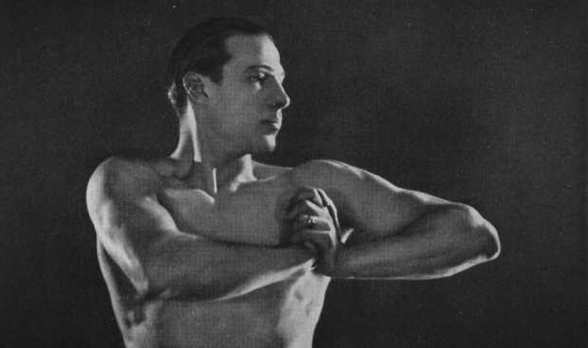 And of course, we love his dancing moves. (If you don’t know much about this guy, this is pretty much all you need to know: Rudolph Valentino is pretty much the reason we Americans even know what the Tango is.) 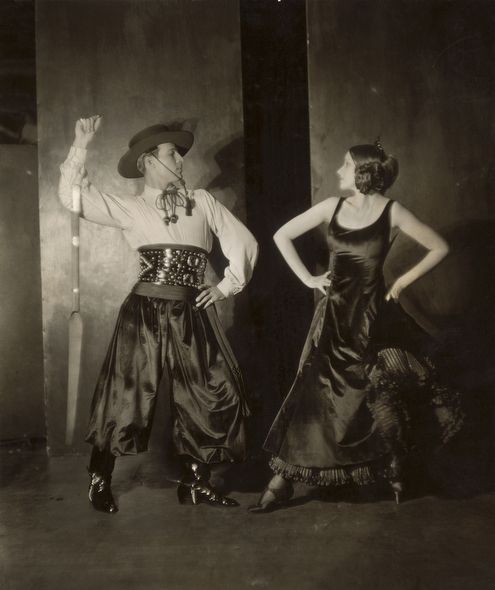 But we also love the fact that Rudolph Valentino was … a foodie.

I mean, he was Italian so I suppose that shouldn’t come as too much of a shock, but this man loved his food. More to the point: he loved his pasta. And it became quite the rumor around the Hollywood colony that Rudy’s own “secret” spaghetti sauce was the best in town.

So after stumbling upon what is rumored to be Rudy’s secret spaghetti sauce, it felt right to kick off The Retro Set’s new column “The Retro Kitchen”, which is dedicated to bringing vintage recipes to modern dinner tables,  by attempting to re-create a real Valentino Original.

This recipe comes via Rudolph Valentino biographer Donna Hill, and has been previously tested out on the fun, fabulous blog Our Mother’s Kitchen, among other places. Although we’ll never know for certain if this is absolutely 100% THE actual recipe Rudy used on a weekly basis (according to Gloria Swanson, his biggest concern wasn’t the scene, but what kind of pasta he was going to have for dinner) … it’s close enough for us.

Turn on some hot ’20s jazz (or, perhaps more appropriately, some tango music) and follow along at your own risk.

The key to this recipe isn’t so much the “secret” ingredient (which is coming soon) but the foundation. The base of this sauce is built on some very strong flavors and you’re going to have to be a bit ambitious here and not skimp on ’em for this recipe to work.

Take one bunch of fresh oregano and rosemary and finely dice them until you’ve got 2 heaping tablespoons of each. Same goes for fresh garlic: dice up at least 3 cloves of until you’ve got a decent 2 tablespoons full.  (As you can see, my idea of “dicing” is probably more along the lines of “chopping”, but pairing knives scare me so just deal with it.) 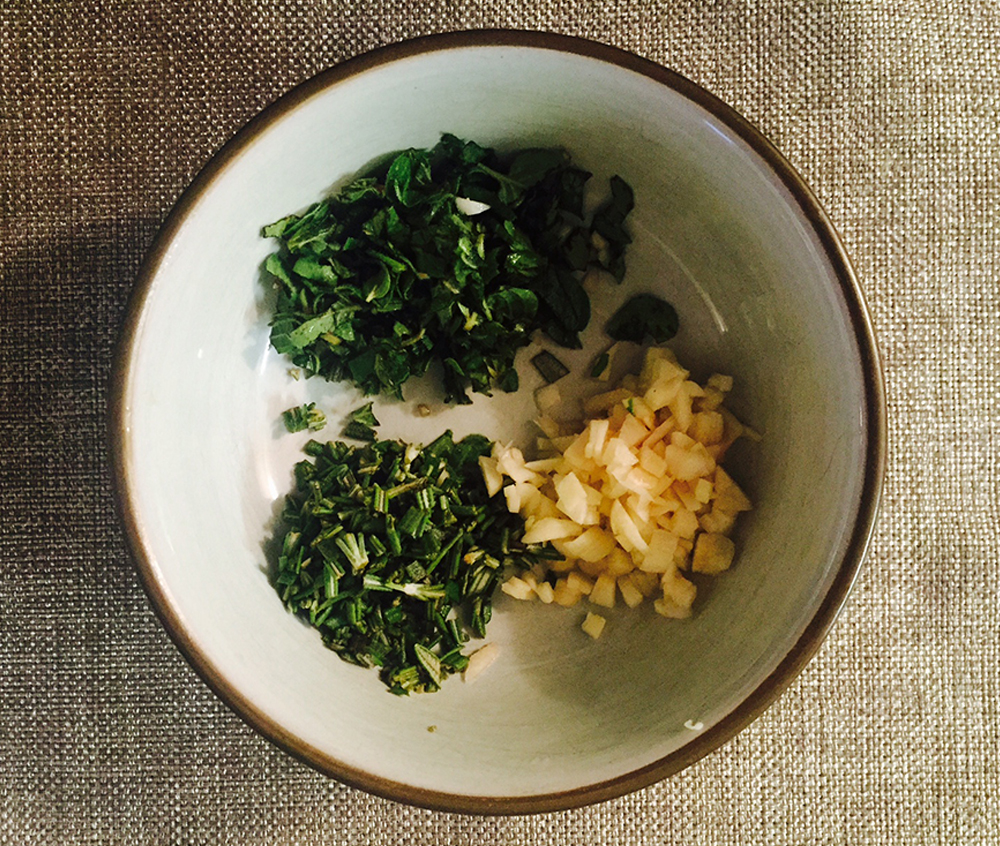 Chop up one large white (or yellow) onion. No crying allowed. 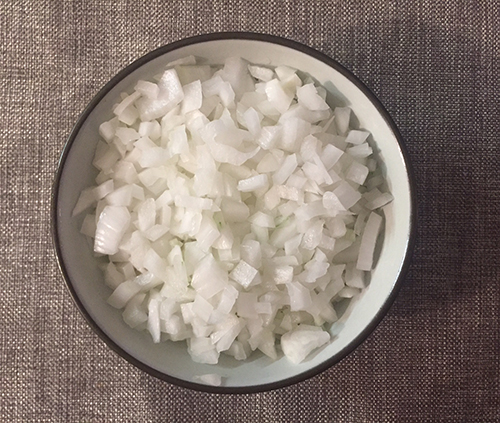 You’ll need one full contained of pre-sliced baby bella mushrooms. I like to chop even those in half, just to make ’em easier to cook with. 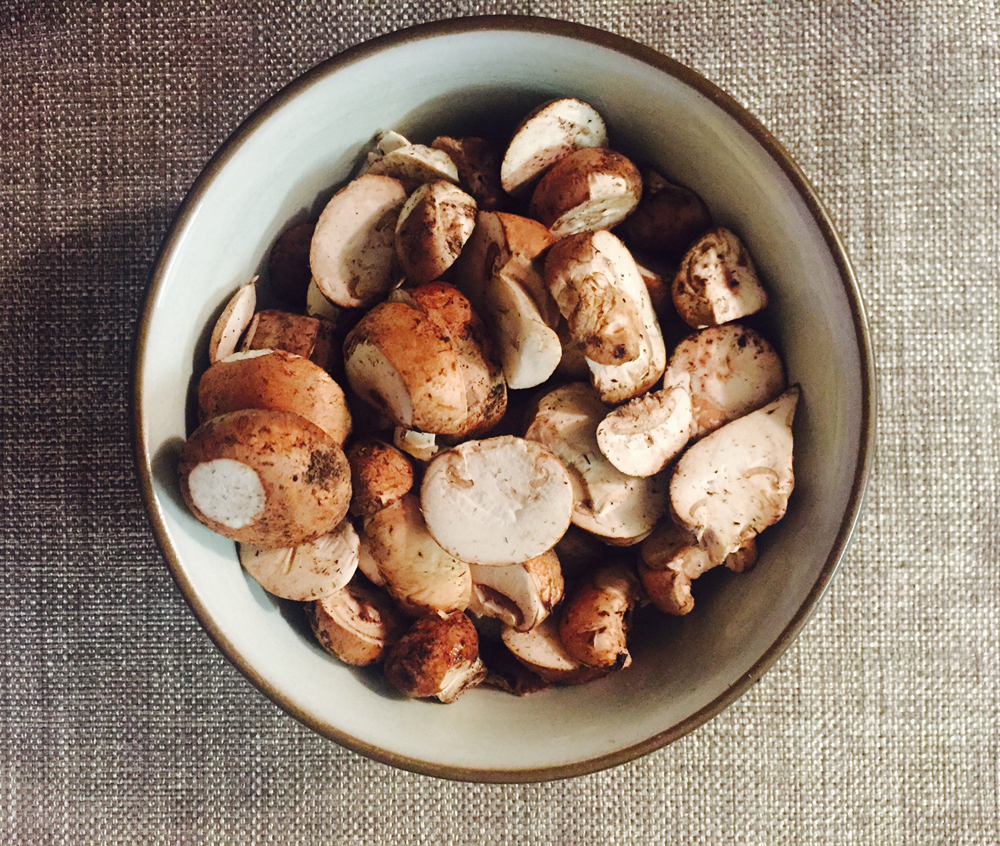 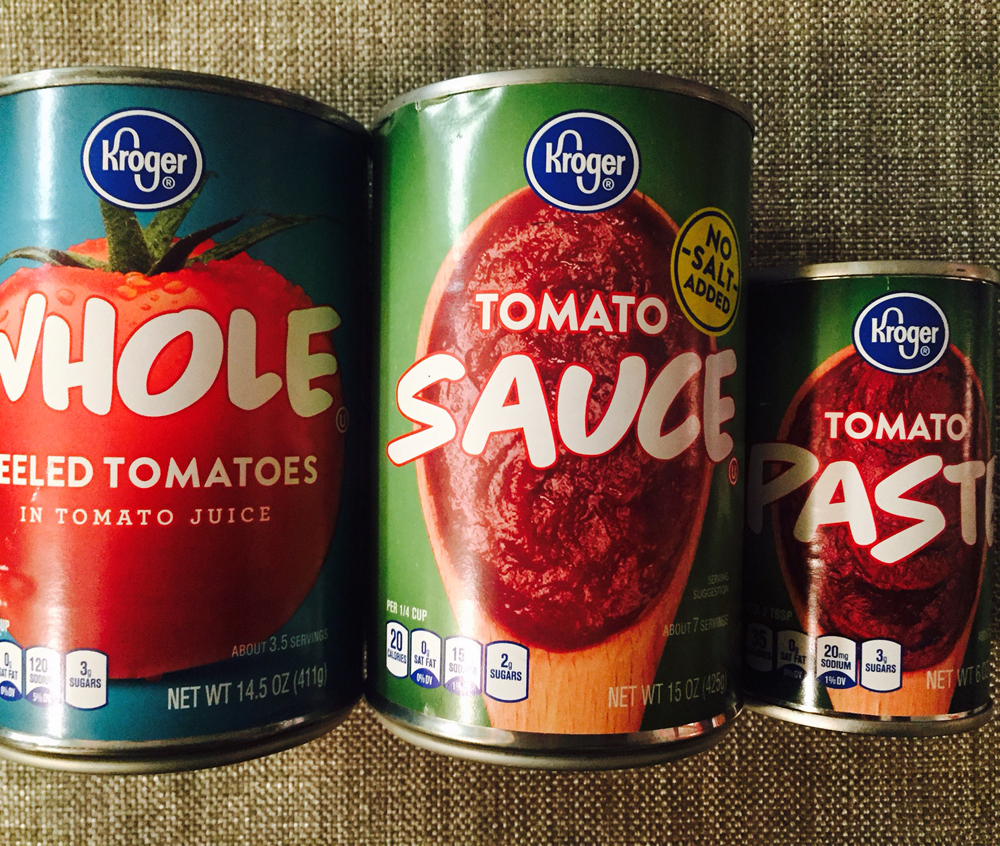 Ah, Rudy’s secret ingredient: anchovies. Before you go running for the hills, I’m not a fan of anchovies either but boy do they ever work magic in sauces. Rudy’s recipe calls for one whole can and … just stick with Rudy on this, OK? He knows what he’s talking about.

Dice them up well and try to ignore the texture/smell/everything. 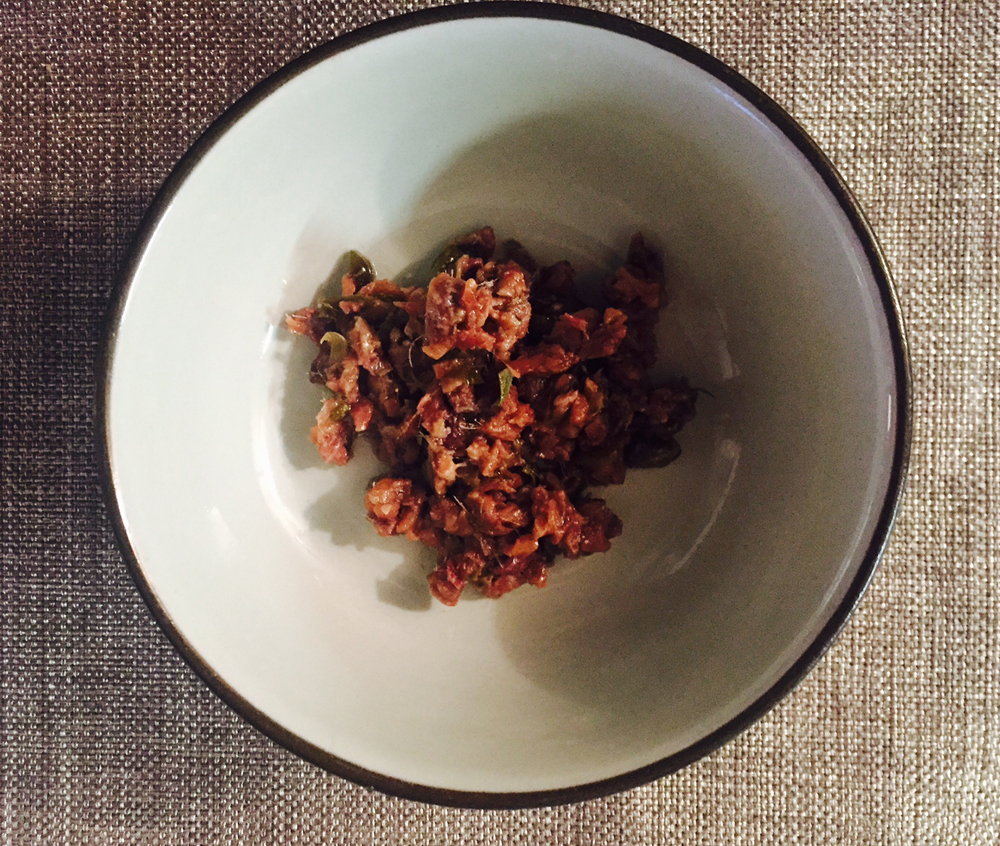 Now for MY favorite ingredient: 1/2 cup of a good dry wine. I used a Cabernet, but a Merlot or a Pinot Noir will work just as well. (Pro Tip: Use a FULL cup of red wine, and drink the first half of it yourself.) 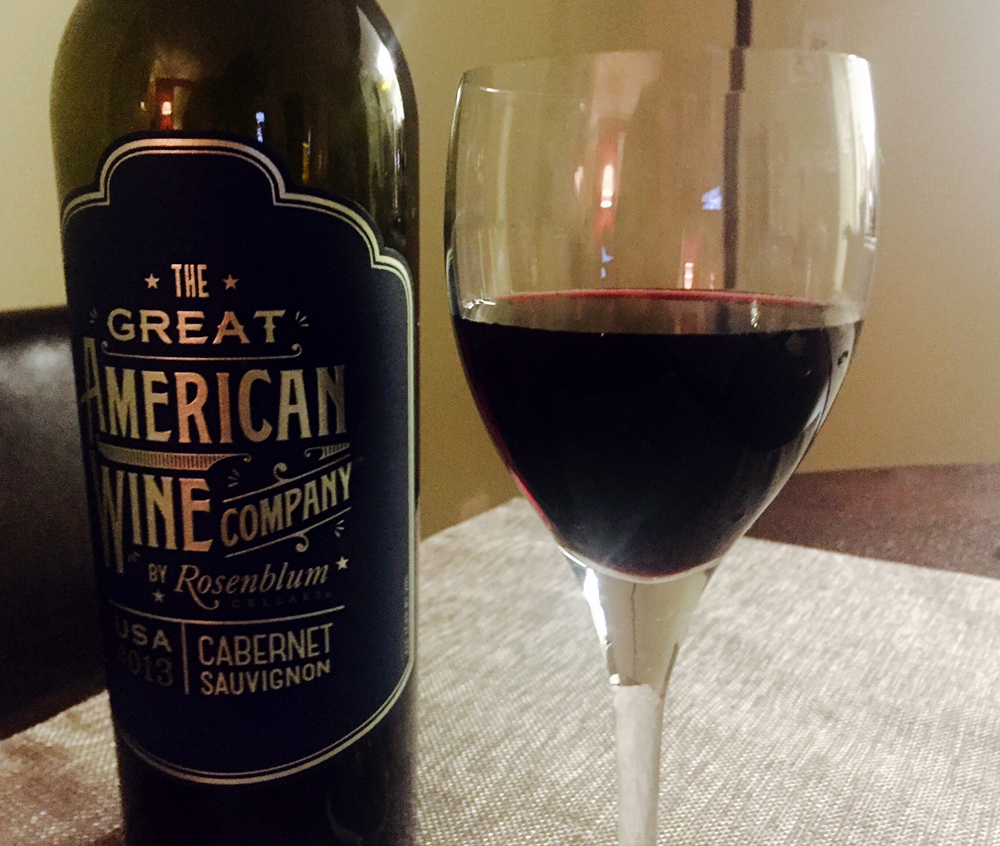 Note: Rudy’s recipe calls for sausage. I omitted this since I don’t eat red meat, but encourage you meat eaters out there to indulge! You’ll need 1 pound of spicy Italian sausage, chopped finely.

Right, now on to the whole … cooking thing. Since the prep is quite time-consuming, choose a leisurely evening to make this recipe. It’s simple, but it’s not necessarily something you want to make on a school night.

First, heat 1 tablespoon of olive oil in a large saucepan (dutch oven would be ideal)  and sauté onions and mushrooms. When softened, add your cans of whole tomatoes, tomato sauce, and tomato paste.

Then relish in the rich redness of your cauldron of deliciousness. 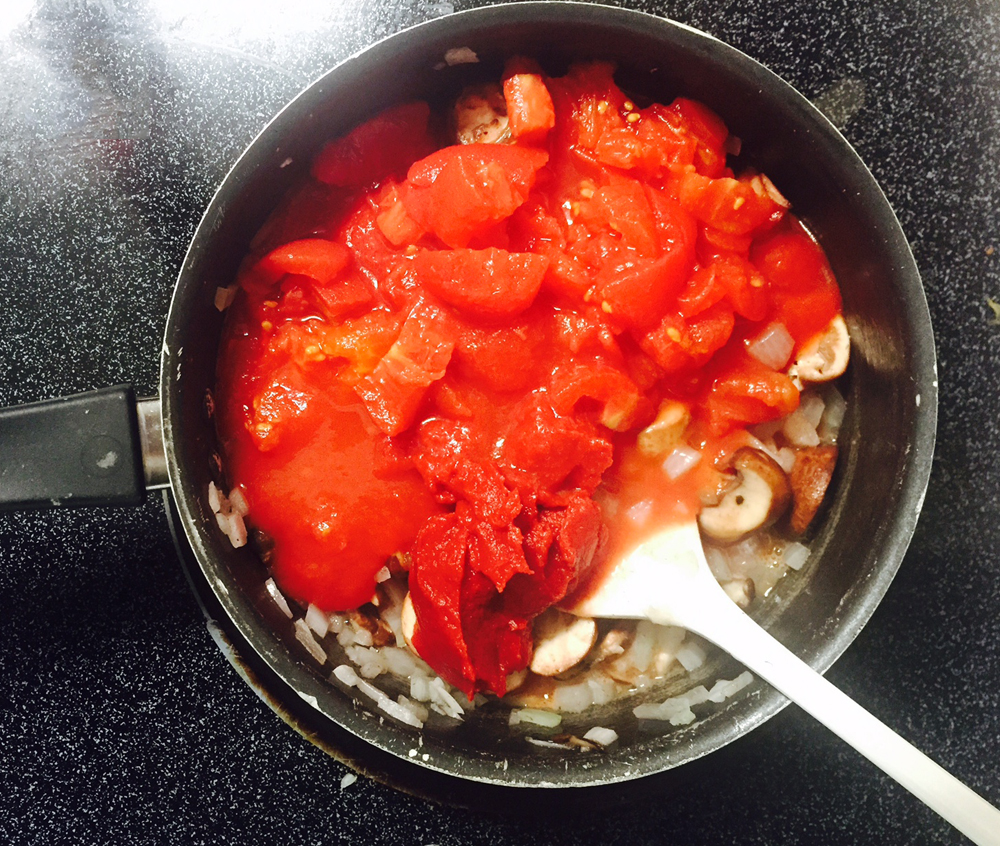 Now, if you’re adding sausage to the recipe, take this opportunity to add your chopped sausage into a skillet. Cook the sausage with a tablespoon of olive oil and 1-2 tablespoons of minced garlic.

Go ahead and add the cooked sausage to your saucepan/dutch oven and then throw in your herbs. 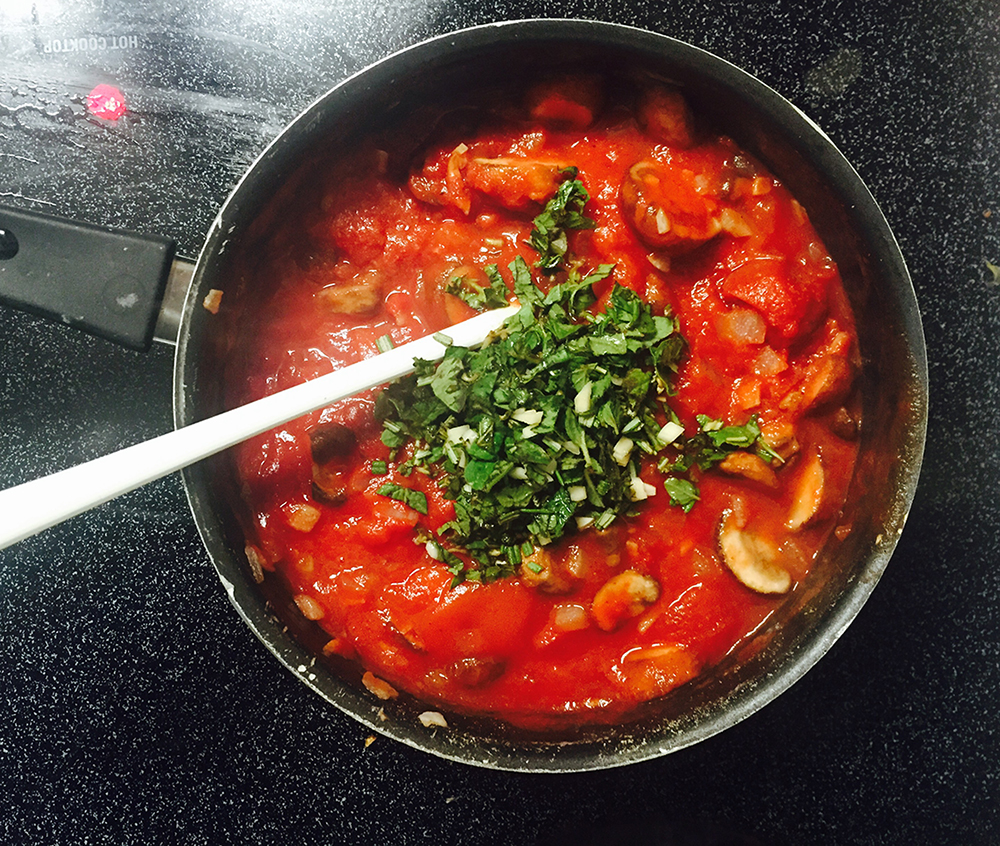 Now the fun part! De glaze your skillet by pouring in a half cup of dry red wine. (Hopefully, you’ve already finished off a glass of your own by this point!) After a brief simmer, add to your concoction in the saucepan/Dutch oven. 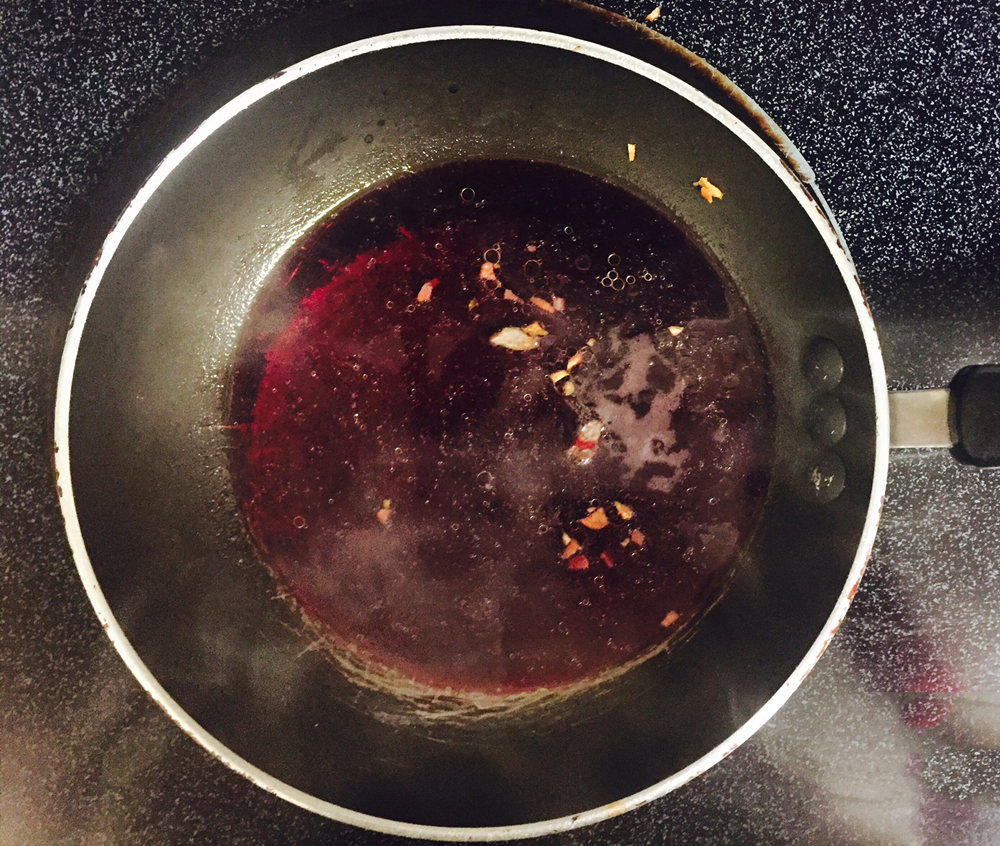 This is when the sauce really starts to pop. After the wine, throw in the anchovies. No, seriously: just do it. This is the “secret” ingredient in Rudy’s recipe, so don’t skimp.

Let the sauce simmer for a good 10 minutes, and taste. Add more anchovies if you think it needs a bit more kick. I only used one can of chopped anchovy, but Rudy’s recipe calls for 2 cans. It’s up to you and your palette what works best! 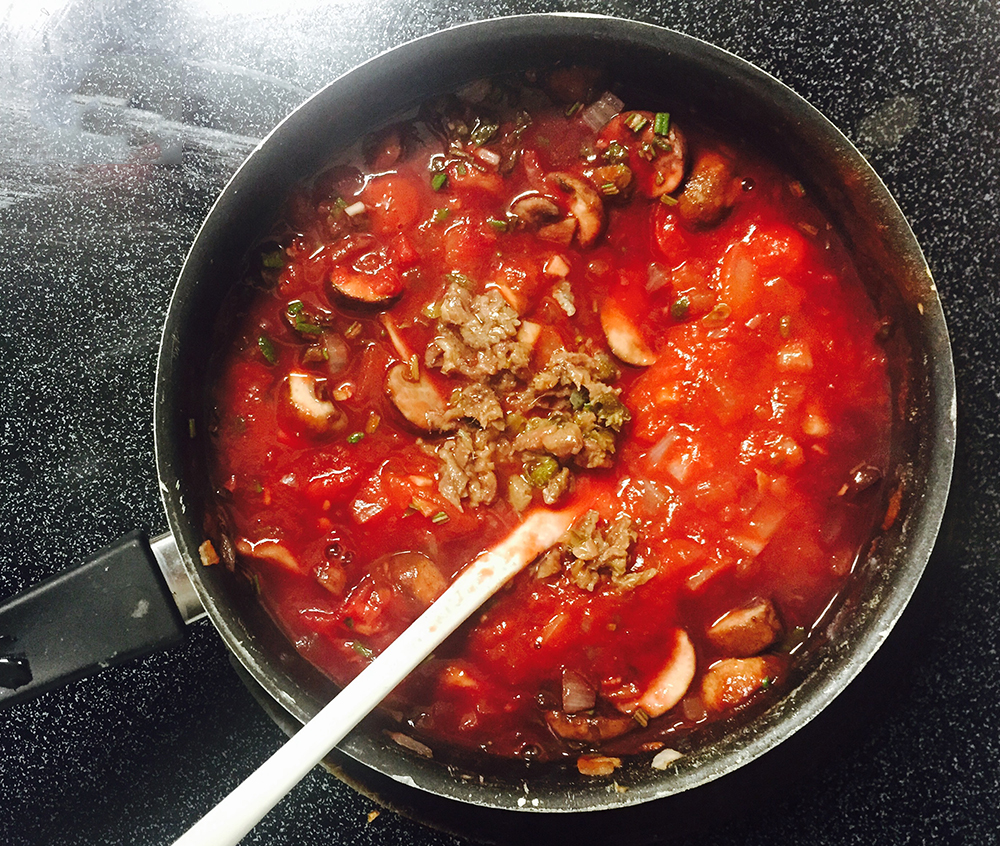 Put the heat on medium/low, and simmer for 20-30 minutes.

As far as which pasta to use? Spaghetti, obviously, although the authentic Rudy recipe would be to use the super long variety. You can purchase 2 foot long spaghetti at places like Trader Joe’s … although unless you want to end up like Lucy Ricardo at The Brown Derby, regular box spaghetti will suffice.

Toss together, add grated parmesan, open another bottle of wine, crank up the Tango music and … voila! A feast made for a silent movie star. 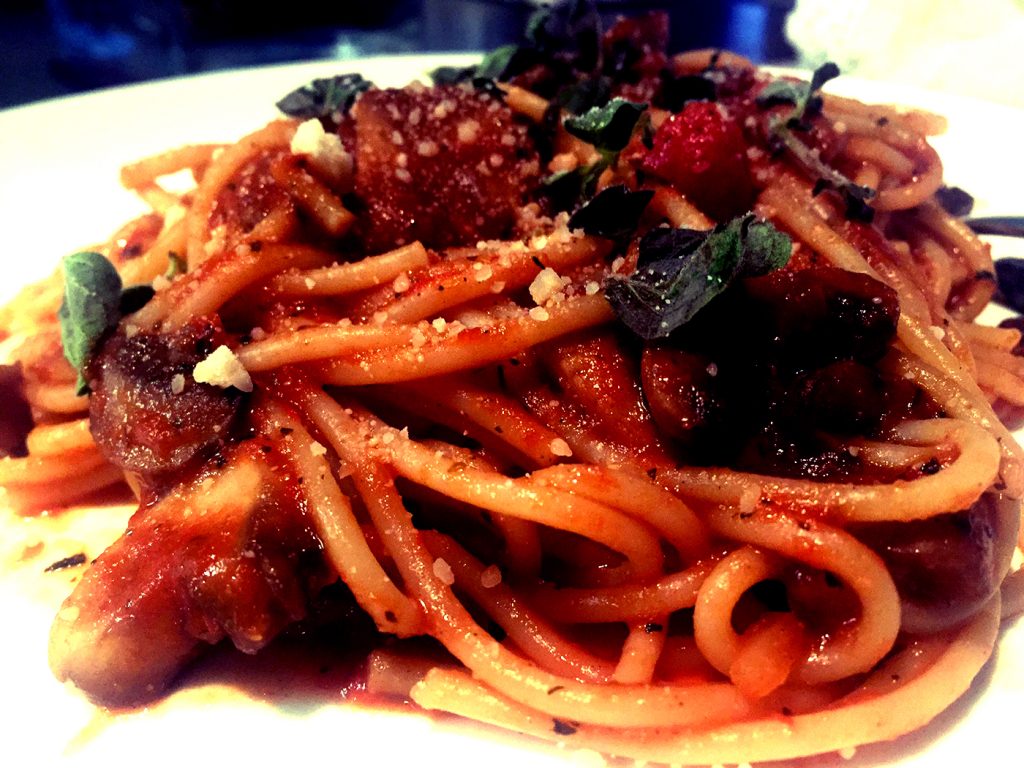 No longer the moniker for an illegal and highly flammable distillation, Moonshine is the new black. It’s also the best kept Holiday Secret.  If you see my wife and I imbibing, generally we’ll both be […]