At first, the studio wanted Bette Davis. But no, that wouldn’t have worked; audiences could expect cruelty and hysteria from an actress who had proven herself both bitch and beauty queen. After seeing her sit in silence as Herbert Marshall died in The Little Foxes (1941), there was almost nothing the American public would put past her.

The studio also wanted Henry Fonda. But mercifully, his agent refused to let him even read the script. Not only did he lack the proper temperament, such a monstrous role would have diluted the impact of his heel turn in Sergio Leone’s Once Upon a Time in the West (1968).

They turned next to James Mason, a fine choice who carried the necessary gravitas and pathos. But who to pair him with? Who could play opposite him as George, one half of the chimerical, self-destructive married couple in Mike Nichols’ Who’s Afraid of Virginia Woolf?(1966).

That’s when Nichols and producer Ernest Lehman struck upon a brilliant idea: cast Hollywood supercouple Elizabeth Taylor and Richard Burton. Many people, including the source material’s playwright Edward Albee, reacted with shock or horror. Taylor was the perfect picture of Hollywood glamour. Despite a slew of more recent films like The Sandpiper (1965) which flirted with troubled subject matter, Taylor was known first and foremost as the teenage equestrienne in National Velvet (1944), the socialite lover of Montgomery Clift in A Place in the Sun (1951), the infamous Queen of Egypt in Cleopatra (1963). And what of Burton? He was a smash on Broadway as Hamlet and shone as the titular character in Peter Glenville’s Becket (1964), but his tempestuous public persona made many understandably wary. 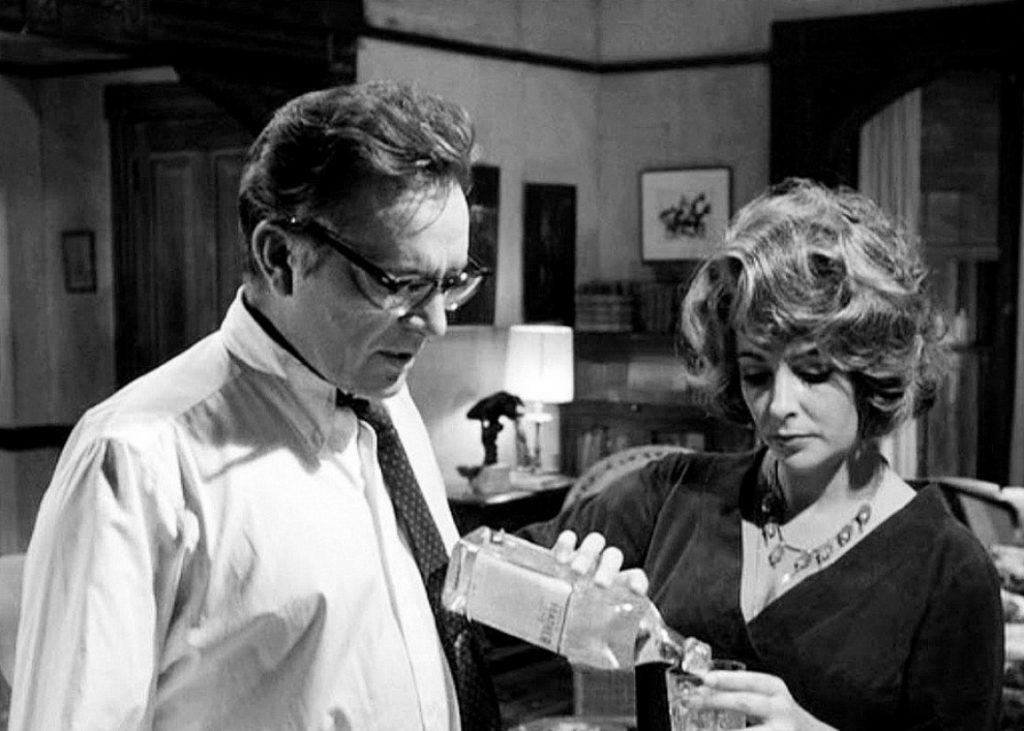 But their casting ended up being a boon. Who’s Afraid of Virginia Woolf?—newly available in a considerable Blu-ray release courtesy of the Warner Archive Collection in time for it’s 50th anniversary—went down as one of the defining American films of the 1960s. In addition to launching Nichols’ cinematic career, it would garner thirteen Academy Award nominations, becoming the only film since Cimarron (1931) to be nominated for every eligible Oscar category. Taylor would end up winning her second Academy Award for Best Actress while Burton would be nominated for Best Actor (an award this reviewer feels he unjustly lost to Paul Scofield for his role in A Man for All Seasons [1966]).

But more than just being a great film, it would go on with the dubious honor of being an “Important” film. It’s frank discussion of sexuality and graphic (for its time) language was so shocking that it became one of the first films to ever refuse admittance to minors. Alongside Michelangelo Antonioni’s Blowup (1966) it was credited by Jack Valenti—longtime president of the Motion Picture Association of America—as the impetus for establishing the MPAA film rating system. 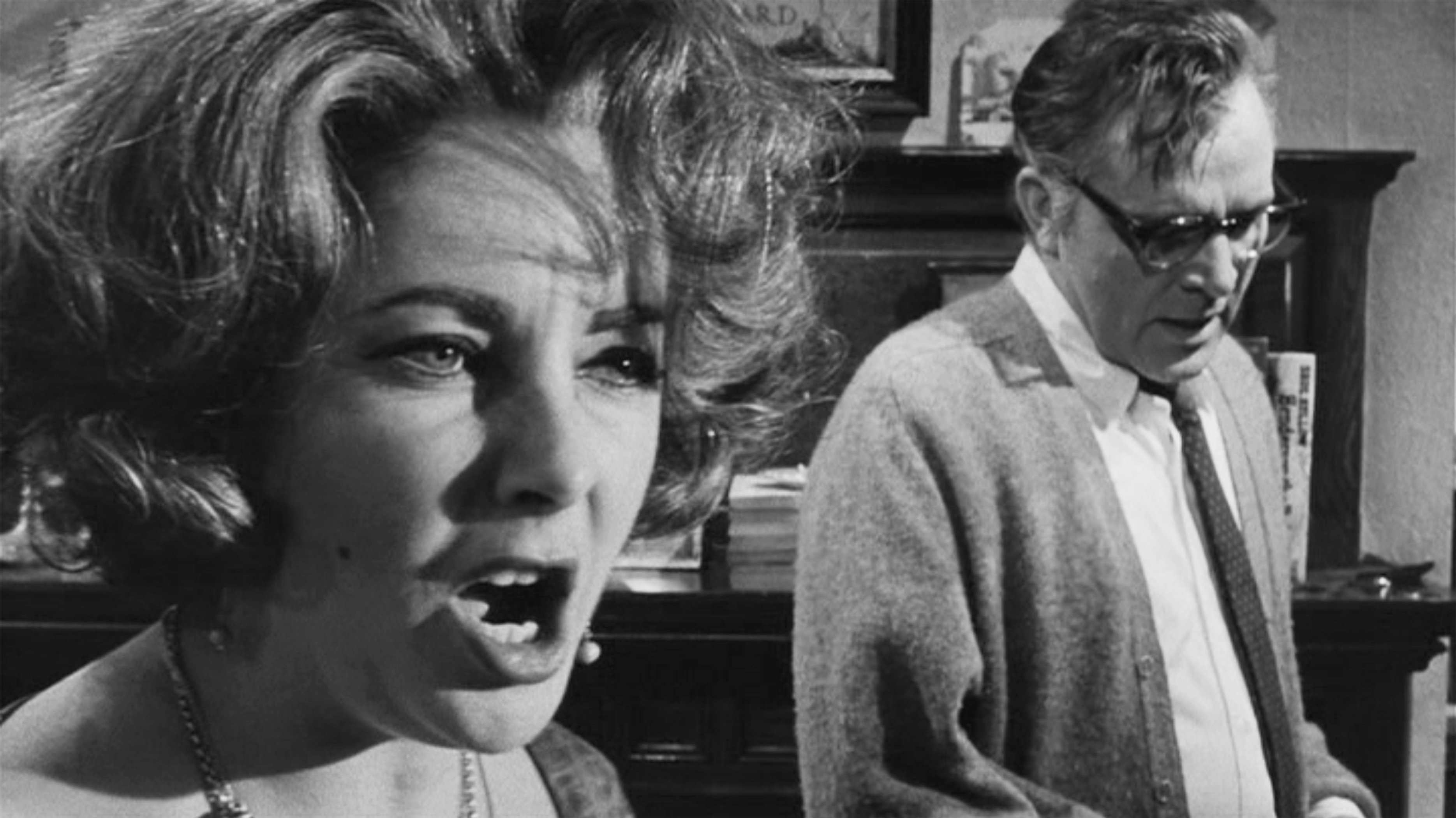 Above all, Who’s Afraid of Virginia Woolf? is a film of performances. On one hand, there are the actual performances themselves. Both Taylor and Burton give career-defining performances. Borrowing from their turbulent real-life marriage, their Martha and George are veritable gargoyles: nasty, cutting, vindictive. They are expertly complemented by George Segal and Sandy Dennis as the visiting married couple who unexpectedly get caught in the crossfire of their vicious pas de deux. Dennis in particular shines as Honey, a midwestern wife with a terrible secret and a suspiciously low tolerance for alcohol.

But the other performance belongs to Nichols and his cinematographer, the late, great Haskell Wexler, with their the willful, purposeful deglamorization of their actors and actresses. Consider the treatment of Taylor, who gained 30 pounds and wore a gray wig for the role. She chomps food between greasy fingers, bellows her lines like a donkey (“What…a…dumPPP!”), and cavorts in her bedroom in the early scenes like an inebriated college kid. One of the film’s great reveals comes when she disappears upstairs for a few minutes and comes back down after changing into something more “comfortable.” Burton, Segal, and Dennis are appalled to see that she has swapped her tasteful black dress for an outfit that can be most delicately described as a greaser hobbit (think Olivia Newton John’s Sandy Olsson thirty years and three kids later). Clingy black pants bulge her thighs and hips. A preposterously low-cut blouse scrunches her torso, gaudy necklaces dripping into her prominent bust. It’s an act of provocation, of visual castration for the spiritually impotent Burton. 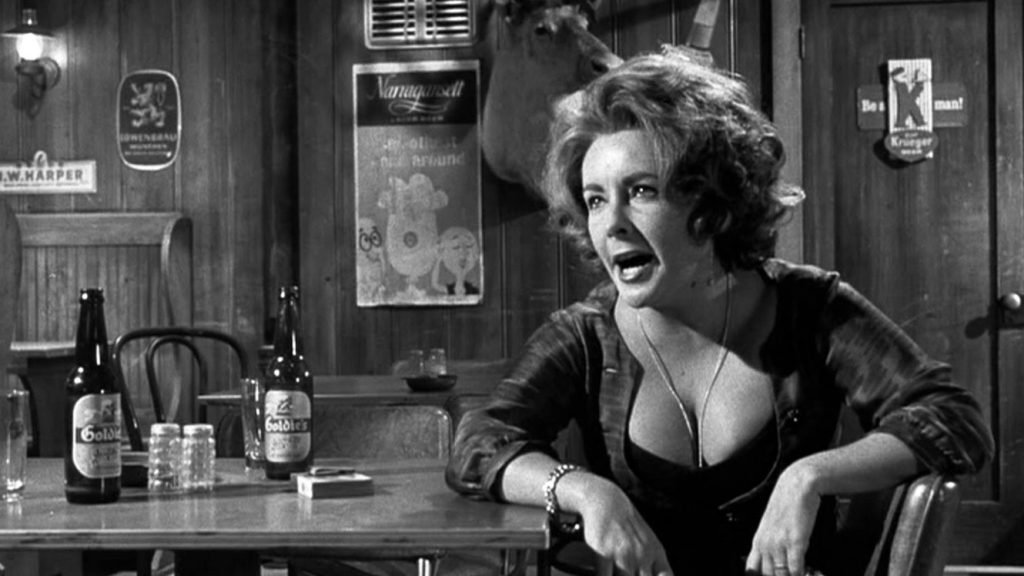 After spending a career doing Shakespeare and heady period dramas, Burton’s performance is shockingly undignified. Take an early scene where he collapses into his bed and lays there like a lump. Taylor straddles him and starts to ride him like a beast of burden. And like a beast of burden he lows in agony and resignation. He spends the movie grousing and complaining, trudging from room to room in a stupor.

It’s sometimes difficult to see where Burton and Taylor’s private lives end and their performances begin. After shooting ended, the two discovered that they had put more of themselves into the roles than they had planned on. Watching it with the aid of 50 years of hindsight, we can wonder if one of the reasons why Who’s Afraid of Virginia Woolf? succeeds is that it captured an authentic nuptial breakdown. Others can write long, pedantic evaluations of how the film helped give rise to the Hollywood New Wave; how it changed the industry forever with its brazenly mature content; how its preoccupation with the disintegration of marriage as a traditional social structure reflected America’s growing cultural disillusionment.