One of the many times I came to the realization that human existence is completely absurd was in early 1999. I had taken some acid and wound up at a party where a guy pulled out a photocopied book that explained his religion, which basically consisted of the belief that everything that happened in the Star Wars movies was completely true and that George Lucas was a prophet. Of course, the Phantom Menace had yet to come out and I can only wonder if seeing that movie was existentially shattering, or at least more so than it was for the rest of us. All this is to say that, my friends, I have stared into the eyes of the bizarre, and La bambola di Satana (which I will refer to from now on by its literal translation, Satan’s Doll, because it sounds cooler) is not bizarre. It gets quite weird sometimes, especially the mind-bending final fifteen minutes, but, gee, there’s also a lot of filler.

Satan’s Doll (1969) was directed by a fella named Ferruccio Casapinta. Supposedly. Most people, including writer and critic David Del Valle, who’s featured in the commentary of the Twilight Time Blu-ray release, believe the movie was actually directed by the A.D. The origin of this story seems to come mostly from the film’s star, Erna Schurer, and there’s no reason not to believe her. The cluttered storytelling and flat directing screams that this was a vanity project. Giorgio Cristallini and Carlo M. Lori are credited along with Casapinta for the screenplay and Alfredo Medori is credited with writing the dialogue. Four people involved in the story. And it shows. It’s like all four of them got to write a section at random and the script was sort of pasted together from there.

Apparently, Satan’s Doll was somewhat of a lost film for a while. Which makes me happy that Twilight Time went through the trouble of restoring it. The print looks great. There’s nothing to complain about there. I wish every movie, regardless of merit, could get such treatment, if only for the sake of posterity. But even Twilight Time knows what they have. In the booklet on the film included in the Blu-ray, they hype the film’s campy qualities and craziness. They never claim it’s a great film. Even David Del Valle and Derek Botelho, who provide the commentary track don’t have a lot of great things to say about the movie. Del Valle even says, kind of wearily, that he’ll give the film “as much attention as it merits” and describes the movie as “a curiosity.” The two of them spend most of their time talking about Giallo films in general, including the films of the undisputed masters of the genre, Mario Bava and Dario Argento, while occasionally going back to the movie to talk about something that momentarily captures their interest. 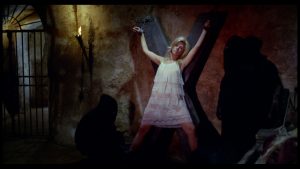 I’ve got to say, though, I really loved this film. It might have been intended as a serious work, but now it’s entered the pantheon of naive surrealist movies. The movie’s weird nature is subdued most of the time, but when it gets crazy, it really lets loose.

Released in 1969, Satan’s Doll tries so hard to be 60’s chic. Though it takes place in a small town in Italy, the local hangout, a hole in the wall bistro, is always blaring some groovy tunes where hepcat kids dance their hearts out. The main characters, Elizabeth (Erna Schurer) and Jack (Roland Carey), an engaged couple in their mid to late twenties, are impossibly good looking and drive into town in a red convertible. Jack smokes a pipe all the time, of course. But don’t confuse the pseudo-hipness of the flick as progressive: Jack is completely condescending toward Elizabeth and virtually pats her on the head with his words. Yes, yes, so you think you’re seeing ghosts who are sexually assaulting you with a whip? There, there, chin up, young lady. And stop being so hysterical.

The basic plot concerns Elizabeth and Jack driving into a one horse Italian village to claim Elizabeth’s inheritance, which is, of course, an old creaky castle. Her uncle, the previous owner of the dwelling, leaves the building to her in his will even though she hasn’t seen him since she was a kid. Because the castle is old and stinky, it is naturally haunted by ghosts, or stories of ghosts, at least. Yes, yes, castles are creepy. We all know this. But, as in most Giallos, the ghosts are just a cover for the ghastly goings-on of regular human types. 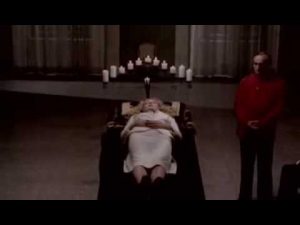 Basically, there’s a group of people who want to scare Elizabeth into selling the castle because of the valuable uranium deposits underneath. So they come up with a bizarro ghost story and begin slipping her a hallucinogenic drug with which she slowly begins to lose her grip on reality and lives in a more or less dreamlike state. This is how Elizabeth ends up getting tied to an altar and whipped with a cat o’ nine tails by the castle’s governess. Great scene, this one, but it takes a lot of time to get there. Mostly people just sit around and talk and drink tea. Anyway, as Del Valle points out in the commentary, these scenes had a lot of potential and, had the movie been made competently, could have been featured more prominently. In other words, the movie might have been a lot more intentionally surreal if the filmmakers had tried hard enough.

The real fun comes in the last fifteen minutes of the movie. Formerly mild mannered Jack releases his inner ninja on some thugs who are hired by bad guys to take him out. Jack’s a journalist and up until those last fifteen minutes, seems completely mild mannered, if a little passive aggressive. But when he’s about to get jumped, he’s suddenly Stallone and dispatches these guys without any problems. Okay, so Jack’s a ninja. Well, we all have our secrets, I suppose, and maybe these thugs are just really bad at their jobs. Because Jack pretty much kicks their ass with a series of wild punches that wouldn’t even be believable in professional wrestling. This was the part of the movie where I started clapping wildly.

And then there’s the dog. Without the dog, these supposedly competent humans would never be able to solve the mystery of who was behind these psychological attacks on Elizabeth. I mean that in the most literal sense, too. Jack asks the dog what happened to his master and the pooch leads him to the place where the bad guys buried his body. This was awesome! The fucking dog understands Italian and this is somehow fine with the characters in the movie. 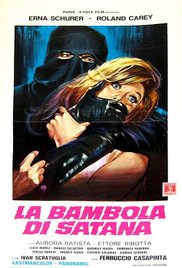 Finally, and I don’t think I’m spoiling anything here, since it would be virtually impossible to spoil this wonderful movie, we find out that the butler did it. Yes, they went there. And I love them for it. But it wasn’t really the butler. It was simply a man wearing a mask that looked exactly like the butler. I mean, literally there was no way it could be a mask because even Hollywood makeup artists haven’t figured out how to make a mask that looks exactly like another human, and gives you his voice, too. There’s a blurb on the back of this Blu-ray that mentions the Scooby-Doo-ness of this scenario, and it’s true. There is a guy under the mask, and he basically says he would have gotten away with it if it wasn’t for these kids. That was exactly what I thought as I sat on my couch clapping so hard that my hands turned red and one of my cats tried to frantically claw its way out of the window. I tried to calm it down, but apparently it doesn’t speak English. So I tried talking to the dog. Yeah, it’s a no go on that one, too. Maybe my dog only speaks Italian. Maybe all dogs speak Italian. It’s hard to say.

So, yeah, though the movie only goes completely off the rails at the end, it’s strange enough to keep a true connoisseur of this stuff at least smiling throughout. Watch it with your favorite pet, in your favorite castle.