I’m one of those curmudgeons who’s never really gotten into the whole CGI animation thing I know this is a generational thing and that kids who grew up watching this stuff won’t give a shit. And, yeah, I’m definitely aware that “hand drawn” is a misnomer anyway and that nowadays even stuff that looks hand drawn is made on computers. I’ve got to say, though: I was quite impressed with the way Harlock: Space Pirate looked. Not quite beautiful, but getting there, and as much as this kind of movie can be beautiful to a surly lover of hand-drawn animation. But Harlock: Space Pirate, released in 2013 by Toei Animation, has a very muddled script that doesn’t make a ton of sense, which makes the stunning visuals rather moot.

Directed by Shinji Aramaki from a script by Harutoshi Fukui and Kiyoto Takeuchi, Harlock  is based on a manga by Leiji Matsumoto. Harlock’s first screen incarnation was in the 1978 anime series Space Pirate, Captain Harlock. I watched the first episode of the series, which is available on Hulu, and it’s … not a bad cartoon. Pretty fun. It’s set in 2977, 1,000 years after the production of the series. Unlike the movie, Harlock is the central character. The show also has a pretty light tone, which is in stark contrast to this very dark, pretty humorless movie.

This 2013 version is pretty bleak stuff. Here, Harlock is kind of a brooding goth/emo type. 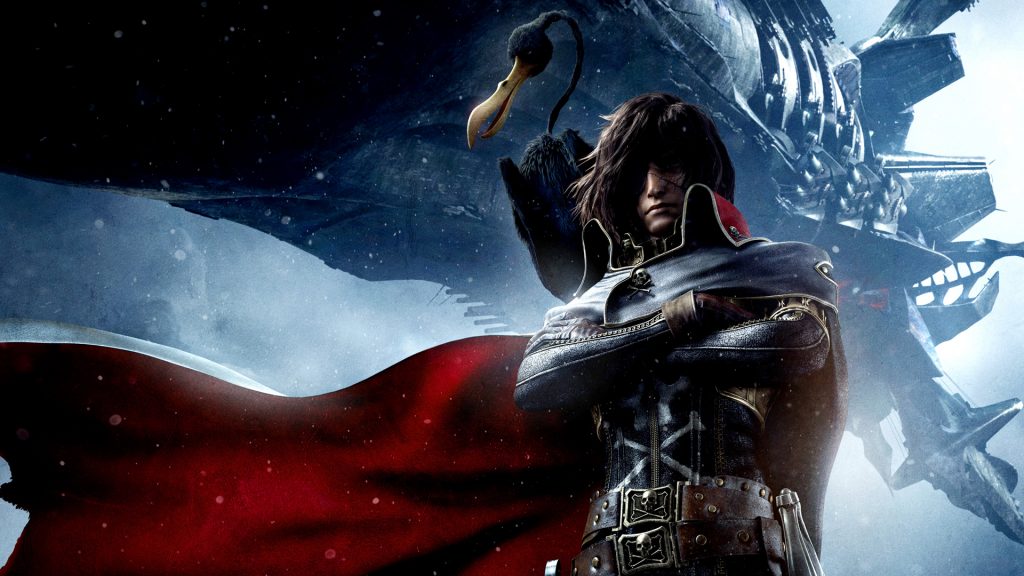 Man, the visuals are great. Oh, and the sound. Jesus, My TV has decent sound, but the whole time I was watching this thing I imagined what it would be like listening to this on a quality surround sound system. There’s some serious Star Wars-type sound design going on here. The space battles with all their lasers and explosions sound great, of course, but so does every footstep; every movement of gears on the spaceship Arcadia, the nearly indestructible ship that Harlock and his crew sail through space on.

So. We start out with a little opening narration. Ominous stuff. A stern voice tells us what’s been going on. Some sort of quasi-religious governing entity, the Gia Communion, controls the few remaining human colonies throughout the galaxy. Earth has been declared a sanctuary, a symbol of order. No immigration to the home planet is allowed, even though some people desperately want to get back. Then the narrator mentions Harlock, a bane in the Gia Communion’s side who has been haunting the that governing body for 100 years. (Yeah, by the way, Harlock’s also immortal.)

So there’s Logan, our main character. He’s a shy young man who’s been tasked with infiltrating Harlock’s ship, the Arcadia, and gathering information for the Gia Communion. Hiding among a bunch of lowlifes at a seedy bar on a seedy desert planet, the Arcadia approaches and Logan and several of the lowlife types board the ship, attempting to join the crew.

All of the potential recruits are asked why they want to join the crew. Some of the wrong answers include honor and riches. Finally, the get to Logan, who says “Freedom.” Okay. Joining a pirate ship for the freedom of being ruled by an autocratic captain seems strange. But, well, the answer works, and Logan is told to always remember that “Freedom is what unites this ship.” They really hammer this freedom bit over your head. The anarchist in me really couldn’t reconcile the idea of freedom with taking orders, but I finally figured out that they meant freedom from the laws of the Gia Communion. But the Gia Communion really doesn’t seem that bad. They’re hypocrites, but you pretty much expect that of any government made up of humans. So … they’re kind of major hypocrites. They’re telling the public that Earth is a sanctuary planet where nobody can immigrate. They use technological trickery to make it seem like the planet is the picture of order and hope, even though it doesn’t even exist anymore, having been destroyed over a hundred years ago.

Harlock has this scheme. He’s got his crew planting these sort of cosmic mines on various planets. Apparently, when they’re set off, the “nodes of time” will loosen and Harlock and his crew can go back to the past and live on Earth during a time before the Gia Communion. Okay, a little weird, but we find out later that these little bombs that Harlock is planting, when detonated, will destroy the entire universe. Yup, the whole thing. The idea is that, though humanity will go extinct, the universe will collapse, starting over again and life will once again flourish. It’s a kind of cosmic reset button. All this because he feels guilty. See, the whole reason the Gia Communion have to project a giant hologram over Earth to make it look as though it isn’t a dead planet is because Harlock has destroyed it.

See, it really was agreed that Earth would be a sanctuary planet, a beacon of hope, and that no immigration to or from the planet would be allowed. But when the Gia Communion decided to open up immigration to diplomats and other high ranking officials, the hypocrisy was a little too much for a certain brooding space pirate. So he came up with some sort of convoluted plan to use dark matter to form a protective shield around the planet so that, for real, nobody can go in or out of the planet. But the plan went very awry when the dark matter went wild and destroyed the entire fucking planet.

Basically, Harlock wants to blow up the universe because he feels very, very guilty about accidentally destroying the planet. And, I mean, he should feel guilty, but destroying the universe really isn’t a healthy way of dealing with guilt. Anyway, all this would be OK motivation for a villain, but Harlock is supposed to be the hero of the story. Sure, when his crew finds out his true motivation for planting the mines, they’re pretty pissed, but they forgive him. Even Logan switches loyalties from the Gia Communion to Harlock. Why? Gee, I guess none of them much care for the Gia Communion’s hypocrisy. Fair, enough, I suppose. Nobody likes hypocrisy, but what of the fact that Harlock wanted to blow up the entire universe? Well, he gives his crew vague promises and new-agey speak about loyalty and freedom and everything’s cool again. So that’s that. Harlock’s crew seem pretty open minded.

No question, Harlock is an impressive visual milestone. The dead dark matter earth spews large plumes of lava that can be seen from space. It’s incongruously beautiful. And the space battle about a third of the way into the movie leaves you quite breathless and you forget for a while that the story is pretty lame.

All this really begs a question: Ultimately, how good can a movie be if the story doesn’t hold up? I think the answer to that depends on how story focused the movie is. Story is of no importance to most experimental films, and of little importance to a lot of indie films that are focused on character. But Harlock is a heavily plot-based movie. Story is the spine of any plot-based movie. It can’t be seen, but if it’s broken, it’s certainly going to be felt. And I felt it. So, as great as the movie looks, it’s just not a good way to spend a couple of hours. With the right story, the next CG Toei Animation movie could be perfect. This just isn’t that movie.

A searingly funny and very loose adaptation of the traditional Three Little Pigs tale, the Tex Avery-directed Blitz Wolf premiered eight months after the bombing of Pearl Harbor and the subsequent entrance of the United States into World War […]