The detective wears black: a black suit, black pants, and a dark, dark blue tie. The apartment itself is flooded with blacks and whites and grays, opaque shadows swallowing up the spacious corners. The next-door neighbor wears black, too, her tight, form-fitting gown offsetting her sharp blonde hair and shimmering pearls. The only breaks from the blacks are the blood-red carpets flowing up the staircases and the blood-red corpse pooling in its own gore. It’s as grisly a murder scene as New York City police detective Joe Leland (Frank Sinatra) has ever seen.

Yet he hardly flinches. He’s grown used to the blacks and the secrets they harbor. But as he drives the filthy streets at night, he recalls a time where his life wasn’t all black: it was pink. Bright, vibrant pink from head to toe. Pink in the form of Karen (Lee Remick), a shimmering vision of beauty with blue, blue eyes as big and wide as his own that he meets at a collegiate ball. But when she comes upstairs to his apartment, she’s black all over—black dress, black bra, black panties. As she steps into Joe’s arms, the black New York night devours her pink, naked flesh.

Gordon Douglas’ The Detective (1968)—recently released in a wonderful (if barebones) Blu-ray transfer courtesy of Twilight Time—is one of the first true neo-noirs; not just for its chiaroscuro cinematography and plot rife with gumshoes, dames, and killing. The Detective centers on a good man trapped in a sick world, a black world of corruption driven by ambition, greed, and carnality.

This isn’t the politely sanitized world of the studio noir of the ’40s and ’50s. Here what used to be hidden as subtext is brought forward as uncomfortable context. The victim whose murder opens the film highlights this: a rich, potentially sociopathic homosexual is found beaten to death, stripped naked, and horrifically mutilated. A cavalier Sinatra tells a co-worker to collect the man’s severed penis and another to notice the semen stains on his bedsheets. A far cry from Peter Lorre giving Humphrey Bogart a lavender-scented business card, no?

The murder investigation uncovers a matryoshka doll of corruption: what begins as an open-and-shut homicide case festers into a scandal reaching from deep within the police department to the posh penthouses of the rich and famous. And all around Joe the world falls apart. The plot expands like clockwork, Abby Mann’s screenplay wonderfully adapting the textures and nuances of Roderick Thorp’s original novel (in a truly bizarre twist, Thorp’s sequel to the novel would eventually be adapted into John McTiernan’s Die Hard [1988]). 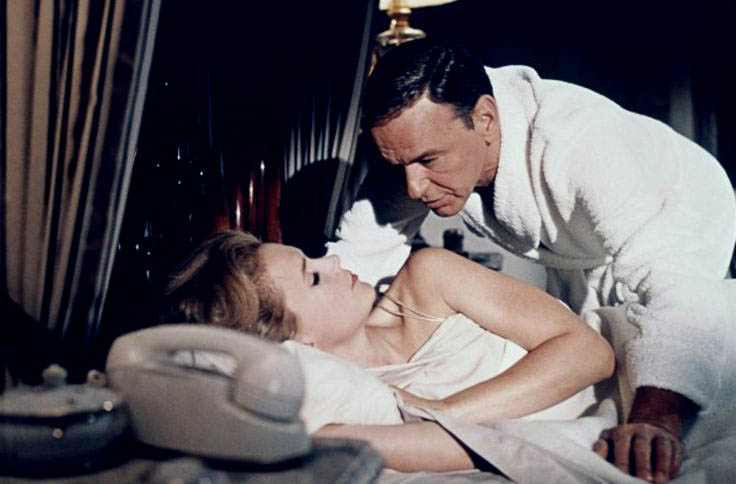 Clocking in at nearly two hours, The Detective is unusually long for a police procedural film—at least for a pre-David Fincher’s Zodiac (2007) world. Douglas, one of the last great Hollywood studio workhorses, gives the film plenty of room to indulge in atmosphere and narrative digressions. A visit to a dockside rendezvous for homosexuals reveals the extent of his colleagues’ homophobia. A promising young rookie becomes cruel and callous, using interrogation techniques he learned from documentaries about the Holocaust to humiliate and browbeat a suspected serial killer.

Joe’s marriage to Karen, a nymphomaniac tormented by a tumultuous childhood, disintegrates before his eyes. At times the film’s stillness and solemnity borders on deflation and stagnation, particularly in the second half which feels oddly disconnected from the first half.

But The Detective is about mood and disappointment.

And at the center of it all is Ol’ Blue Eyes himself. Morose and reflective, Sinatra is the calm eye of the storm. Having long before abandoned the aw-shucks persona that propelled him through an early career of Hollywood musicals and comedies, Sinatra embodies a perpetual melancholy teetering dangerously near the brink of depression.

Rarely have the lines on his face seemed more deeply etched, rarely have his eyes seemed so sad, so drained of hope and vivacity.

Recently I was talking with my husband about how most of his co-workers aren’t very savvy to retro pop-culture (classic films start in the 1980’s for this group). I mean, sure, they’re scientists; I don’t […]