If you’ve followed the Retro Set over the past few years, you’re probably aware of the individual (and mutual) obsessions that consume our editorial team. Aside from a shared love of all things classic Hollywood, retro TV and The Beatles, our Creative Director Wade Sheeler is the maestro of all things Tiki culture, Django Reinhardt and cult movies; Senior Editor Jill Blake is someone you do not want to mess with when it comes to Fredric March and ’60s rock. And yours truly can pretty much organize her life into a Venn Diagram with Charlie Chaplin, Montgomery Clift, and right there in the center: today’s birthday girl, Jean Harlow.

I remember when I fell in love with her. It was a lazy Saturday afternoon and I was cooped up in my bedroom. Having recently returned home from abroad, I was staying at home with my parents for a while, trying to get my life together, and therefore required plenty of two things to medicate the situation: wine and old movies. (Where were you, TCM Wine Club, 10 years ago??)

Already a big movie fan my whole life, I decided to dabble in a genre I really knew nothing about: Pre-code. A DVD had just come out (the now out-of-print Forbidden Hollywood release from Turner Classic Movies) and that first volume featured three films: Baby Face, Red-Headed Woman, and Waterloo Bridge. Needless to say I was blown away by all of them, (and to this day still think that the James Whale version of Waterloo Bridge is much better than its prettier, slicker re-make) but it was that fascinating creature in that second film that really caught my attention.

She was nothing like I’d ever seen or heard: she was a fireball of motion; when her body wasn’t moving that trap of hers sure was. Her character was an amoral sexpot and I couldn’t take my eyes off her.  Of course I’d known the name, Jean Harlow– who hasn’t–but it was just a name. Now, it was flesh and blood. I guess it was, in every sense of it, love at first sight. And down the spiral I went, consuming everything I could on this tragic angel who passed at the age of 26 so many many decades ago.  It may have been her Hollywood glamour that got my attention, but it was Harlow’s beautiful heart that made me a fan.

Ten years later, the mark Harlow has made on my life cannot be overstated.  She is 100% the reason I am even writing on this website today. When I first got into her movies, I just didn’t know what to do with myself. My friends couldn’t care less, nor could my family, and I was imploding from not having an outlet. Enter blogging, which gave me a place to try and put into words how I felt about her work, her life, her legend. (I even named the blog after one of her characters.) And when I moved out of my parents home and in with my roommate at a lovely ’20s cottage across the street from Paramount Studios, the writing only intensified. Now that I was living in Harlow-land, writing about her– and by extension classic Hollywood itself– became an obsession.

And from that obsession sprang an entirely new life: the friends and colleagues that I have made over the years, too many to even begin to mention here (yes, Wade and Jill are among them) are a direct result of my inability to keep my trap shut about her and the movie blogging that resulted from it. (And I still haven’t stopped…obviously!) Blogging about classic film– which is all thanks to Jean– has given me a fuller, richer life, with friends I now consider to be family, and has brought me to places in life where I never dreamed I’d be. And I credit Jean for all of it.

Thank you, Harlean Carpenter. I wish I’d known you–but thank you anyway for being the best friend a girl could ask for. 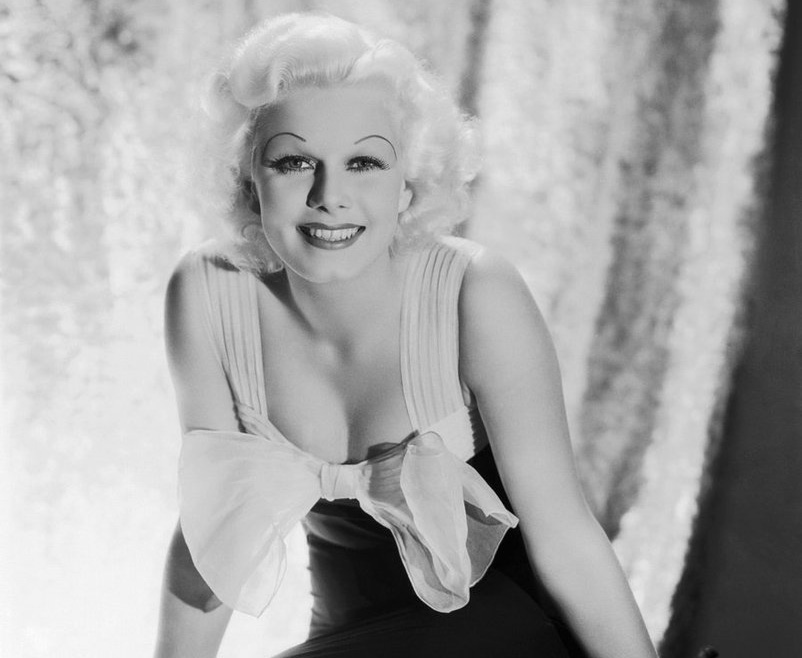 Now, we’ve done a number of phot0-heavy pieces on Jean over the years, so instead of signing off with another pictorial of the blonde bombshell in the movies … instead we’re going to mix it up with a pictorial of the blonde bombshell… in color. Obviously we at the Retro Set are against colorization of movies, but colorization of archival photography has blossomed into a real artform recently (yes, I’m obsessed with that too) and a few artists in particular who have brought Baby into living, breathing color you gotta see to believe. Victor Mascaro runs an outstanding Instsagram blog showcasing his work that you need to visit NOW if you haven’t already, and the same goes for the utterly amazing Klimblim and Claroscureaux.

The following are some of my favorites of their Harlow work.

Douglas Fairbanks Jr. never intended to go into picture making, but the environment he was born into, his good looks and innate charismatic nature somewhat “impressed” him into the industry. He was not an immediate […]

Marilyn Monroe: In Her Own Words

Had she not died at the tragic age of 36, Marilyn Monroe would be 90 years old today. The Retro Set pays tribute to the icon with a look back at Marilyn Monroe … in her own words. […]