Hiroyuki Sanada may not be a household name in the States, but he’s definitely recognizable. A bad guy in Rush Hour 3, another bad guy in Wolverine, an ambiguously sinister character in 47 Ronin, and a memorable presence in the Lost series, he’s a superstar in his native Japan. But his crossover film, nominated for Oscar’s Best Foreign Film in 2002, and which garnered him Hollywood attention, was The Twilight Samurai, and for good reason. It’s a beautiful, mesmerizing and measured piece that would fit right into the Samurai films of Kurosawa.

Seibei Iguchi (Hiroyuki Sanada) is a low-ranking Samurai working as a bean-counter for the village food warehouse in 19th Century Japan. Barely making enough to care for his ailing wife, two children and senile mother, his co-workers remark how he never joins them for sake after work, always hurrying home. In truth, he moonlights making bird cages. When his wife finally succumbs to tuberculosis, he holds an extravagant funeral, in keeping with the traditions of a higher ranking Samurai.

Soon his expenses, including the debt incurred by his wife’s funeral, overwhelm him. He does not have time to bathe, or money to repair or replace his shabby clothes. It seems nobody has much regard for Iguchi, when his childhood flame, Tobei, returns to town after getting a divorce from her abusive husband. There’s no secret the two are still enamored with each other. It seems Tobei had married for position rather than love, and now, ingratiates herself into his family by caring for Iguchi’s children and mother while he’s at work. But soon, drunken abusive ex-husband shows up, challenging Iguchi to a fight. 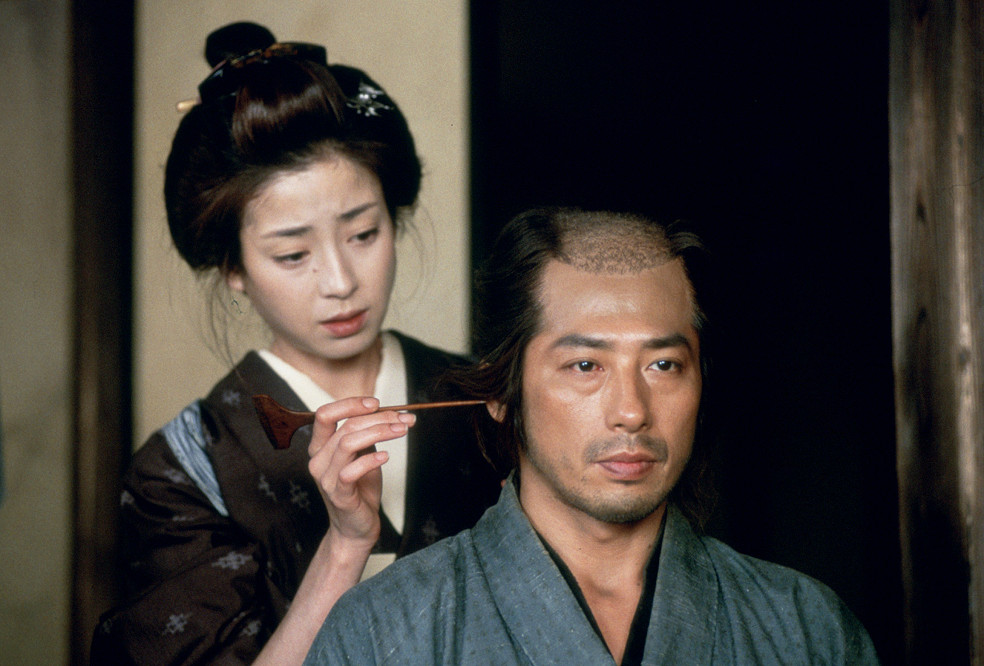 Generally, a samurai film has a good deal of swordplay. Not always, though, and other than Seven Samurai, Kurosawa’s films were somewhat sparse with actual combat, forcing the viewer to almost explode in anticipation for a fight to play out.

Twilight Samurai’s director, Yôji Yamada, understands that deft touch well, allowing for only two scenes of combat, and only one – ONE(!) – actual Samurai battle. But it is all well worth it.

When Iguchi faces off against Tobei’s ex – it’s not with a sword, but a hefty stick of wood. Because Iguchi (and the audience) knows he’s a master Samurai, he could easily slay the ex, and so teaches him a lesson in a perfectly directed and edited sequence.

Word travels fast in the little village, and Iguchi’s skill in the duel reaches the ear of a ranking town official. Simultaneously, a coup topples the leadership of the clan, and an imminent shift in power is coming. Just as Iguchi is getting the nerve to ask Tobei for her hand, he is summoned to fulfill his duties as a samurai and bring in a Samurai retainer who has refused to relinquish his post, killing all “comers” who dare darken his doorstep. Now, on the eve of his proposal, he must face certain death, or else his children will be sacrificed. The stakes couldn’t be greater as Iguchi marches off. I won’t give up the goods, but it is a powerful, two-fisted and satisfying end to an incredible film. 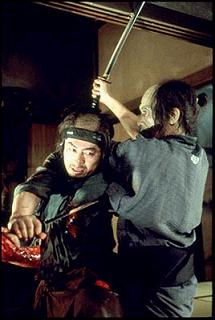 Twilight Time’s Blu-ray release of The Twilight Samurai is, as usual, short on extras, but the print transfer is immaculate; delivering on the muted tones of Yamada’s earlier scenes, with color saturation slowly transitioning to a deeper richness as the film progresses. Director Yamada made two more Samurai films to complete a trilogy, and the hope is the Screen Archives label will soon release 2004’s The Hidden Blade  and 2006’s Love and Honour.

In the meantime, we have this beautifully rendered film to start things off. Not only a great introduction to the work of Yôji Yamada, but also Hiroyuki Sanada – a leading man in the making.

The Twilight Samurai is available through Screen Archives Entertainment label Twilight Time (no connection!) label as an MOD Blu-ray